The Equipment Leasing & Finance Foundation (the Foundation) has released the December 2019 Monthly Confidence Index for the Equipment Finance Industry (MCI-EFI). Designed to collect leadership data, the index reports a qualitative assessment of both the prevailing business conditions and expectations for the future as reported by key executives from the $900 billion equipment finance sector. Overall, confidence in the equipment finance market is 56.2, an increase from the November index of 54.9.

When asked about the outlook for the future, MCI-EFI survey respondent Valerie Jester, President, Brandywine Capital Associates, said, “We are experiencing a strong finish to the year and the fourth quarter. Given all the distractions of the national political stage, I am a bit surprised. The tariffs that were imposed earlier in the year are having their effect on certain industries, but we continue to see good investment in equipment with the predominance of our customer base. I believe many have learned to tune out the ‘noise’ and focus on the necessities to compete in today’s markets. Waiting to make certain equipment investments is just not optional if you want to stay in the game.” 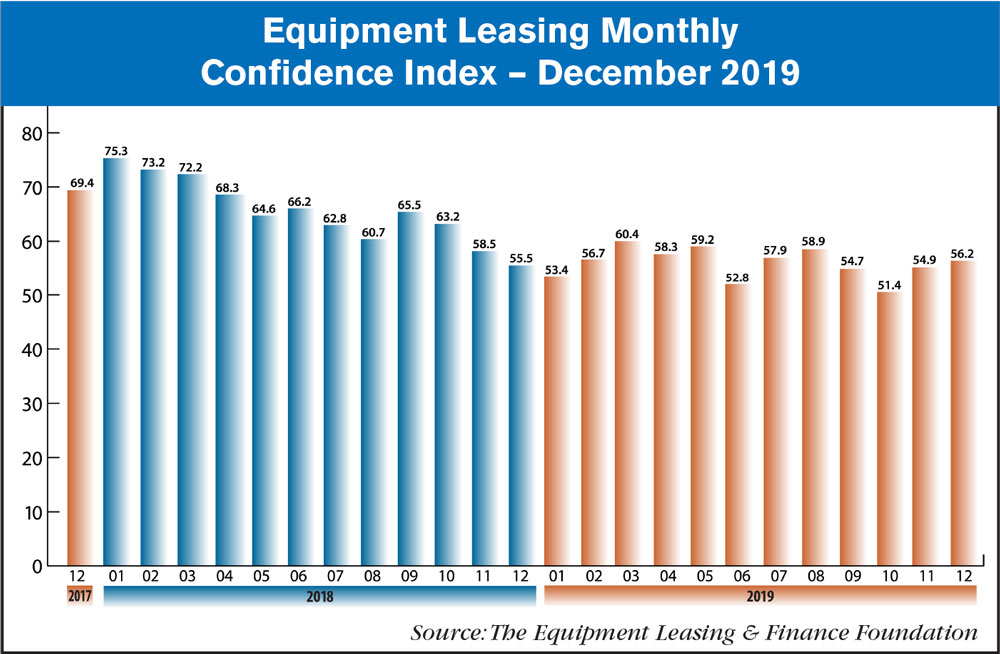 “We’re more hopeful than optimistic that there is pent-up small business capital equipment demand that will release and spur increased financing volume. We wonder whether the trucking recession is the canary in a coalmine for future problems, or an isolated sector problem.” Quentin Cote, CLFP, president, Mintaka Financial.

“Our volume, credit quality and portfolio performance have all remained strong. Economic indicators are positive. Moving into an election year and the uncertainty that comes with it may cause stagnation.” David Normandin, CLFP, president and chief executive offier, Wintrust Specialty Finance.

“Demand for financing within our core commercial & industrial loan business remains steady, and the pipeline is strong into the beginning of 2020 indicating continued pent-up demand for capital expenditures. Money costs remain at all-time lows, which may continue to fuel growth. Unemployment numbers continue to decline. Admittedly there is uncertainty in some sectors such as rail, but these seem to be cyclical in nature and focus primarily around energy. We do anticipate growth in the plastics sector to offset some of this.” Frank Campagna, business line manager, M&T Commercial Equipment Finance