Dealers and Manufacturers Search for Opportunities in Hemp

The budding hemp industry has potential opportunities for equipment dealers and manufacturers, but growers might not be ready to buy just yet, according to Ag Equipment Intelligence’s latest research report. Cervus Equipment, one of John Deere’s largest ag equipment retailers, see sales slide 19% in their third quarter. In the Technology Corner, Jack Zemlicka talks about autonomy in ag equipment and what the first applications are forecast to be. The American Farm Bureau Federation reports that farm bankruptcies rose year-over-year in September, and an event at the Federal Reserve Bank of Chicago sheds light on how conservation practices might benefit growers in the future.

With the hemp market showing considerable growth in 2019, some dealers and manufacturers are beginning to look for opportunities to equip and assist this new breed of farmer. The potential for ag equipment in the hemp space, however, remains uncertain.

According to Ag Equipment Intelligence’s most recent research report, “Industrial Hemp: Possibilities & Potential for the Ag Equipment Industry,” a variety of equipment can be used to plant and harvest this new commodity, though not all farmers are using it. 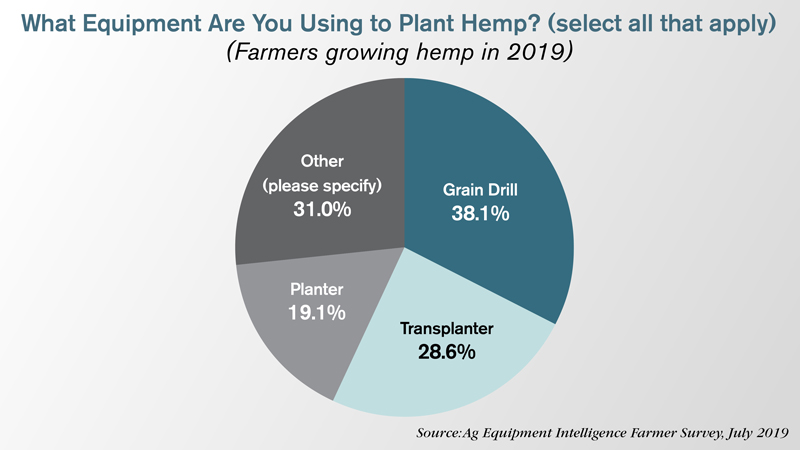 Results from Ag Equipment Intelligence’s hemp farmer survey show that 38% of growers indicated they used a grain drill in the 2019 growing season. Notably, of the farmers who wrote in answers to this question, 26% indicated they planted their hemp by hand, showing that not all growers were sold on mechanization of their hemp production. 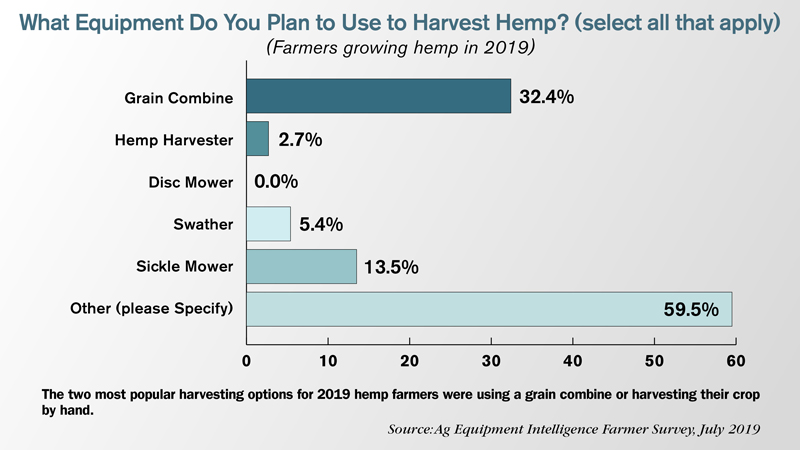 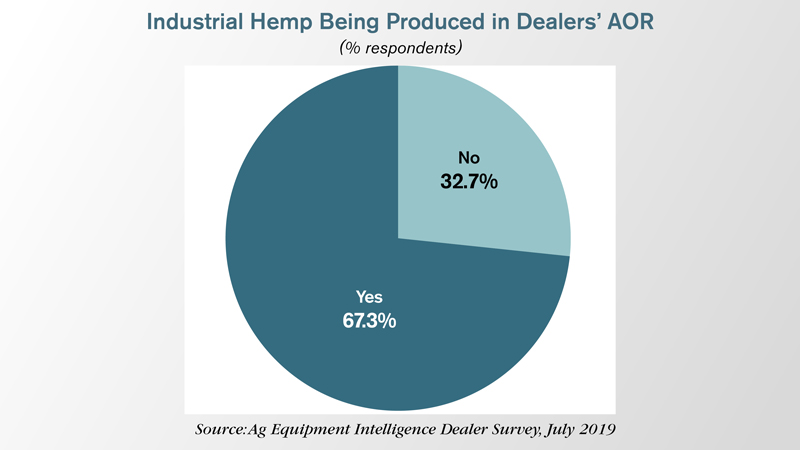 Dealers should keep an eye on the hemp growers in their area. While smaller operations may not require much equipment, hemp crops larger than a few acres may not have the manual labor to cultivate by hand and future growth of these large acreage plots could mean opportunities for dealers and manufacturers alike. Dealers should also watch shortline manufacturers, several of whom have stepped in to equip farmers with the niche hemp-specific equipment, including modified tobacco harvesters, aftermarket combine kits and hemp seed discs.

“Industrial Hemp: Possibilities and Potential for the Ag Equipment Industry” is available for purchase at www.AgEquipmentIntelligence.com/HempReport.

Calgary-based Cervus Equipment, one of John Deere’s largest ag equipment retailers with 36 store locations, reported that its consolidated revenue for the third quarter of 2019 ended Sept. 30 declined by 19% year-over-year. Total revenues for the quarter were down from nearly C$393 million in the third quarter 2018 to C$317 million in the same period of 2019. In addition to its ag equipment segment, Cervus also does business in trucking and industrial equipment. 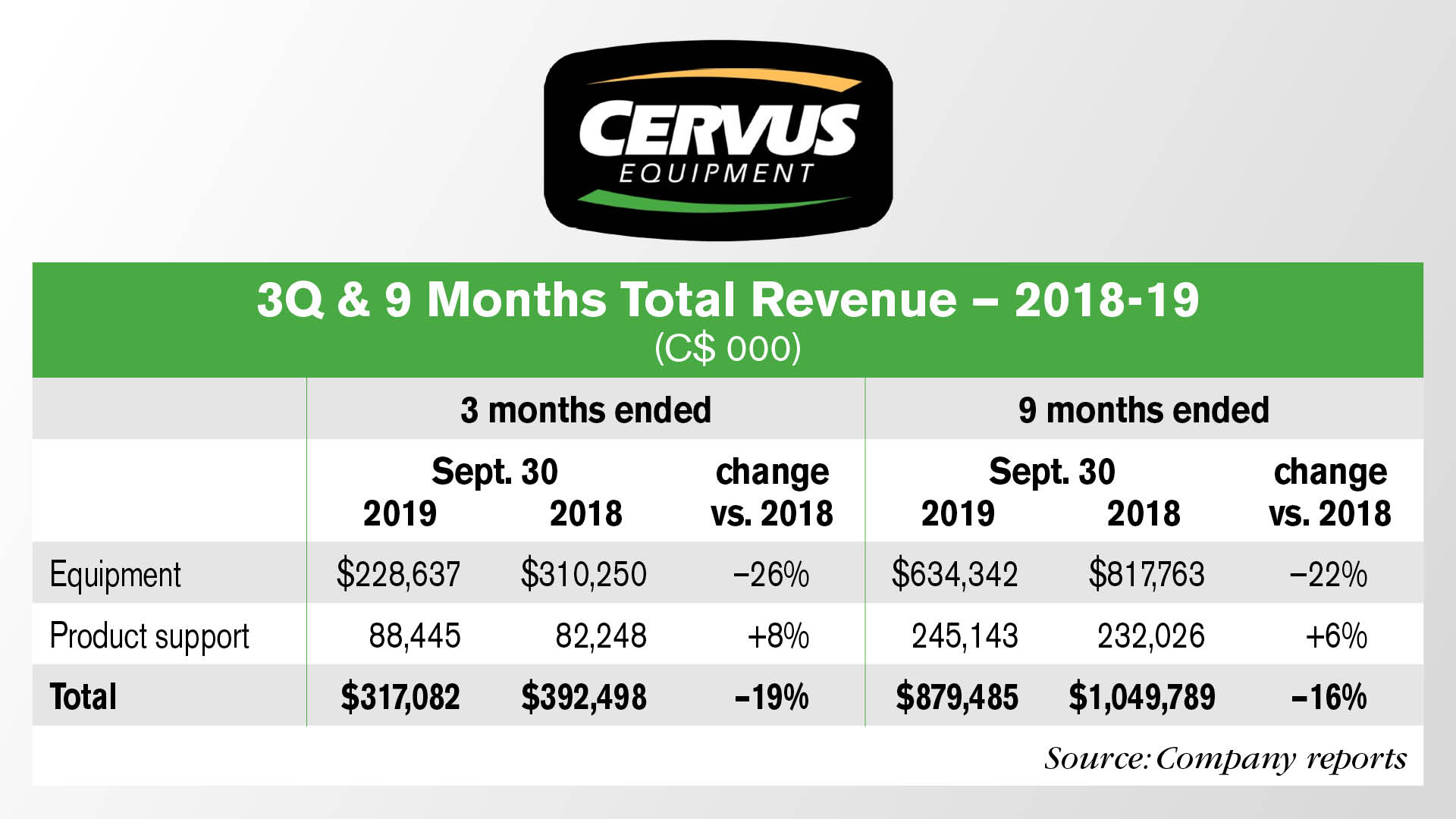 Total new ag equipment revenue for the period was $82 million, down 43% from $142 million in the third quarter of 2018. Used equipment sales also fell by 7% to $94 million, down from $101 million vs. a year earlier.  This was partially offset by an 14% increase in parts sales and an 10% uptick in sales of service during the quarter. 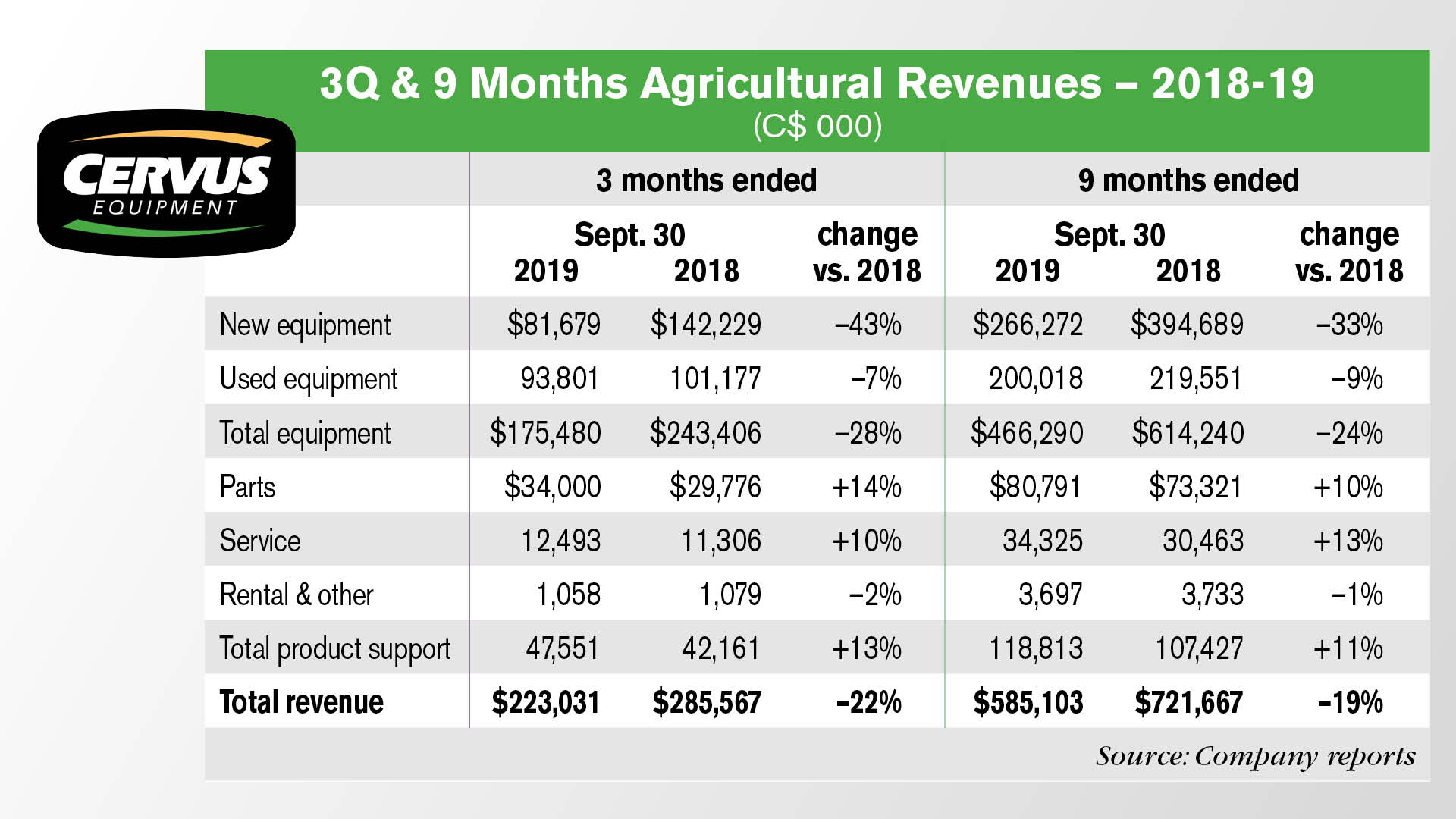 Cervus said it reduced its ag equipment inventory by $33 million, or 18%, compared to the second quarter of 2019. The dealership group said this is below inventory levels reported on Sept. 30, 2018 and Dec. 31, 2018. “Inventory write-downs associated with this aggressive reduction increased $6.5 million in the quarter and $4.9 million year-to-date compared to 2018,” said Cervus management. “These actions have enabled progression toward an appropriate level of used inventory more in line with market demand.”

Farm credit conditions in the Federal Reserve’s Tenth District continued to weaken in the third quarter of 2019. Despite a slight increase in the price of some agricultural commodities and additional support from government payments, farm income and loan repayment rates declined at a modest pace. 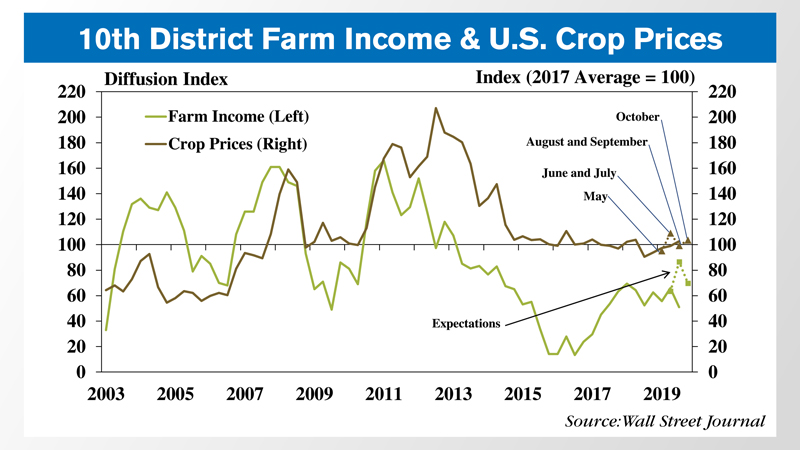 Farm income in the region continued to decline, according to the Kansas City Fed’s Survey of Agricultural Credit Conditions. Despite slightly higher crop prices and support from trade relief payments, farm income decreased compared with a year ago. The bankers’ surveyed indicated that farm income declined more than had been expected a quarter earlier. 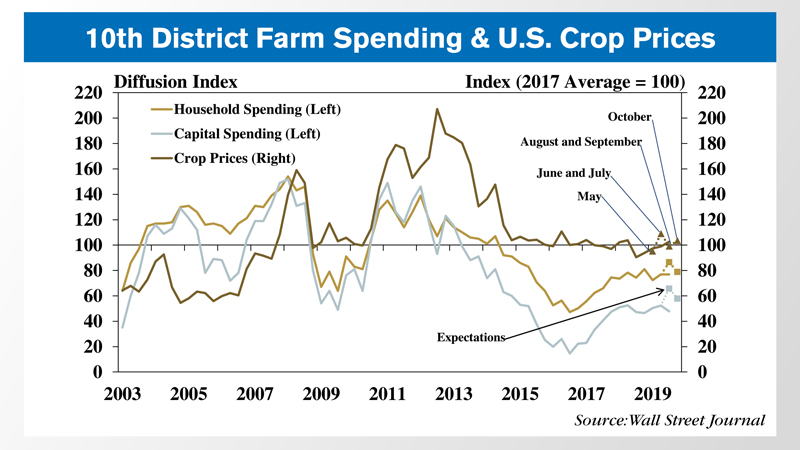 In response to the ongoing environment of subdued revenue, farm borrowers made additional cuts to spending. Amid tight profit margins, operators have reduced capital spending at a consistently faster pace than household spending. Bankers indicated they expect that trend to continue. 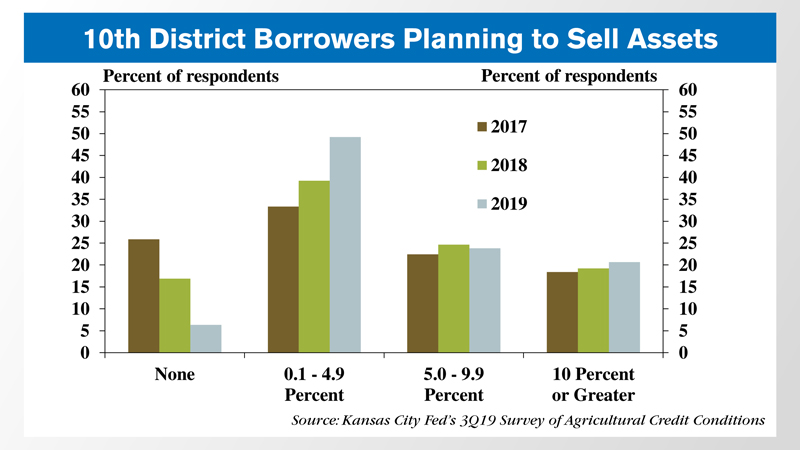 According to the KC Fed survey, steady deterioration of farm finances led to a modest number of borrowers selling assets to improve liquidity. Similar to last year, about half of District bankers indicated they expect at least 5% of their borrowers to sell assets before year-end. Almost all survey respondents indicated they expect some borrowers to liquidate assets, such as machinery or land, before the end of the year in an effort to improve available working capital or make loan payments.

With record high debt and more farmers extending their repayment terms, Chapter 12 farm bankruptcies remain elevated, according to a report from the American Farm Bureau Federation. 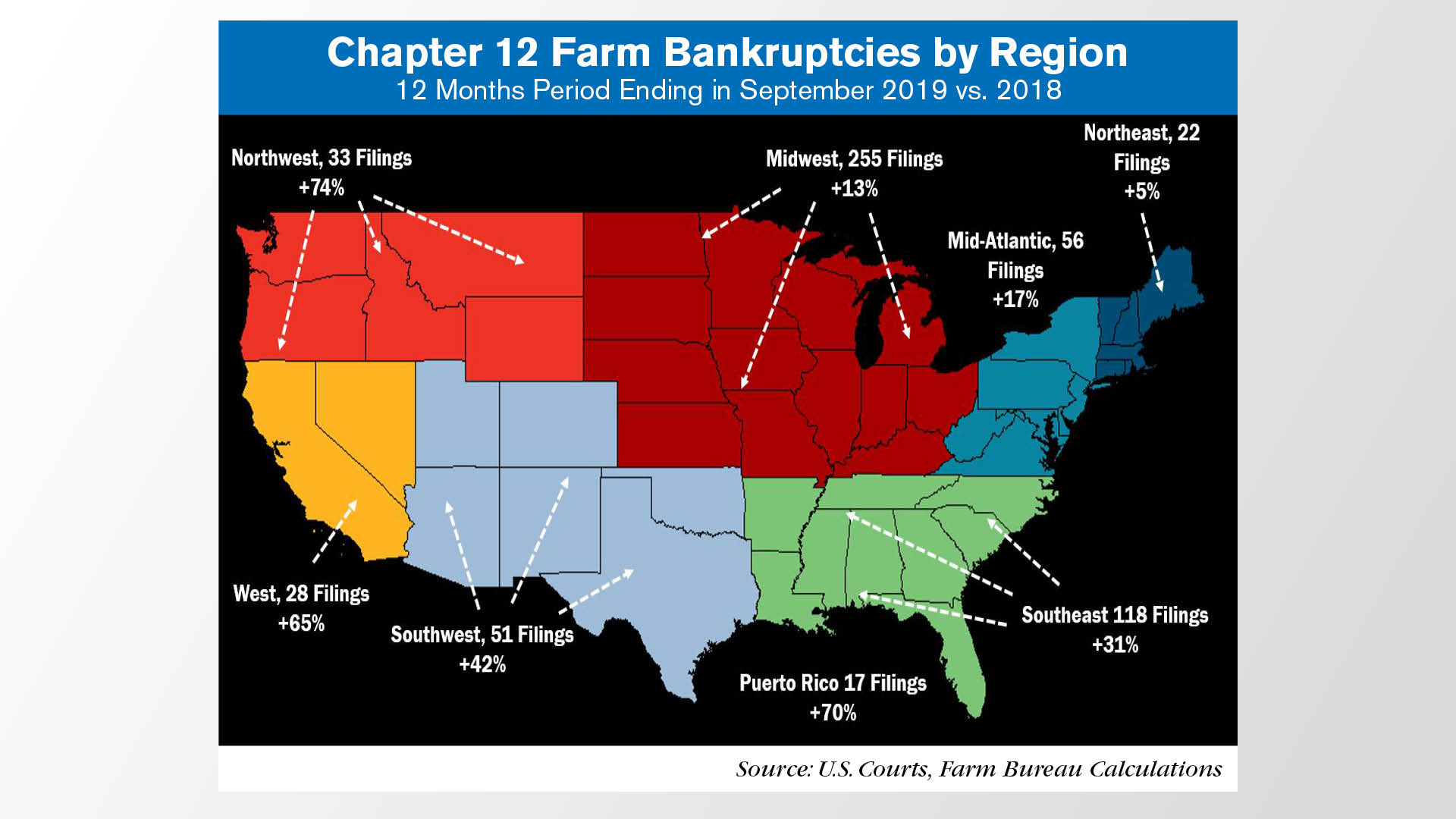 Data from the U.S. Courts reveals that for the 12 month period ending September 2019, Chapter 12 farm bankruptcies totaled 580 filings, up 24% from the prior year and the highest level since 676 filings in 2011. Notable increases were in the Northwest region at up 74%, the West up 65% and the Southwest up 42%. 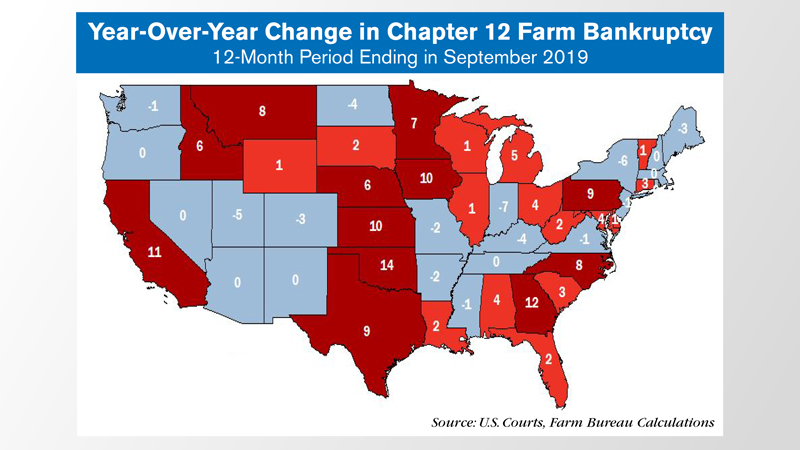 USDA currently projects farm income in 2019 to reach $88 billion. This is the highest net farm income since 2014’s $92 billion. However, nearly 40% of that income — some $33 billion in total — is related to trade assistance, disaster assistance, the farm bill and insurance indemnities and has yet to be fully received by farmers and ranchers

Agritechnica 2019 wrapped up last Saturday and our editors were on hand for the show. Held every other year on the 250 acre fairgrounds in Hannover Germany, with over 2,800 exhibitors and 450,000 attendees from 152 countries, Agritechnica is considered the premiere event for the global agriculture industry that showcases the latest innovations to shape the future of farming. 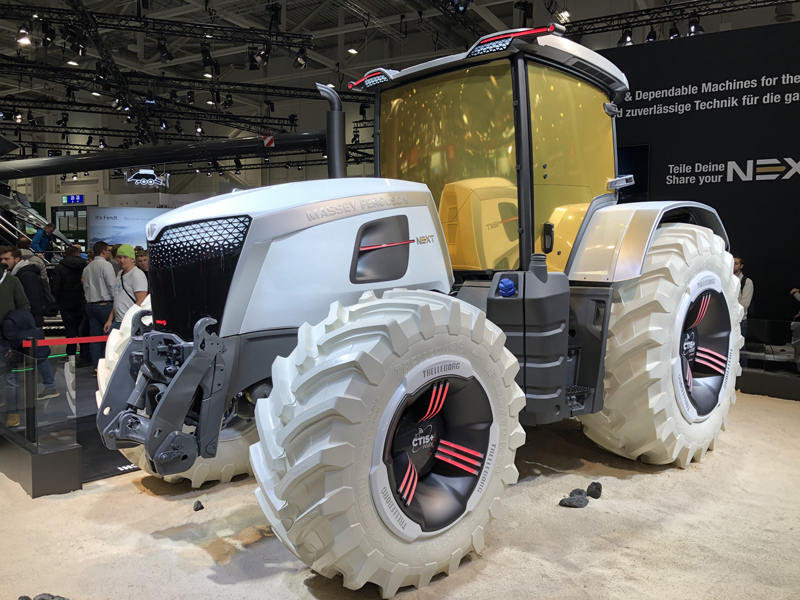 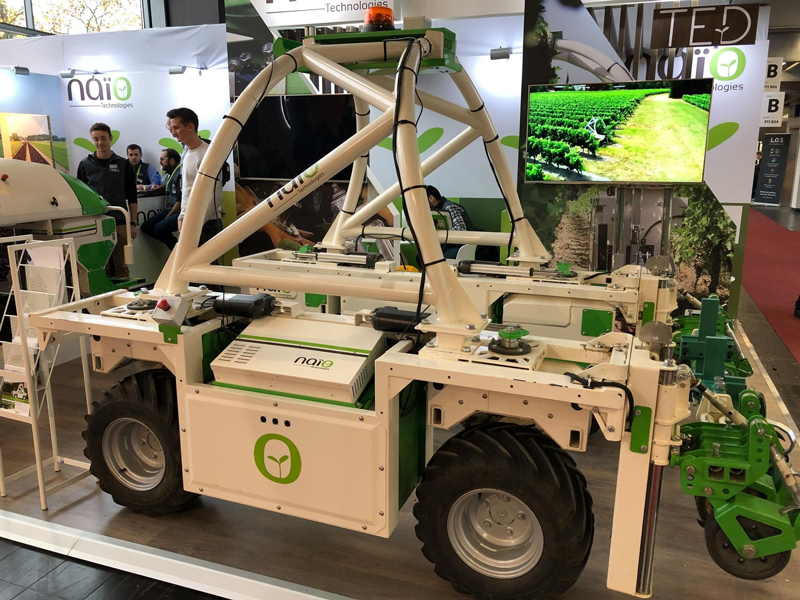 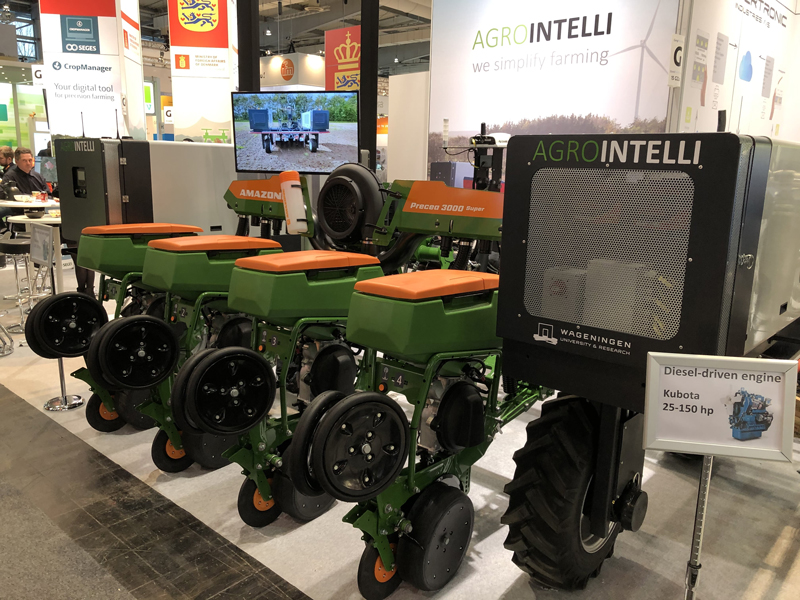 For 2019, there was no shortage of technological innovations with companies from around the world highlighting the latest advancements in areas of Internet of Things, and telematics, machine and field data analysis, sensors and precision application.

What was most striking was the advancements in autonomous farming with several companies, some well known and many fresh on the scene, introducing new autonomous platforms including the TED weed management platform for vineyard operations from Naio Technologies, that currently has 15 units currently in operation.

Robot Sprayers First to the Field?

One of the critical drivers of widespread adoption of autonomous ag technology will be cost vs. value.

Like any new technology, there will be a learning curve and fusion onto the farm will be gradual. Dr. Scott Shearer, ag engineering professor at Ohio State University, doesn’t foresee automation being a wholesale replacement to human oversight on the farm.

He views error correction with sprayer applications as the most practical and economic entry point for robotic implements to prove their value on the farm. The opportunity to avoid the expense of custom application and improve safety are two factors driving momentum for autonomous application technology.

“I think personally, two-thirds of the misapplication problems can be corrected because they're all related to human errors. Either the human that set up the sprayer or the one that was sitting in the seat when they were driving. So that's one of these things that's coming and it's going to change the way everybody looks at spray application. I don't think there's any question about it, but again, who's going to come up with that first? I'm going to call it field view for spray application. And what I'm talking about is real data set to backup with the quality of application is.

Shearer adds that as companies commercialize smaller, autonomous sprayers, it could reshape the manufacturing model, with less reliance on high-clearance models in the future and more emphasis on parts and service for the robotic versions.

Do Farmers Benefit from Sustainable Agriculture?

The key practices in this style of farming involve reducing tillage, using cover crops, cattle grazing and nutrient management. Analysis from the American Farm Bureau Federation says, “U.S. farmers … are producing more crops … and livestock than ever before, while using less water, protecting against erosion and conserving more soil.” A major switch in cropping practices can be bumpy for growers, however, and can come with some disadvantages in the short term. 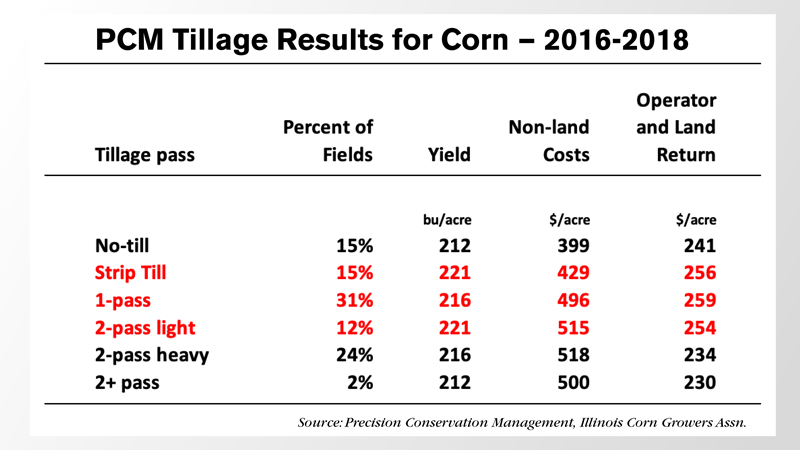 Incentivizing growers to see the benefits in conservation practices was a key topic at an event this week at the Federal Reserve Bank of Chicago. There Gary Schnitkey, a professor of Agricultural Economics at the University of Illinois, broke down the sustainable practices his team has seen used across Illinois. According to Schnitkey, strip-tillage had shown the second highest return per acre on corn crops between 2016-18 in Illinois at $256 per acre, just $3 per acre below 1 pass tillage. Schnitkey also noted, however, that what’s best for the environment does not always appear to be what’s best for growers, giving the example of data his team had gathered on cover crops.

“The issue with cover crops is, when we look at our PCM [Precision Conservation Management] data, we don’t see that they’re unprofitable, but it also doesn’t increase profits. And you’re changing your production practices, making them a bit more difficult probably or something new. We’ve got to get over that area and finds ways to improve profitability, make the management easier and that’s the whole key to adoption.” 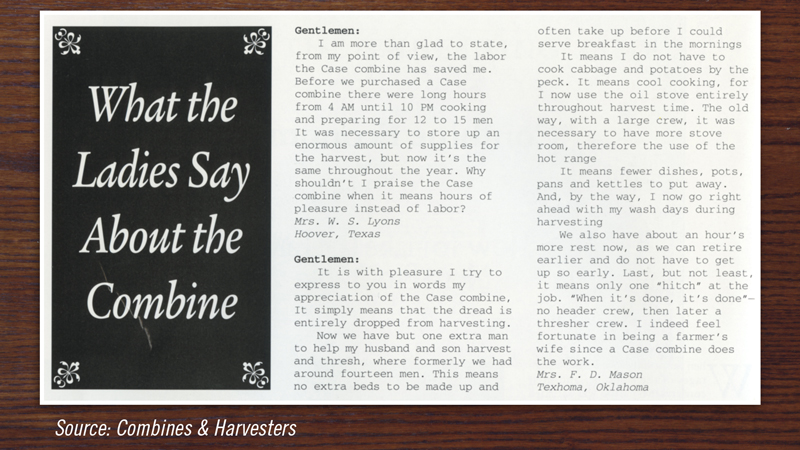 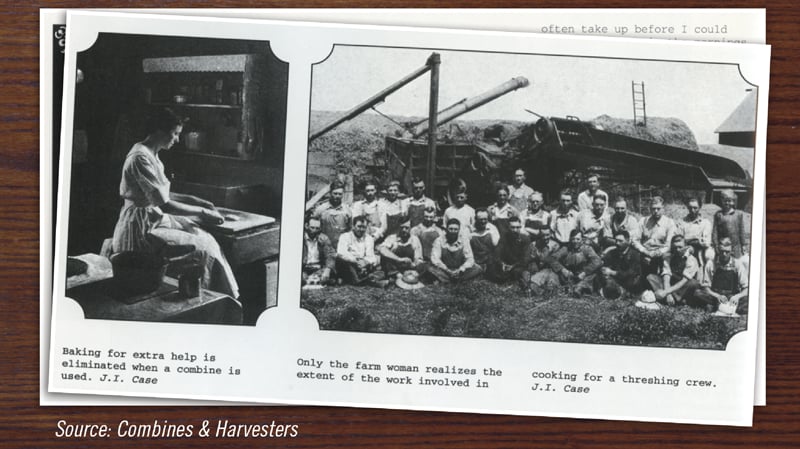 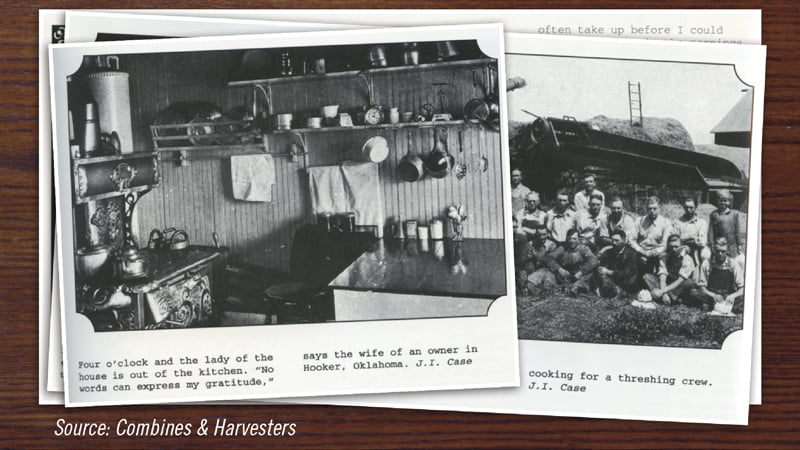 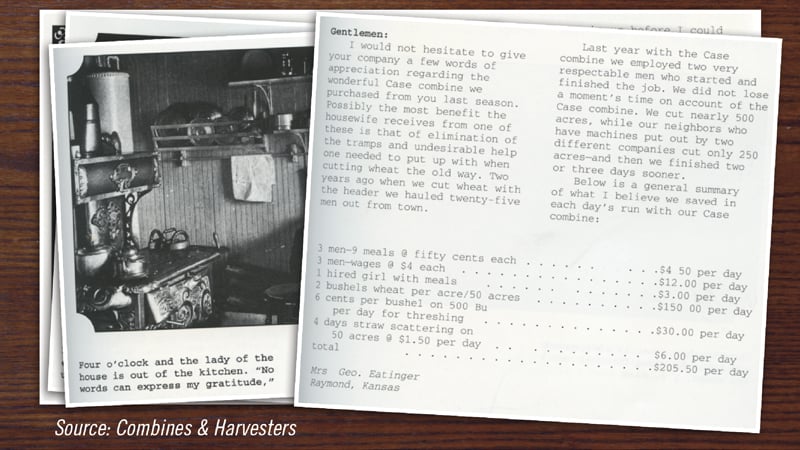 The introduction of the combine cut down the amount of time and number of men needed to harvest a crop. But in the 1930s, Case took a different angle in selling its combine. Not only would it ease the workload of the farmer, but also of the farmer’s wife. According the ad from the 1930s, “The combine eliminates cooking and board bills for such large crews! No more long weary hours of cooking for these large crews of hungry men, and no strange labors in the home. Many farm women, and their husbands too, dread the approach of harvest and thrashing because it means strange men about the place; a combine helps protect you and your family.”

As always, we welcome your feedback. You can send comments and story suggestions to kschmidt@lessitermedia.com.

[Podcast] On The Record: Dealers and Manufacturers Search for Opportunities in Hemp

Report Weighs Opportunities and Risks of Betting on Industrial Hemp

AGCO, CNHI Report Revenues Down in 2019

The latest episode of On the Record is now available! In this week’s episode we take a look at some of the more concerning aspects of AGCO’s new Dealer Sales and Service Agreement. In the Technology Corner, Jack Zemlicka discusses precision technology adoption among no-till farmers. Also in this episode: farmland values hold steady, European dealer sentiment improves, private equity firm Westcap invests in Degelman and Deere’s latest earnings report.
View More