The latest episode of On the Record is now available! In this episode we discuss the preliminary results of Ag Equipment Intelligence and Farm Equipment’s 2020 Dealer Business Outlook & Trends survey, which indicates that overall dealers aren’t as optimistic heading into 2020 as they were a year ago. We also discuss how ag tech data company Conservis is developing tools to help farmers connect real-time field data with financial reports. Also in this episode: IFS regulations on bonus depreciation and interest expenses, positive sales trends for a number of product categories, Deere’s new CEO’s focus on the U.S. market and more.

Preliminary results of the Ag Equipment Intelligence-Farm Equipment 2020 Dealer Business Outlook & Trends survey show that overall, North American dealers aren’t quite as optimistic going into 2020 as they were last year at this time. 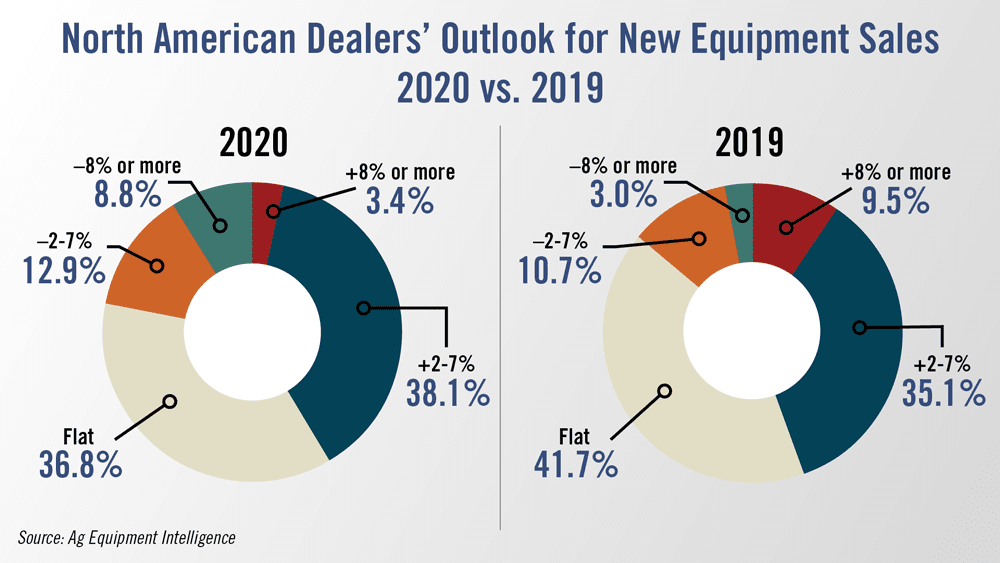 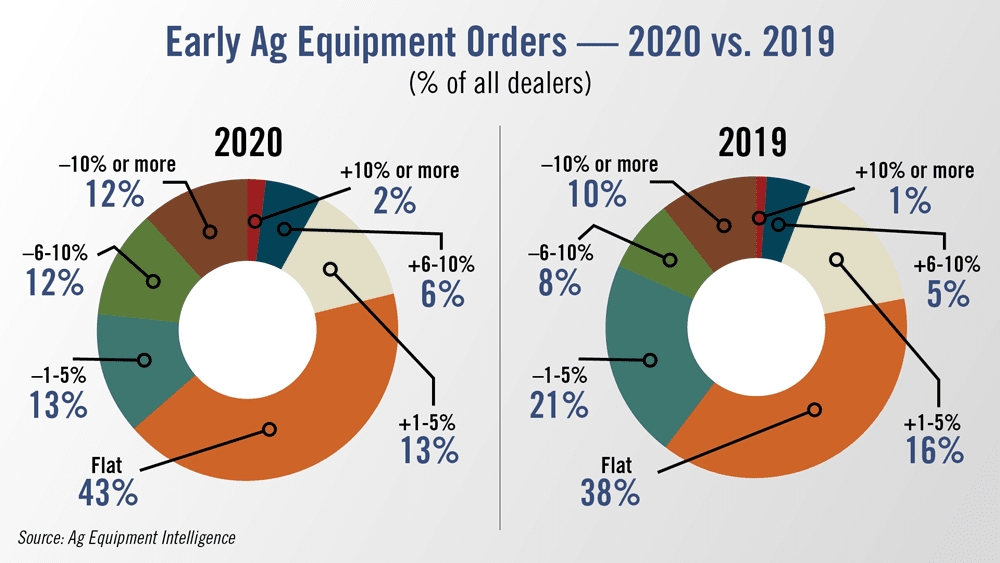 This week’s Dealers on the Move include the Brandt Group of Companies, Royal Reesink, Titan Machinery, Goosenburg Implement and A.C. McCartney.

Brandt acquired 13 locations in Ontario, Quebec and Newfoundland and Labrador from Nortrax Canada and Nortrax Quebec.

And now here’s Jack Zemlicka with the latest from the Technology Corner.

Is Data the New Cash Crop?

Data sharing continues to be a source of both opportunity and irritation within the ag industry. While some farmers have pursued the potential advantages of sharing field data, others are reluctant to grant access, control or ownership of that information to third parties.

But regardless of what is driving the decision-making process at the field level for farmers, companies are aligning to leverage and capitalize on the value of collected farm data.

So what approach to soliciting farmers for their data will they be most receptive to, in terms of compensation? Going forward, it may not be purely financial, says Patrick Christie, founder of Conservis.

“For most of the farmers we talk to, it’s one of two things. They want to have control of where their data goes, and in many cases are more than willing to share or even have an exchange of value. I’ll give you access to my data, or give you my data, but I’m going to get something in return and it may not be cash. It may be insights. It might be a trading partner that is able to provide a premium because you are able to disclose certain data sets. But that’s a very personal decision. That’s not a benchmarking. That’s not a group of farmers. That’s ‘I’m going to put value in my data because of this commercial transaction we can create.”

Christie adds that control remains an important factor in farmers’ decision to share farm information and a key to increased data sharing will be showing farmers the practical benefit on individual operations.

The U.S. Internal Revenue Service has issued its final and proposed regulations that clarify bonus depreciation and interest expense for dealerships with floorplan financing, according to the Equipment Dealers Assn., and it may be the best news farm equipment dealers have gotten in some time.

If a dealership’s overall interest expense, including floorplan interest, is below 30% of adjusted taxable income, it will be eligible to take 100% bonus depreciation. In addition, eligibility to take bonus depreciation is determined on an annual basis.

“Therefore, even if a dealership has to use the floorplan exception one year in order to deduct all of its interest expense (thereby losing the ability to take bonus depreciation in that year), it may still be eligible to take bonus depreciation in subsequent years if overall interest expense falls below 30% of adjusted taxable income in that given year,” explains Rex Collins, principal at HBK CPAs and Consultants.

But, the real icing on the cake, Collins says, is how this ruling can be used for tax planning purposes.

“So what's in it for the dealer is good news for those who were impacted by their 30% limitation that I talked about. But now let's say you're a dealer and we've got planning of opportunities if it looks like I'm going to be below the 30% interest deductibility threshold, and  I'm if I'm on the fence about well, I need to build a new building, I need to do an image upgrade or I need to expand or I need to buy a lot of shop equipment or I'm buying another dealer out … A lot of different scenarios here and I'm going to be buying a lot of their assets I want to take bonus depreciation. So if it looks like I'm going to be under, I want to hurry up and get that done in this year or if it looks like I'm going to be over the 30% or outside of that 30% limitation and not be able to take bonus this year, let's say from 2019. I want to push that transaction off or those improvements off or those acquisitions off until 2020 when there’s a chance I could take accelerated 100% bonus depreciation.”

While both July and August saw improvements in most sales categories, the growth from July to August was generally larger than that seen from June to July. 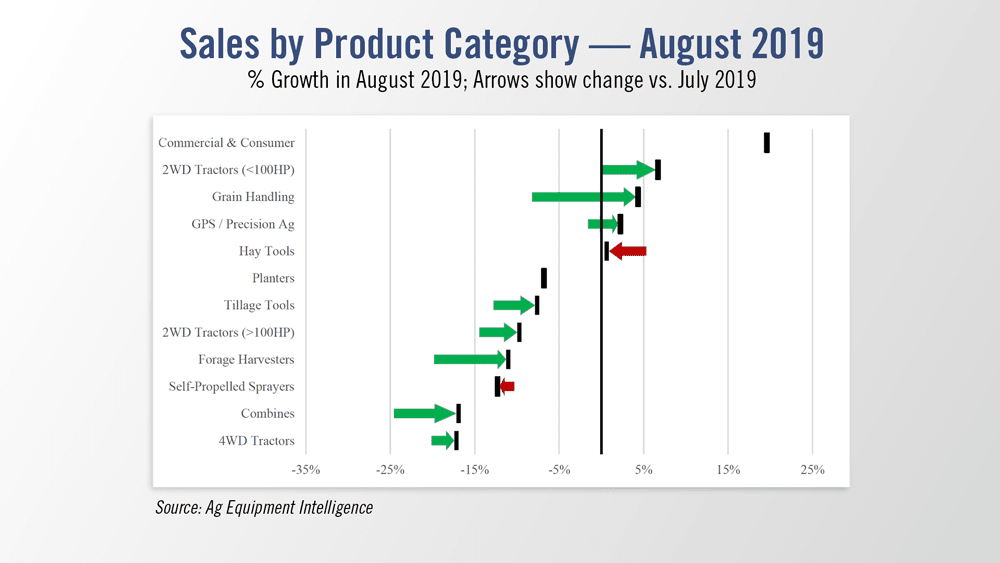 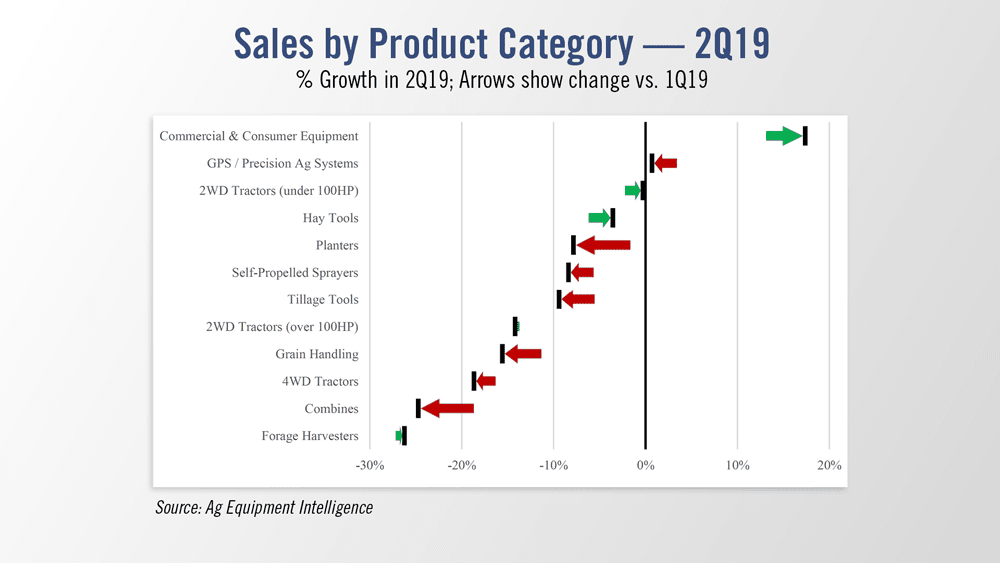 Analysts are predicting that John Deere’s incoming CEO, John C. May, will bring the manufacturer’s focus back to the U.S. amid a struggling international presence, according to a Sept. 22 report in The Wall Street Journal.

With demand for farm machinery receding worldwide, dealers and industry analysts say they expect May to focus on cutting costs and adding new technology and data services to Deere’s equipment in order to justify higher prices in the U.S.

The focus on new technology aimed at U.S. farmers is a pivot from current CEO Sam Allen’s emphasis on selling more of Deere’s equipment in developing markets overseas, which translated into a series of John Deere factories opening in Brazil, Russia, China, India and elsewhere.

Deere has said it would decide this fall whether or not to close some of its worldwide network of around 50 factories.

May will become CEO in November, while former CEO Sam Allen will remain chairman of the company’s board.

In its nationwide survey of 400 U.S. agricultural producers, Purdue University researchers noted that, overall, growers remain confident the ongoing trade dispute with China will ultimately be resolved in a way that benefits U.S. agriculture. 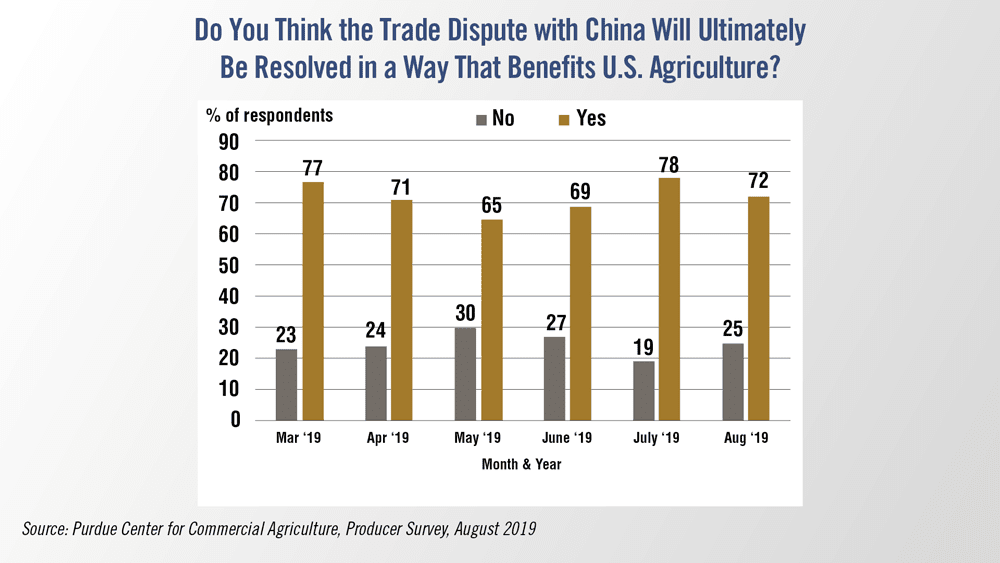 In March, 77% of farmers in the survey expected a beneficial outcome to the trade dispute with that percentage subsequently declining to 65% in May before rebounding in July to 78%. There was a modest sentiment shift in August as the percentage of farmers expecting a positive outcome for agriculture to the dispute slipped to 72% while the percentage who said they did not expect a favorable outcome for U.S. agriculture rose from 19% in July to 25% in the most recent survey.

As Caterpillar dealer Thompson Machinery celebrates its 75th anniversary this month, the company reflected on its luck of “being in the right place at the right to time” when Caterpillar came knocking. Originally a GMC truck dealer, in 1944  in the midst of World War II, Thompson Machinery was approached by Caterpillar who was in town interviewing people who might be interested in becoming a dealer. 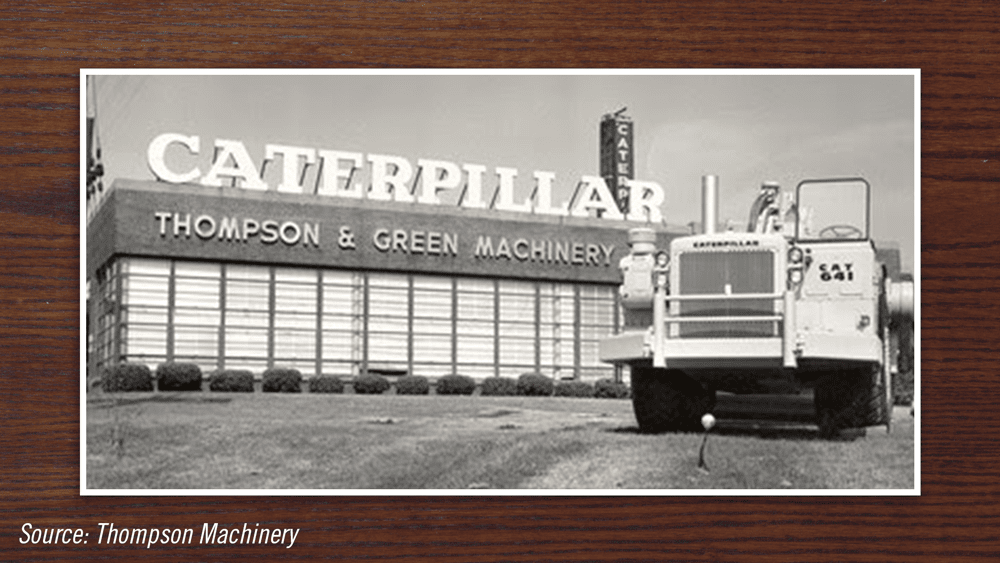 Shortly after that fateful phone call, DeWitt Thompson Jr. and his business partner George Green were selected out of 16 applicants and formed Thompson and Green Machinery.  One of the reasons for Caterpillar's selection was DeWitt and George's philosophy of providing excellent service in support of sales, a key component to the success of their GMC truck dealership.

Because of the war effort, new products from Cat factories for dealer distribution were limited. Thompson and Green would simply "book" a sale and put each buyer in line for delivery based on date of sales order.  There was a waiting list for every tractor and motor grader offered, and customers would routinely drop by the office to ask where they stood in line.  With the supply of new machines being limited and customers needing equipment, Thompson and Green would acquire old tractors that were badly worn and completely rebuild them, a practice which remains a large part of their business model today.