How Real is the Potential in the Hemp Market?

The latest episode of On the Record is now available! In this week’s episode we look at the emerging hemp industry and what it could mean for the farm machinery business. In the Technology Corner, Jack Zemlicka shares some insights on how ag start-ups, particularly on the software side, could offer some lucrative opportunities for dealers. We also discuss tractor and combine sales first half of the year for and what we might expect the second half of the year. Also in this episode, dealers and manufacturers say hay and forage equipment sales have seen a nice pick up recently, and we discuss the moderate increases in non-real estate farm lending.

The de-scheduling of hemp from the Controlled Substances Act has set off a flurry of activity in agriculture that is reminiscent of that when the passage of the Renewable Fuel Standard was passed by Congress, which set mandatory levels of biofuels that were to be used in automobile and diesel engine fuels.

The growing availability of CBD — the non-psychoactive, mostly therapeutic cannabidiol found in hemp — is now casting a spotlight on the crop that extends far beyond its traditional uses as a fiber and grain. Hemp Consulting Group in Colorado estimates a global CBD market worth $10.6 billion in 2025. Projections like these have led many to see the hemp market as the next gold rush.

According to a report released earlier this month by Hemp Industry Daily, 10 states currently dominate when it comes to hemp production. The report, Cultivation Snapshot: U.S. Wholesale Hemp Prices and Supply, shows that Colorado, Kentucky, Oregon, Montana and Tennessee lead in hemp production based on licensed acres. 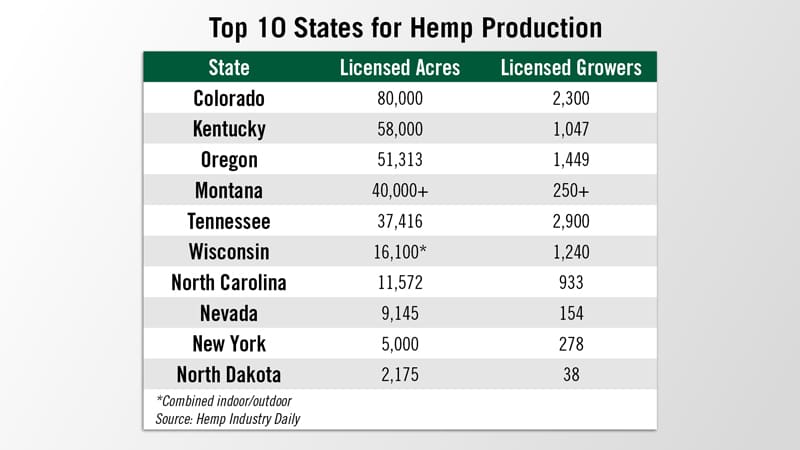 As reported earlier in Ag Equipment Intelligence, despite optimism about CBD, hemp’s immediate uses as a rotational crop are less attractive. Bryan Parr of Legacy Hemp warned those eager for a chance to hedge against a volatile market to be cautious. He says he agree with the potential, but adds that we’re getting caught up in the large numbers and he’s not certain about the timeframe. Farmers are hearing that markets are growing about 10-20 fold every year, but he says to remember, we’re starting from basically nothing.

Ag Equipment Intelligence editors are in the process of producing a new special report examining the possibilities and potential that hemp holds for farm equipment dealers and manufacturers. The report is scheduled for release in August 2019.

This week’s dealer on the move is Farm-Rite Equipment. The shortline-only dealer is opening a new store in Long Prairie, Minn. The dealership has three other stores in Dassel, Willmar and St. Cloud.

Finding the Next Start-Up ‘Unicorn’

Even in a challenging ag economy, dealerships are looking for opportunities which can strengthen the business for the future.

Acquisitions and consolidation have long been a part of the farm equipment industry. But collaborations and partnerships, especially on the precision farming side, could be key in further developing this side of the business for dealers.

Jim Henderson, executive partner with The Exemplary Group, a business consulting firm, says the ag start-ups, particularly on the software side, could offer some lucrative opportunities for dealers.

I had a chance to catch up with Henderson last week in Illinois during a dealer peer group meeting, to get insight on why getting in on the ground floor with ag tech start-ups could evolve dealers’ precision business.

“The challenge for a dealers is that there's both opportunity and risks. The risk is that a lot of these products have not figured out a market fit. And that's the biggest risk with a startup. If you're out there and the product market fit is not proven, then you risk wasting a lot of time and money. If there's enough of a track record, it's proven enough that you can hop in. You want to be early, but not too early, assuming you're just selling it. And the second part is, a lot of these ag companies, you've got to figure out how, have they thought through their channel program? Do they really want to work with dealers, or are they just trying to take your customers and then use them themselves? An eye towards that would be important and I think in many ways that’s something I would look at precision farming has been able to, in effect, you can help grade people's channel programs. How strong are they and are they really viable or not?"

Henderson adds that dealers should not undervalue their relationships with customers and their ability to leverage new technology to fill a specific market need.

Earlier this month, the Assn. of Equipment Manufacturers released its North America tractor and combine sales for June, completing a picture of how the first 6 months of 2019 compared to previous years. Overall, the first half of 2019 has shown increases over the first half of 2018 in all categories except 40-100 horsepower tractors, which remain down just 1.4%. Over 100 horsepower tractors remained up 2% year-to-date, in addition to 4WD tractors being up 15% year-to-date.

June was the weakest month of 2019 so far, with all U.S. tractor and combine sales categories declining below June 2018 numbers but remaining above the 5 year average. 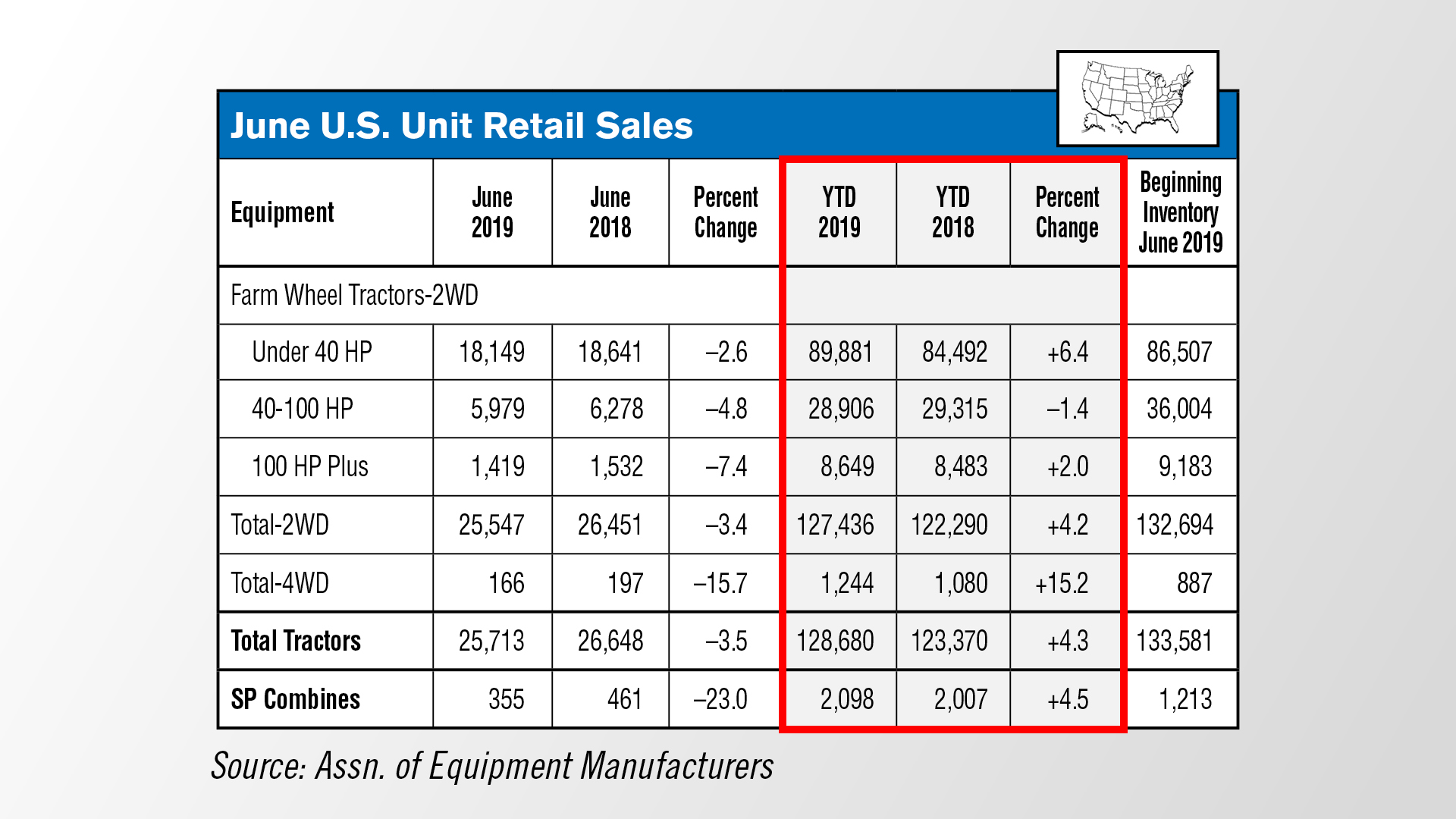 We spoke with Curt Blades, senior vice president of agricultural services at AEM, on the deciding factors behind the rises and falls seen so far in 2019.

Blades began by saying that 2019 had a strong start, particularly in the categories of under 40 horsepower tractors, 4WD tractors and combine sales. Blades says despite weak sales in June, the early strength of the year has kept the total sales for 2019 positive year-to-date. Blades also notes the decline in June was likely due to chaotic weather patterns in the Midwest forcing a late planting season, coupled with international trade dispute.

These issues may have impacted farmer sentiment, which is closely tied to high horsepower tractor sales and might explain their sharp decline in June 2019, says Blades.

Canadian tractor and combine sales continued to decline, with June 2019 numbers landing well below those of June 2018 and even below the 5 year average. 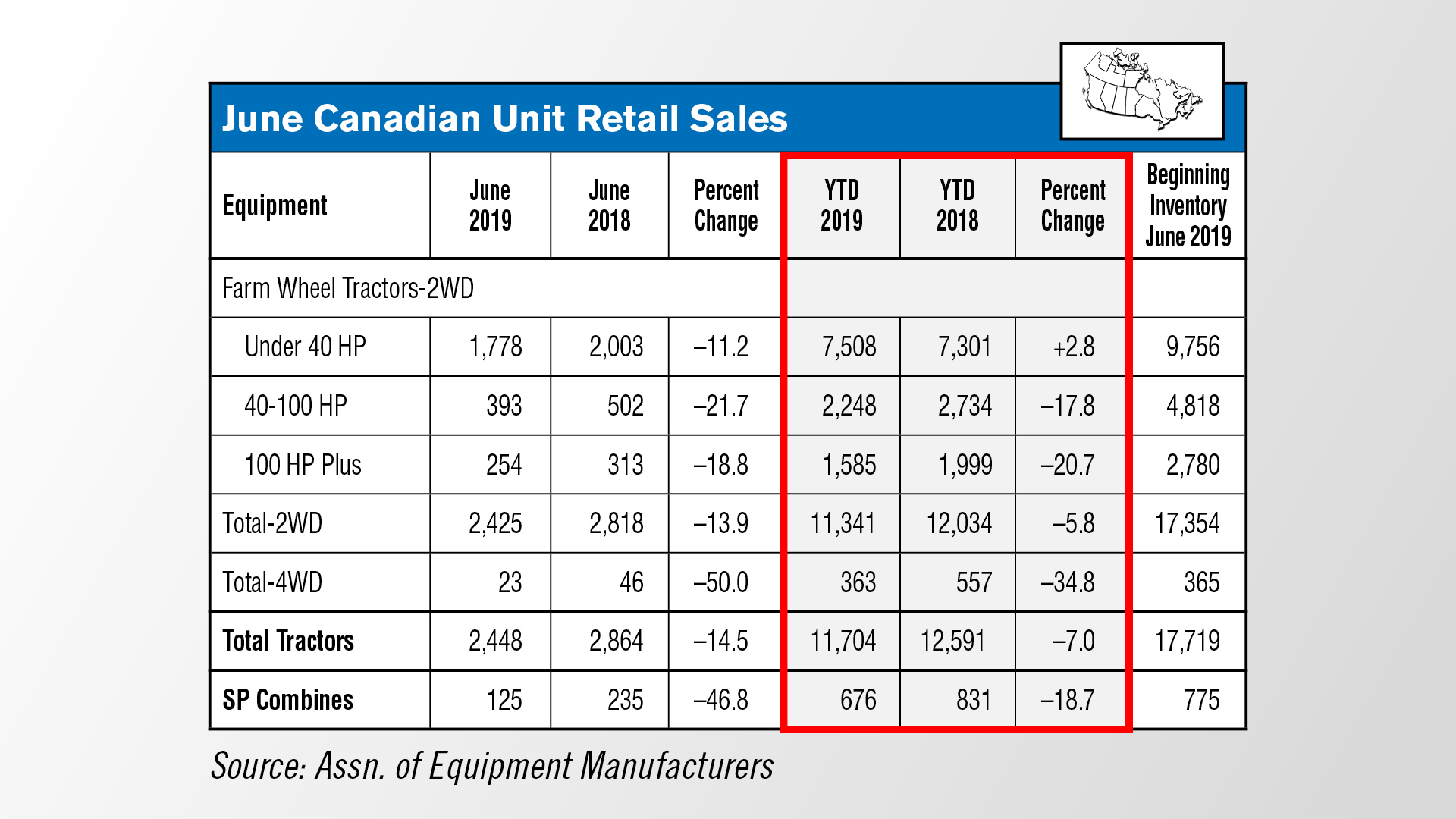 Blades says weather issues impacting the U.S. equipment market have also been a factor on the Canadian market as well, in addition to the exchange rate.

When asked what the second half of 2019 might hold, Blades mentioned high levels of uncertainty due to weather patterns and a need to establish good trade relations with China.

“We’ve got to get trade worked out with China. Because that’s such a gosh-darn [eliminate “gosh-darn” if possible] important market for soybeans. Corn and soybeans complement each other quite nicely, but those two crops also represent a whole lot of equipment volume, certainly those combines and those high-end, high horsepower tractors. What I can say that our members have told us, to a member [eliminate “to a member” if possible]: it’s been really difficult for them to predict what production schedules to put forward for the second half of 2019 and into 2020. If you ask, what does the second half hold, I think it’s a whole lot of uncertainty.” 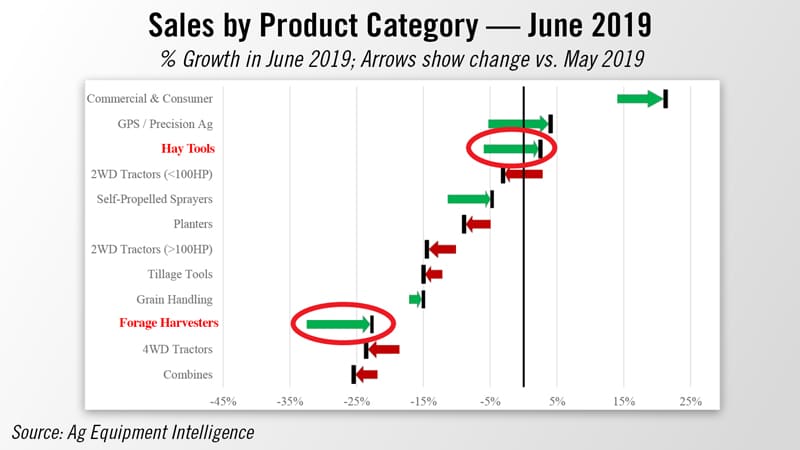 The latest Dealer Sentiments report from Ag Equipment Intelligence indicates dealers saw an improvement in hay and forage equipment both in June and the second quarter. Forage harvesters saw the most notable improvement in June compared to May. And, hay tools were called out by dealers as being particularly strong.

One dealer from the Lake States/Northern Plains region said their dealership saw more activity in hay equipment than in recent years and said it was likely due to flooded areas and less row-crop activity.

We were at the Farm Technology Days Show in Jefferson, Wis., this week and spoke with some hay tool manufactures to get their take on how business has been. Manufacturers confirmed what dealers said, that the wet spring is having a positive effect on hay tool sales.

Craig Harthoorn, president of H&S Mfg., says sales have picked up on rakes, line wrappers and bale processors. He adds there’s been a premium lately on hay and forage crops and believes the weather is having a positive effect on the price.

At AGCO, Arnold Adams says hay tool sales have been on the rise and the company sold more square balers in July than they have in the last 2 years.

The volume of non-real estate farm lending grew at a moderate pace due to new loans in excess of $1 million, according to the Kansas City Federal Bank’s Ag Finance Databook report in July. 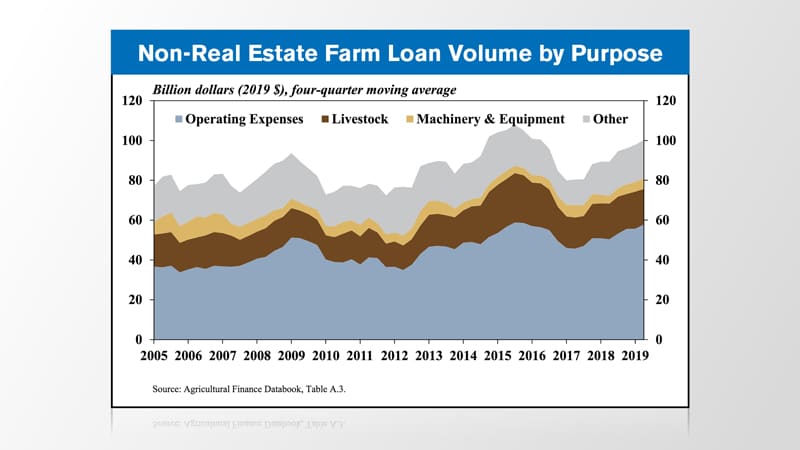 Loans for machinery and equipment so far in 2019 were essentially flat compared to the average of 2015 to 2018. 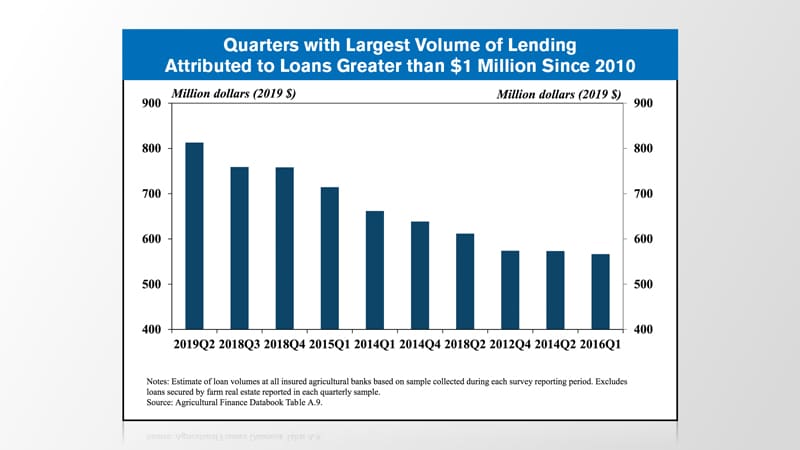 The most notable trend from the second quarter report was the volume of non-real estate farm loans exceeding $1 million, which was higher than previous years and contributed significantly to the average size of loans. According to survey data, the volume of new non-real estate loans at commercial banks totaled more than $800 million in the second quarter. Large loans also contributed significantly to increased agricultural lending activity at commercial banks in the second half of 2018.

The share of nonperforming agricultural loans has continued to trend upward. Bankers also reported additional declines in farm loan repayment rates, a potential leading indicator of past-due loans. However, the overall increase in financial stress in agricultural lending has remained relatively modest and stability in the value of farm real estate has remained an ongoing source of support.

According to the book “The John Deere Century,” by Randy Leffingwell, after Deere’s Annual Meeting on April 30, 1940, Theophilus Brown, who led Deere’s Plow Works experimental department, wrote “Ford competition is beginning to worry us. The hydraulic control particularly. I have to patent applications pretty well advanced with claims allowed which should be a better way of doing what Ford tries to do.” When he visited Waterloo to discs his new power-lift concept, he saw Deere’s new R.X. tractor, one to replace the Model A as soon as July 1941. Brown saw his next assignment, he noted in his diary, “We will want to work on implements to be controlled hydraulically for depth. Need a device so tool will return to same depth when lowered.”