Washington, DC, July 12, 2019 – After two consecutive years of solid growth, equipment and software investment growth is likely to slow in 2019 to 3.9% (down from 4.5% in the 2Q update of the Economic Outlook published in April), according to the 3Q update to the 2019 Equipment Leasing & Finance U.S. Economic Outlook released today by the Equipment Leasing & Finance Foundation. Business conditions for the equipment finance industry softened in the first half of the year as the U.S manufacturing sector weakened, and investment growth in several key verticals is expected to slow or contract in the second half of 2019.

Jeffry D. Elliott, foundation chairman and senior managing director of Huntington Equipment Finance, said, “Consumer confidence has eased this year while consumer spending has moderated. Large businesses are showing signs of pulling back, though small businesses remain upbeat. In light of stronger-than-expected growth in 1Q, the economy is expected to grow 2.5% in 2019, up from the previous estimate of 2.2%.”

The Foundation-Keybridge U.S. Equipment & Software Investment Momentum Monitor, which is included in the report, tracks 12 equipment and software investment verticals. In addition, the “Momentum Monitor Sector Matrix” provides a customized data visualization of current values of each of the 12 verticals based on recent momentum and historical strength. Several equipment verticals should expect their growth outlook to remain steady in the second half of 2019.

The Agricultural Momentum Index fell 2.8% (annualized) in 1Q 2019 but is up 11% from one year ago. The index from increased from 90.0 (revised) in June to 95.5 in July, its highest level since December. Goods improved 0.7% in April, and Soybean Futures improved 2.0% in June. Overall, the Index points to positive growth in agricultural machinery investment over the next three to six months. 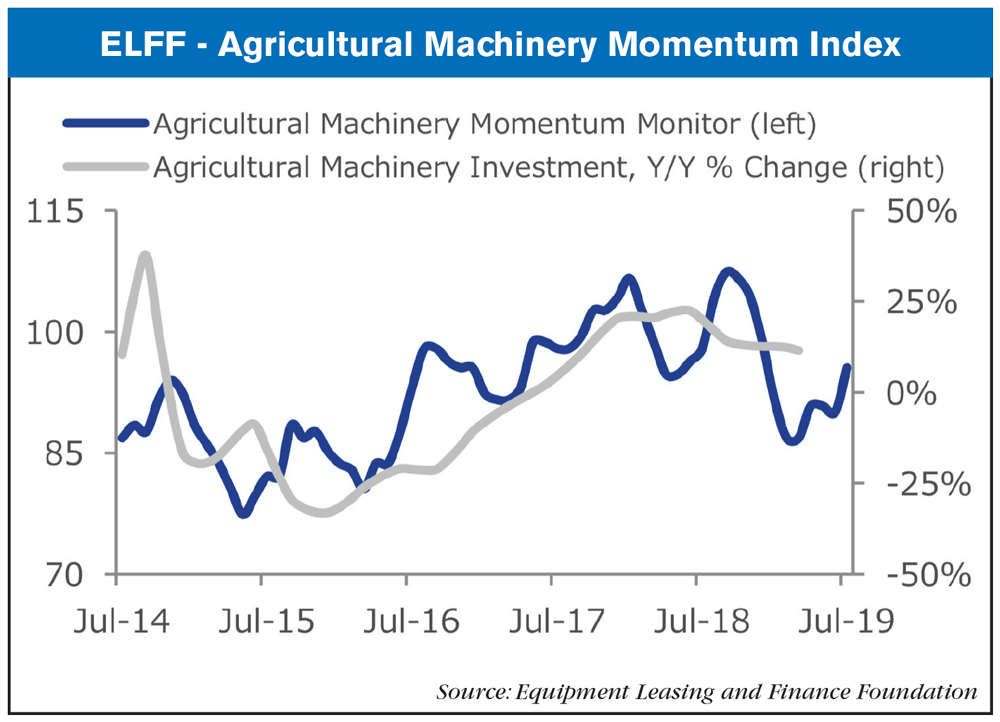 After achieving 2.9% growth in 2018, the U.S. economy expanded at a healthy 3.1% pace in the first quarter, exceeding expectations. However, trade frictions are undoubtedly contributing to the softness in the U.S. manufacturing sector, which continued to struggle in 2Q and does not appear to be on the verge of a rebound.