Soybeans are the largest and most concentrated segment of global agricultural trade and account for 18% of total U.S. crop receipts, second only to corn (25% of crop receipts). As a result, factors that impact soybean sales can ultimately have a profound effect on farm machinery sales, one way or another. 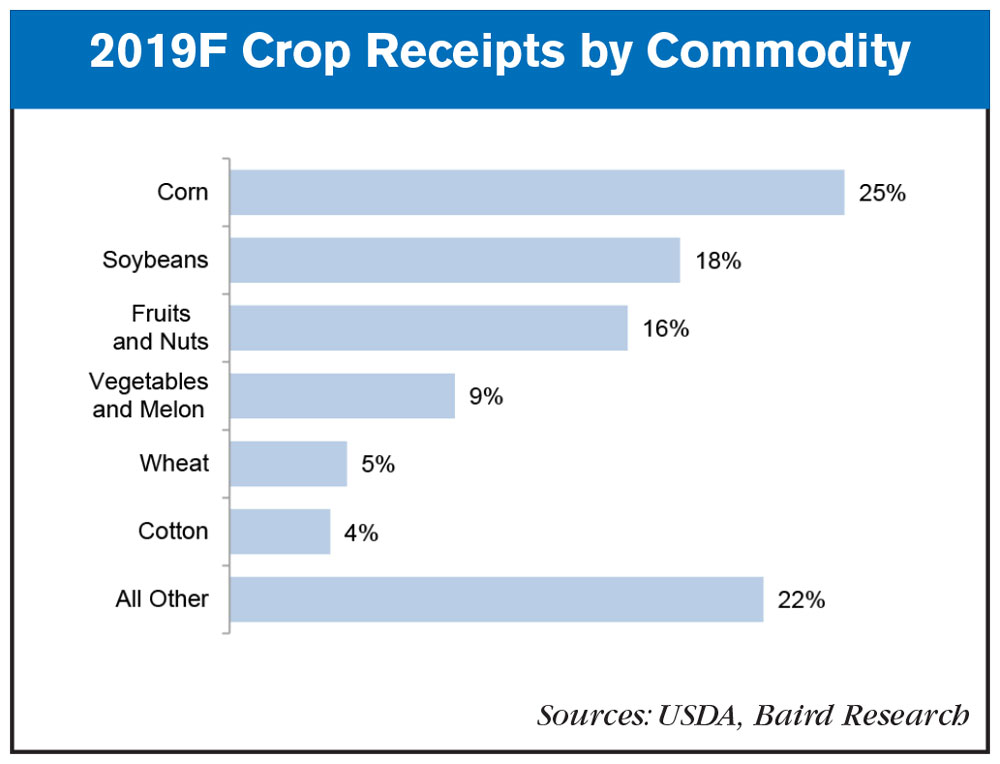 Geographic concentration of soybean importers and exporters is a distinguishing feature of the global soybean market. During 2016-17, the U.S. and Brazil together accounted for 83% of world soybean exports. The U.S. exported 59 mmt of soybeans and Brazil exported 63 mmt, while Argentina was the third leading exporter with 6.9 mmt.

The recent meeting between Presidents Donald Trump and Xi Jinping where they agreed to resume trade talks on the condition that the U.S. would not impose additional tariffs on Chinese imports. Some industry observers see this as a potential boon to the ag equipment industry.

In a July 2 note, Zacks.com said, this is welcome news for the [manufacturers and dealers in the] industry which had been witnessing a downtrend for the past few years due to low commodity prices and sluggish farm incomes which adversely impacted spending on farm equipment. “While tariffs imposed by the Trump administration on steel and aluminum hurt manufacturers by inflating raw material costs, China's retaliation with tariffs on U.S. food and agricultural exports equally hit the industry hard, given that China is the largest export market for U.S. agriculture producers. High tariffs disrupted normal marketing patterns, flaring up costs by forcing producers to find new markets for clearing the surplus stock. Moreover, stringent and cumbersome entry procedures affected the quality and marketability of perishable crops, escalating marketing costs for producers.”

In addition, President Trump had authorized the USDA to provide a $16 billion aid for American farmers who have been affected by the trade war. And USDA plans to spend $1.4 billion to purchase surplus commodities that would be used in food banks, pantries and school meal programs.

Wet and cool weather delayed the planting season in most productive farming regions in the United States, which affected crop supply while demand remains high. This imbalance will support prices, which bodes well for farmers.

According to Zacks.com, the USDA's latest available projections show, following a decline of 16% in 2018, net farm is anticipated to increase 10% year-over-year in 2019. Improving farm income will enable farmers to invest in equipment purchases.

The improving fortune for U.S. agriculture is also showing up in the company share prices. Zacks.com reports the Manufacturing – Farm Equipment industry has collectively gone up 15.1% over the past month, outperforming the S&P 500's gain of 7.2% and Industrial Products Sector's rise of 9.2%.