Farmers across Michigan and Ohio are voicing their concerns for the struggling planting season and petitioning their state legislators to provide relief. According to ABC 6, in Ohio, farmers told Gov. Mike DeWine that the torrential rain will create losses that “will take years to recover.” DeWine, who last week asked the USDA to issue a disaster declaration that would make aid available to Ohio farmers, agreed, saying that “The ripple effect will be huge.”

A substantial number of farmers have been impacted by the rainy season, with some opting out of planting for farm insurance and others planting a late crop against the odds of fall frosts. Mark Drewes, an Ohio Wood County farmer who grows corn that supplies two major dairy operations, said he’s only been able to plant a fraction of what they need and that the window is closing on this year.

“For the first time in my farming career, I’ve felt like my back is against the wall,” he said. “Crop insurance doesn’t put feed into those cows’ mouths.”

Meanwhile in Michigan, state legislators on both sides of the aisle voted to pass House Bill 4234, making $15 million in funds available to lending institutions to cut down farm loan interest rates, which equates to more than $300 million in values to farmers. Over 410 farmers had been in contact with state representatives ahead of the vote. Michigan Farm Bureau (MFB) President Carl Bednarski said, “It’s humbling to see the Legislature understand what’s happening and be willing to step up to the plate for our industry and we are grateful for their support and fast action.” 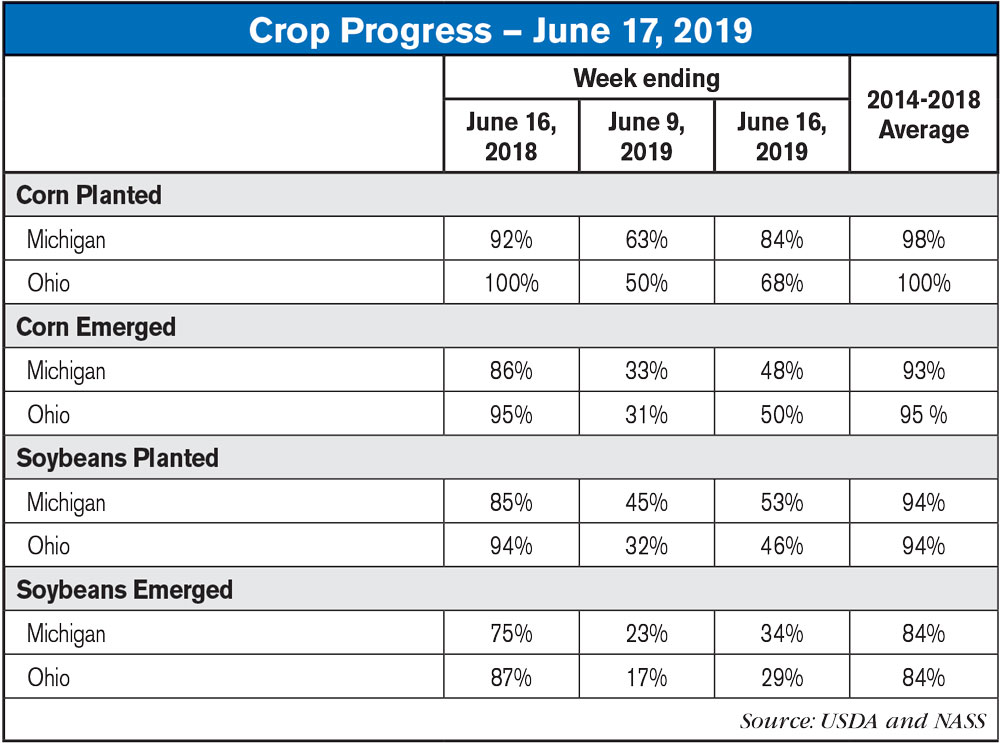 Harsh weather and continuous rains continue to batter these states, where crop planting and emerge rates are record low. USDA’s June 17 Crop Progress report showed that Michigan had only planted 53% of its soybeans; compared to the 85% planted in the same week of 2018, this shows a 38% decline in planting progress. Ohio showed similar percentages, reporting 46% of soybeans planted compared to 94% in the same period in 2018, a 51% decline.