Flooding Isn’t Over Yet; Pushes Up Corn Prices

The ultimate impact of spring floods throughout much of the Midwest and Corn Belt won’t be known until at least harvest time. As a result it’s difficult to assess how it will affect farm equipment sales, but so far, it’s giving a boost to corn prices. One thing known, for sure, is the impact of the flooding is still being felt in many areas.

According to USDA’s June 13 Water and Climate Update, the Arkansas, Missouri and Mississippi Rivers remain at major flood levels, inundating farmland and cities from continuing rainstorms and snowmelt. Some areas of the Midwest are reporting improvement, whereas others continue to evacuate ahead of new flooding. The Army Corps of Engineers remains concerned about weakening levees and the monitoring of dams and levees to mitigate flooding remains at emergency levels in many areas.

Rain totals this year in the Missouri River Basin are the second highest in 120 years. Many fields that are still flooded will be unplantable this year and continued flooding will hamper recovery and repairs to farms, cities and infrastructure. 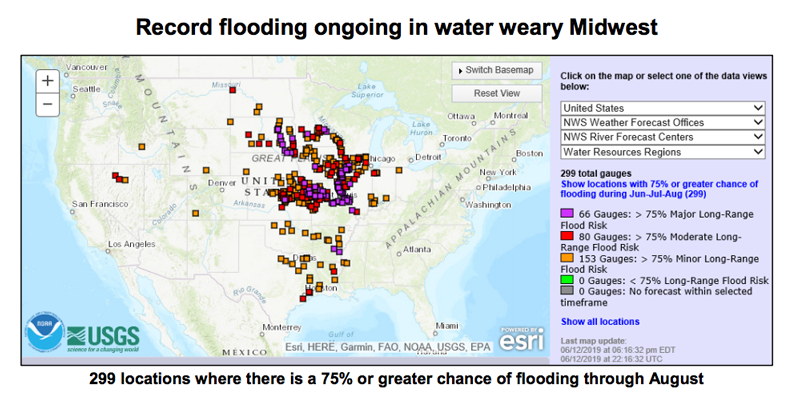 WASDE Positive for Corn, No Change for Soybeans

The June 11 World Agricultural Supply and Demand Estimates from USDA significantly cut corn production, but forecast little if any change for soybeans.

According to the WASDE report, 2019-20 U.S. corn outlook is for increased beginning stocks and imports, sharply lower production, reduced feed and residual use and exports, and smaller ending stocks. Corn production for 2019-20 is forecast to decline 1.4 billion bushels to 13.7 billion, which if realized would be the lowest since 2015-16.

USDA economists said, “Unprecedented planting delays observed through early June are expected to prevent some plantings and reduce yield prospects. USDA will release its Acreage report on June 28, which will provide survey-based indications of planted and harvested area. With sharply lower supplies, use is projected to decline 425 million bushels to 14.3 billion, based on reductions to feed and residual use and exports. With supplies falling more than use, ending stocks are projected to decline 810 million bushels to 1.7 billion, which if realized would be the lowest since 2013-14. The season-average farm price is raised 50 cents to $3.80 per bushel.”

For soybeans, the June WASDE said, although adverse weather has significantly slowed soybean planting progress this year, area and production forecasts are unchanged with several weeks remaining in the planting season. With soybean use unchanged, 2019-20 ending stocks are projected at 1,045 million bushels, down 25 million from the revised 2018-19 projection.

The 2019-20 season-average price for soybeans is forecast at $8.25 per bushel, up 15 cents reflecting the impact of higher corn prices. USDA estimates the average soybean yield at 49.5 bushels per acre, no change from the May estimates.

Bumpy Farm Equipment Sales in May

U.S. retail sales of farm machinery were both up and down in May, depending upon tractor category, while Canadian farm equipment dealers are confronting ongoing declines.

Likewise, total 4WD tractor sales increased by 1.6% compared to May of 2018 and 6.3% for year-to-date sales from 2018. Overall, total farm tractor sales experienced a minimal 1.6% growth which was essentially overshadowed by the 13% drop in sales for self-propelled combines.

While U.S. numbers may have seen slight increases, Canada saw major decreases. Sales of under 40 horsepower and 100-plus horsepower 2WD tractors were the only categories that experienced growth for Canada. The rest of the categories declined in sales with some seeing drop offs of as much as 20.8% for 40-100 horsepower tractors and 56.4% for total 4WD tractors.

“While numbers were up for the U.S. in May, the ongoing trade war has us concerned about the direction they may take in coming months,” said Curt Blades, AEM senior vice president, ag services. “Free trade is critical to keeping the U.S. economy and our industry strong. Especially when you consider 30% of the equipment manufactured in the U.S. each year is earmarked for export.”

Farmers Pick Up the Planting Pace; Much Yet to Be Done

Home Stretch for 2019 Corn & Soybeans Not Yet in Sight