The most recent Beige Book (May 2019) released by Federal Reserve System included conditions impacting agriculture throughout the country. Overall, it found that agricultural conditions “remained weak” although “a few Districts reported some improvements.” 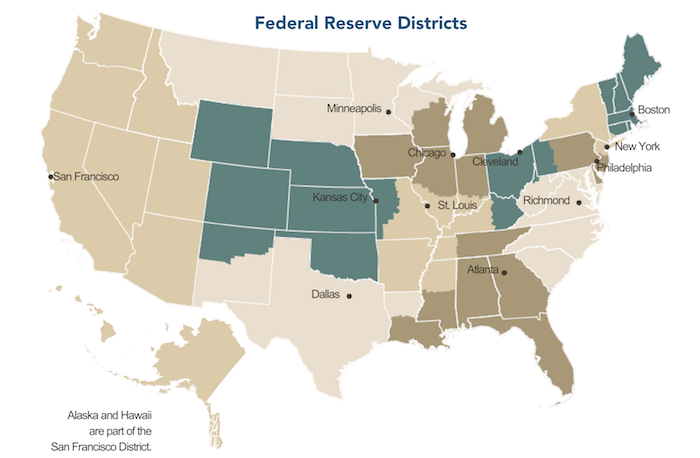 Report from the 12 districts included regional commentary on agriculture within their areas of responsibility. Following are their comments.

Agricultural conditions across the District were mixed. Recent reports indicated much of the District was drought-free although parts of Alabama, Georgia, and the Florida panhandle experienced abnormally dry to moderate drought conditions. Conversely, recent heavy rains interfered with fieldwork in Louisiana and Mississippi where both soybean and rice planting were behind the five-year averages. Alabama, Georgia, and Tennessee were ahead of the five-year average in cotton planting, while Alabama, Florida, and Georgia were ahead of their five-year planting averages in peanuts. Several contacts reported that the combination of low commodity prices and some rising input costs were resulting in compressed margins. The May Florida orange forecast was down from the prior month’s forecast, but continued to be higher than last season’s production. On a year-overyear basis, prices paid to farmers in March were up for corn, cotton, and beef but down for rice, soybeans, broilers, and eggs.

Wet weather and low prices continued to be challenges for farmers in April and early May. There were reports of planting delays throughout the District because fields were too wet. Contacts indicated that it would soon be too late to plant corn in some areas and that switching to soybeans, while possible, would be costly due to wasted fertilizer and the low price of soybeans. Contacts also noted that the poor field conditions were adding to some farmers’ financial distress. In other market segments, hog and dairy prices were up, while cattle prices were down. Hay prices moved higher as the slow development of pastures this spring meant livestock required supplemental feeding. Contacts believed that the removal of Mexican and Canadian tariffs on US livestock would boost exports.

Agriculture conditions declined moderately from our previous report and have significantly worsened relative to the same time last year. The number of acres planted experienced significant declines compared with previous years, which contacts have attributed to significant flooding along the Mississippi River. As of mid-May, the percentages of planned acreage planted for corn and soybeans were around 50% lower than this time last year and about 30% lower for rice and cotton. Contacts have continued to report concerns over depressed crop prices and the effects of renewed trade tensions with China.

Natural resource extraction conditions have improved modestly since our previous report. Seasonally adjusted coal production increased 15% from March to April. However, April production was down 18% from a year ago.

District agricultural conditions weakened heading into the growing season. Heavy spring rains significantly delayed crop planting across the District, with contacts expressing concerns that some farmers might not be able to get a crop in the ground at all this year. Respondents to the Minneapolis Fed’s first-quarter (April) survey of agricultural credit conditions indicated that farm income and capital spending decreased relative to a year earlier, with further declines expected for the coming three months.

Wet weather over the reporting period allowed moisture conditions to remain adequate or even in surplus across most of the district. While causing late plantings in some areas, overall, the rain impact was positive as it boosted growing conditions. The wheat crop was in great shape, though prices remained weak. Pasture conditions remained favorable for livestock grazing. Contacts expect a big cotton crop this year, but prices have moved lower than the cost of production for many producers. Trade discussions have put a strain on agricultural markets in general, and raised concern from agricultural industry leaders.

Several agricultural producers in southern New Mexico expressed concern over the lack of labor force growth and the strain that immigration restrictions have imposed on their current workforce. They also mentioned that the recent authorization of hemp production provides an opportunity as an alternative to pecan production, as the pecan industry has been negatively impacted by tariffs.