The latest episode of On the Record is now available! In this week’s episode we discuss a double-digit drop in dealer sentiment, Deere’s plans to cut production by as much as 20% at some plants, results from the 2019 Dealer-Manufacturer Relations survey and Titan Machinery’s latest earnings report. In the Technology Corner, Jack Zemlicka shares preliminary results of the 7th annual Precision Farming Dealer benchmark study. 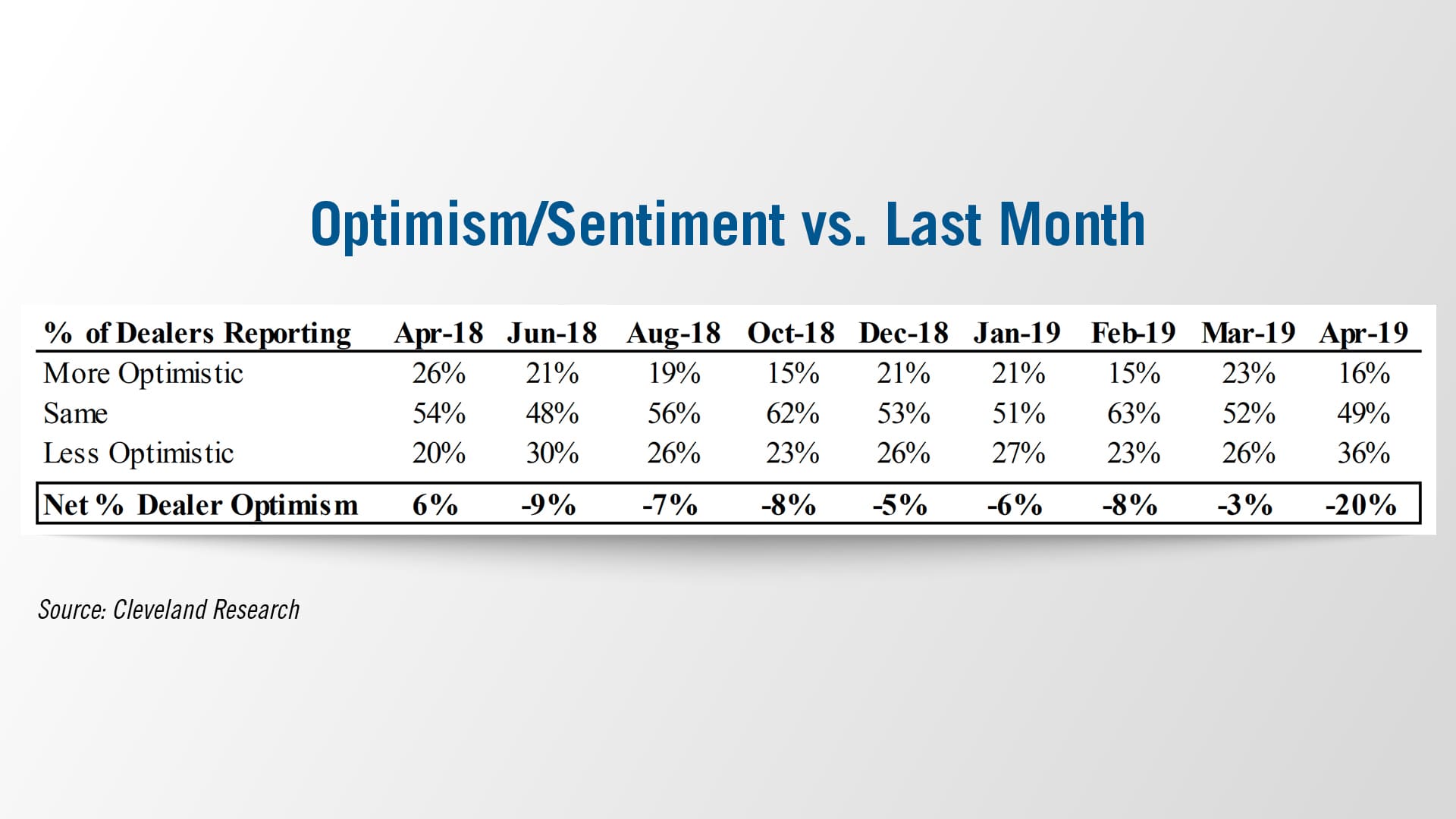 The Dealer Optimism Index, which measures sentiment among dealers compared to the prior month, saw a double digit drop in April to a net 20% of dealers reporting being less optimistic from a net 3% who were less optimistic in March. This is the lowest optimism reading of 2019 to date.

Optimism for the first quarter of the year was about –6% on average. And, a year ago the April index was at a net 6% of dealers reported being more optimistic compared to the month prior.

One dealer in the Appalachia/Northeast region commented, “We thought April would be better, but wet weather on top of weak farmer income is killing us.”

Another dealer in that same area said, “Cold, damp weather has slowed down field work and spot flooding has caused major issues.”

This week’s Dealer on the Move is True North Equipment.

Talking with precision dealers about their revenue outlook during the last several months, most have shared variations of the same story — cautious optimism with a caveat.

A challenging spring in many areas is compounding the prolonged effect of the slumping ag economy, a combination precision dealers cited as a concern. 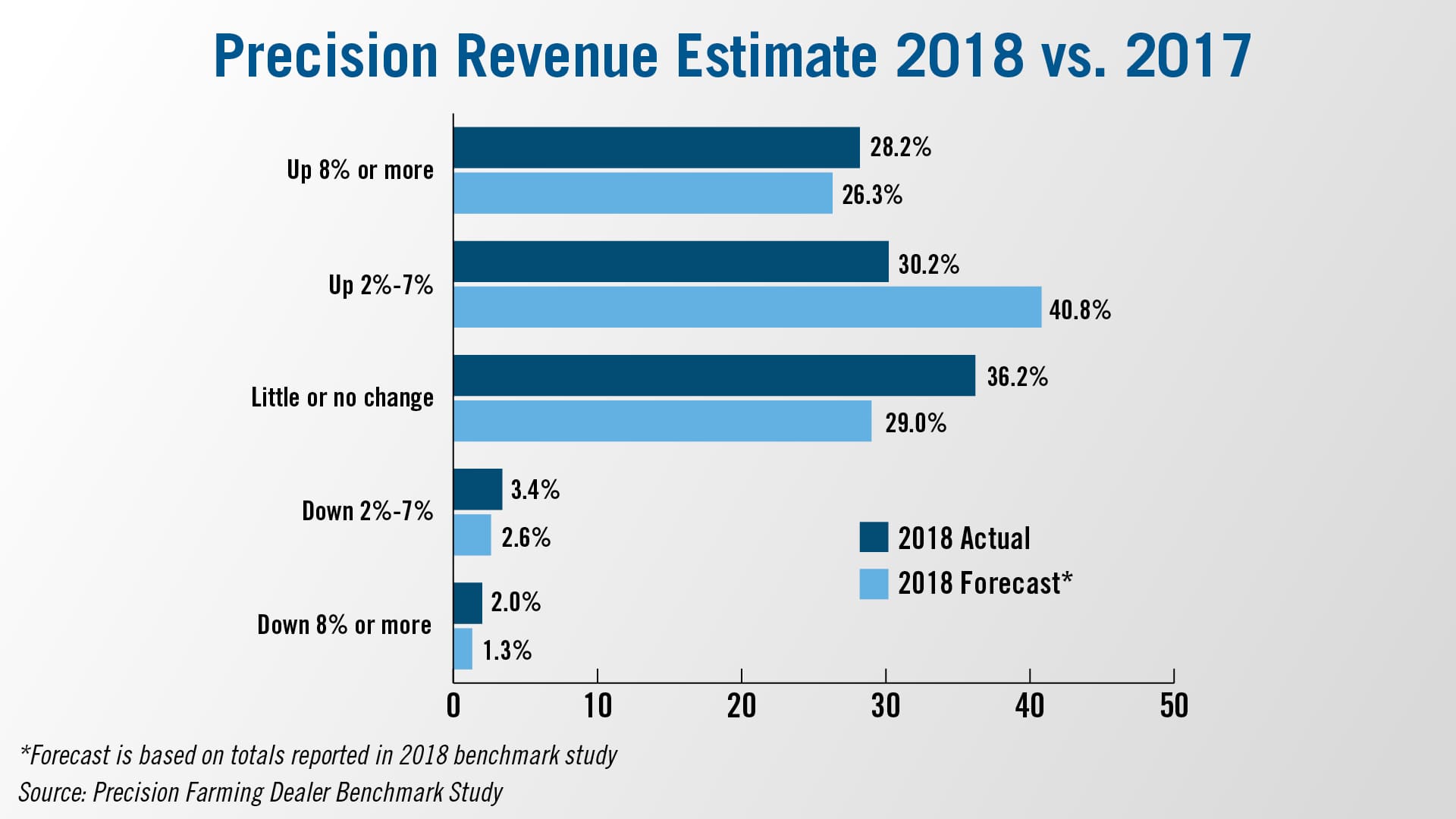 Based on the responses gathered during the first and second quarter of 2019 from 31 different states and Canada, about 28% of dealers reported precision revenue growth of 8% or more in 2018, slightly ahead of the revenue forecast in last year’s report.

This marks the third consecutive year dealers exceeded their higher-end revenue expectations. However, 2018 revenue in the 2-7% range was about 10% off of initial projections, with almost one-third of study participants reporting modest precision revenue growth last year. 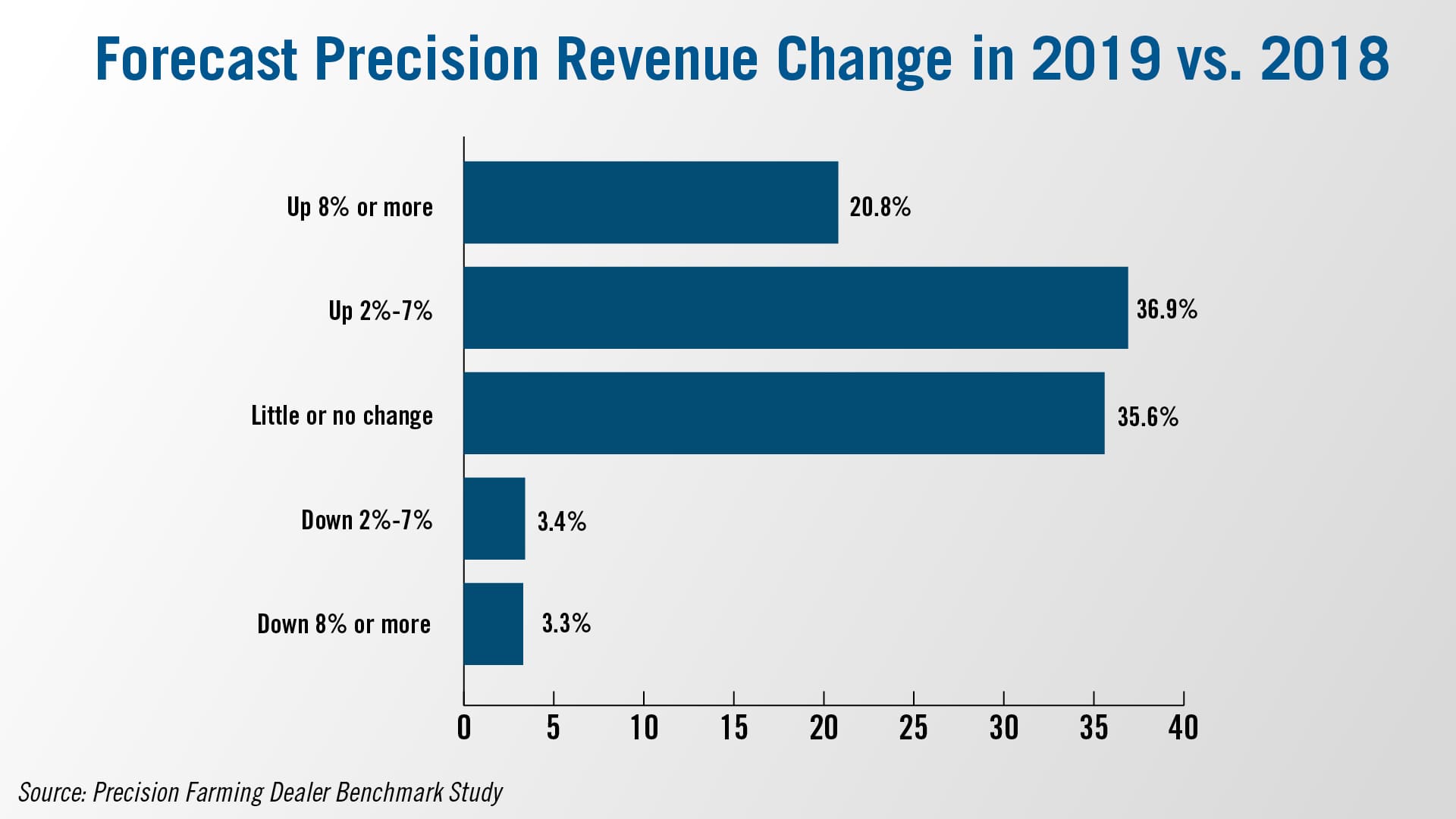 You can find the complete 2019 benchmark study report and analysis coming in the Summer issue of Precision Farming Dealer and extended coverage of past studies at PrecisionFarmingDealer.com.

Following decent second quarter ag equipment sales numbers, Deere & Co. has said it plans to slow production of big ag equipment by as much as 20%.

During the conference call with analysts following release of its earnings report, Josh Jepsen, Deere’s director of Investment Relations, said Deere will see lower production shipments in the second half of the year. At some of the larger facilities, on a unit basis, production will be down in the range of 20% compared to the second half of 2018. He added that output reductions will mainly focus on large equipment in the North American market.

Cory Reed, Deere’s president of Ag and Turf for the Americas, added, the manufacturer is taking down production in an effort to calibrate field inventory and where the company wants to end the year to position itself for 2020.

During the call, Reed also addressed some of the reasons, relating mostly to current ag fundamentals for the slowing of ag equipment production, which have several causes, including inclement weather during the planting season and trade issues, which have added more uncertainty to 2019 commodity prices and overall crop receipts.

He said, “Despite high production levels forecasted for the 2019 and 2020 season, corn's global stock-to-use ratio is expected to decline in response to record consumption outpacing supply. Conversely, weak stock to use ratio is projected to increase in 2019 and 2020 due to a sharp production recovery from last year’s drought stricken regions, such as Europe and Australia.

“Meanwhile, soybean stock-to-use ratio was forecasted to remain at elevated levels through 2019 and 2020 marketing year in response to higher than expected yields in the U.S. and the ongoing trade dispute between the U.S. and China. The inventory increase is further compounded by uncertainty for near term global demand as the African Swine Fever has significantly diminished the herd size in China,” Reed said.

Titan Machinery, CNH Industrial’s largest distributor of farm machinery, reported both top and bottom line revenue increases during the first quarter of its fiscal year 2020 ended April 30, 2019. Overall, Titan’s revenues were up 14.2% for the first quarter. 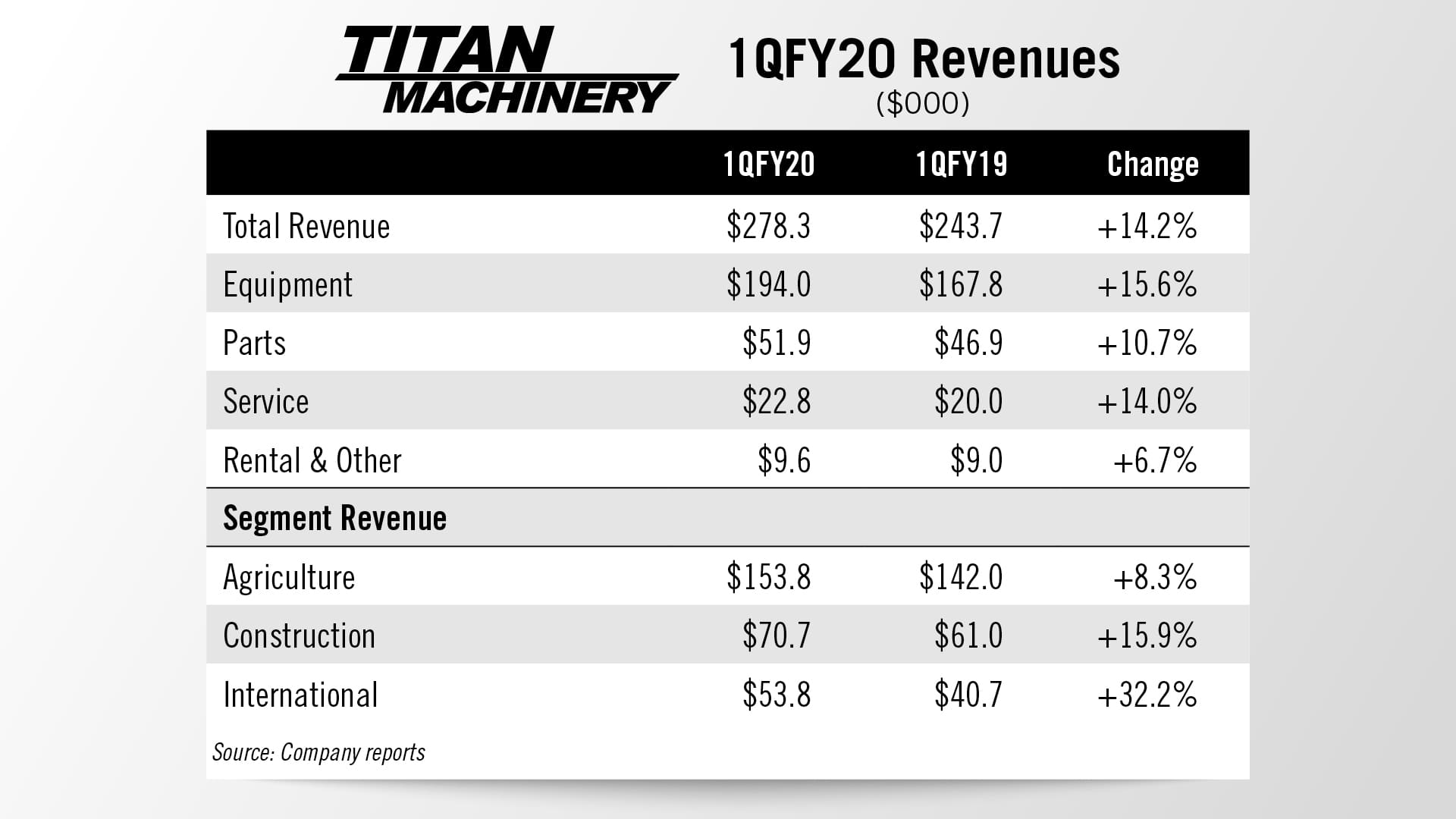 Total revenues for the quarter were $278.3 million compared to $243.7 million for the same period last year.

Equipment revenues rose 15.6% to $194 million in the first quarter vs. $168 million a year earlier. In addition, part sales were up nearly 11%, service revenues increased 14% and rental and other sales grew by nearly 7%.

Titan Machinery did not change its outlook for agriculture, calling for flat sales for the remainder of the current fiscal year. It expects construction equipment revenue to improve by 5-10% and international sales to increase between 10-15%

The Equipment Dealers Assn. has released the results of its annual Dealer-Manufacturer Relations Survey, including Dealer’s Choice and Gold Level Awards. The survey is divided into 4 categories: full-line, tractor manufacture, shortline manufacturer and outdoor power equipment.

The Dealer’s Choice Award in the shortline category went to Vermeer, its fifth time being honored in seven years. Gold Level Awards in the category were given to Bourgault, Bush Hog, Highline Mfg. and Landoll. 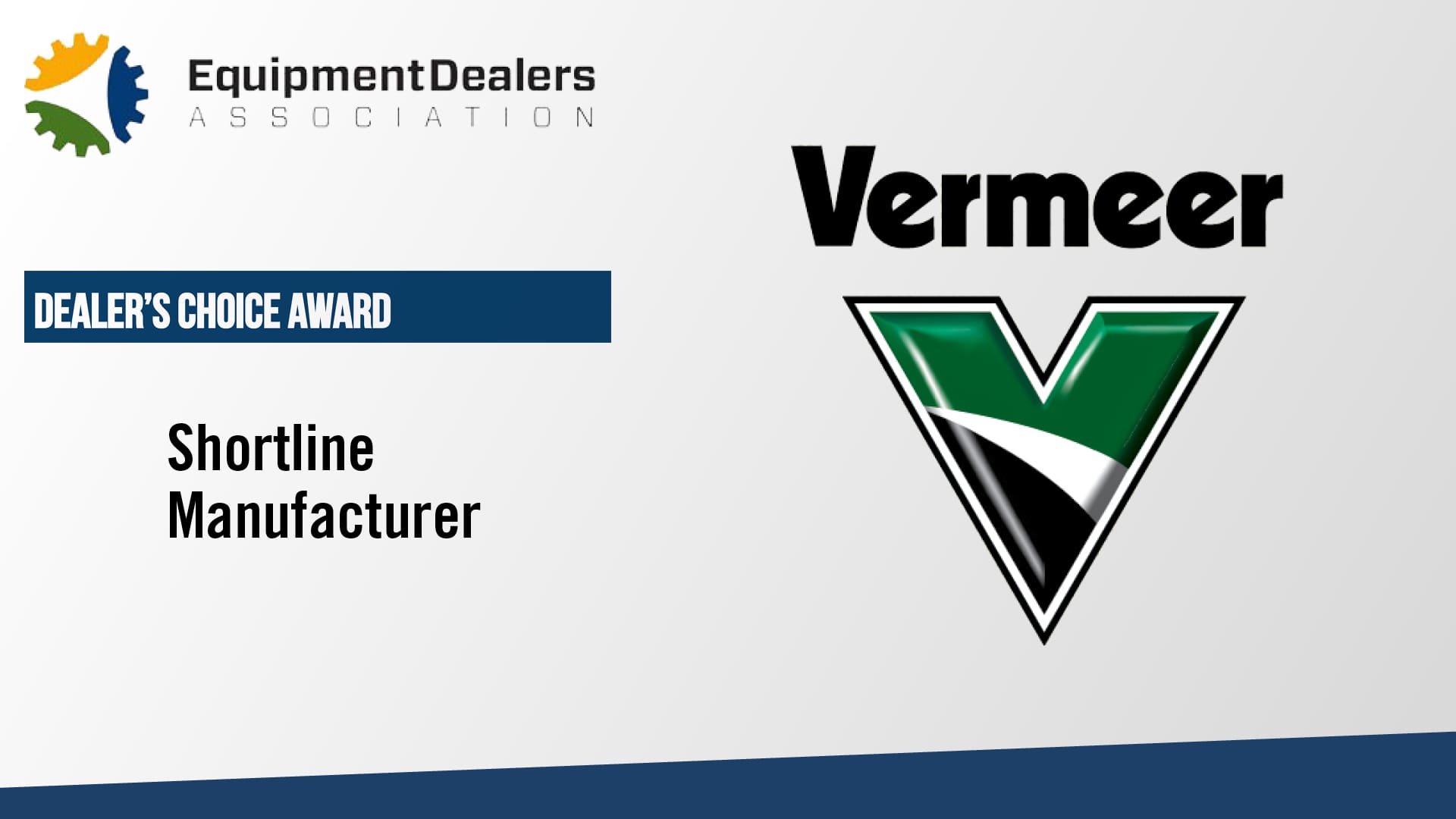 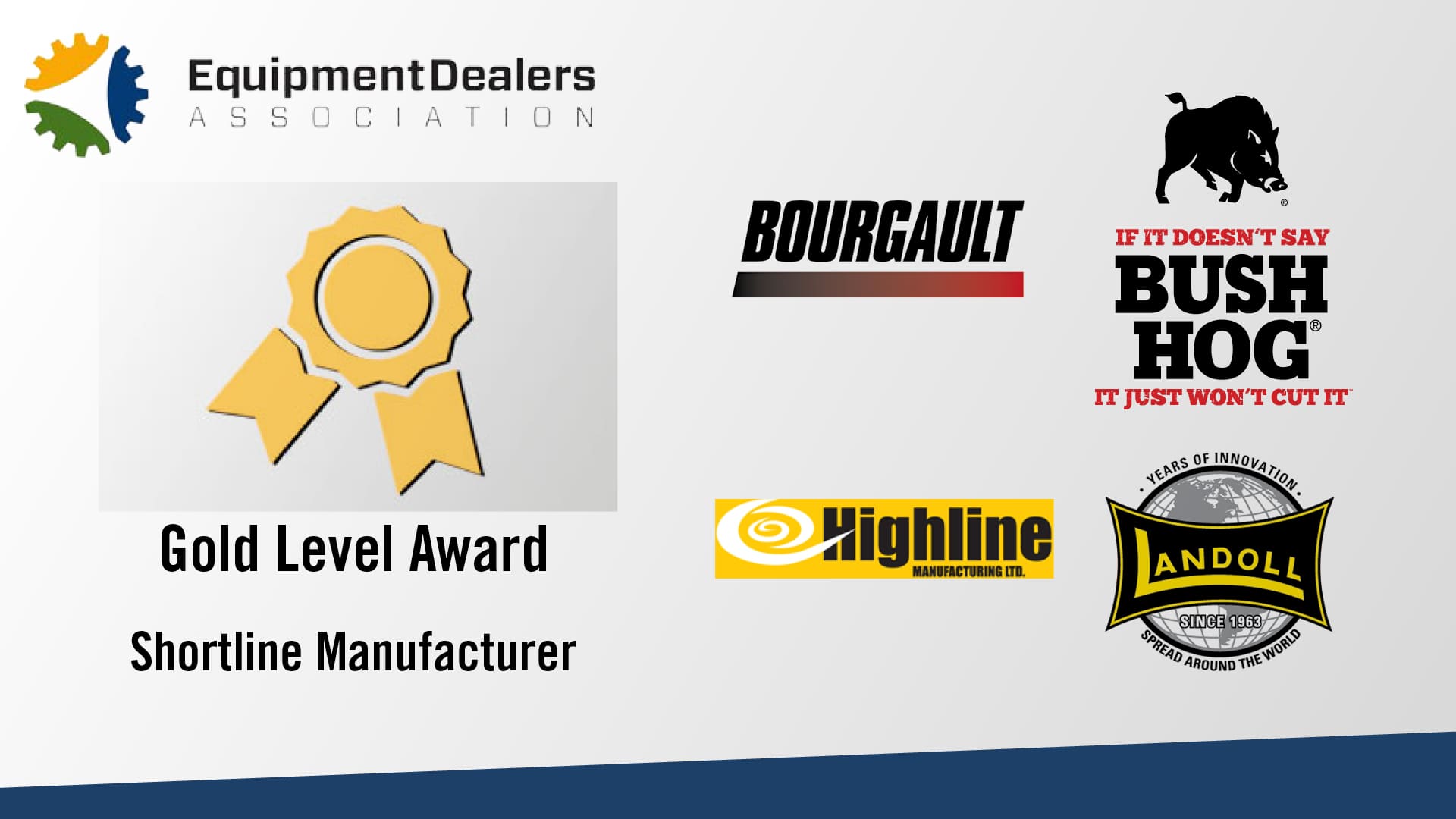 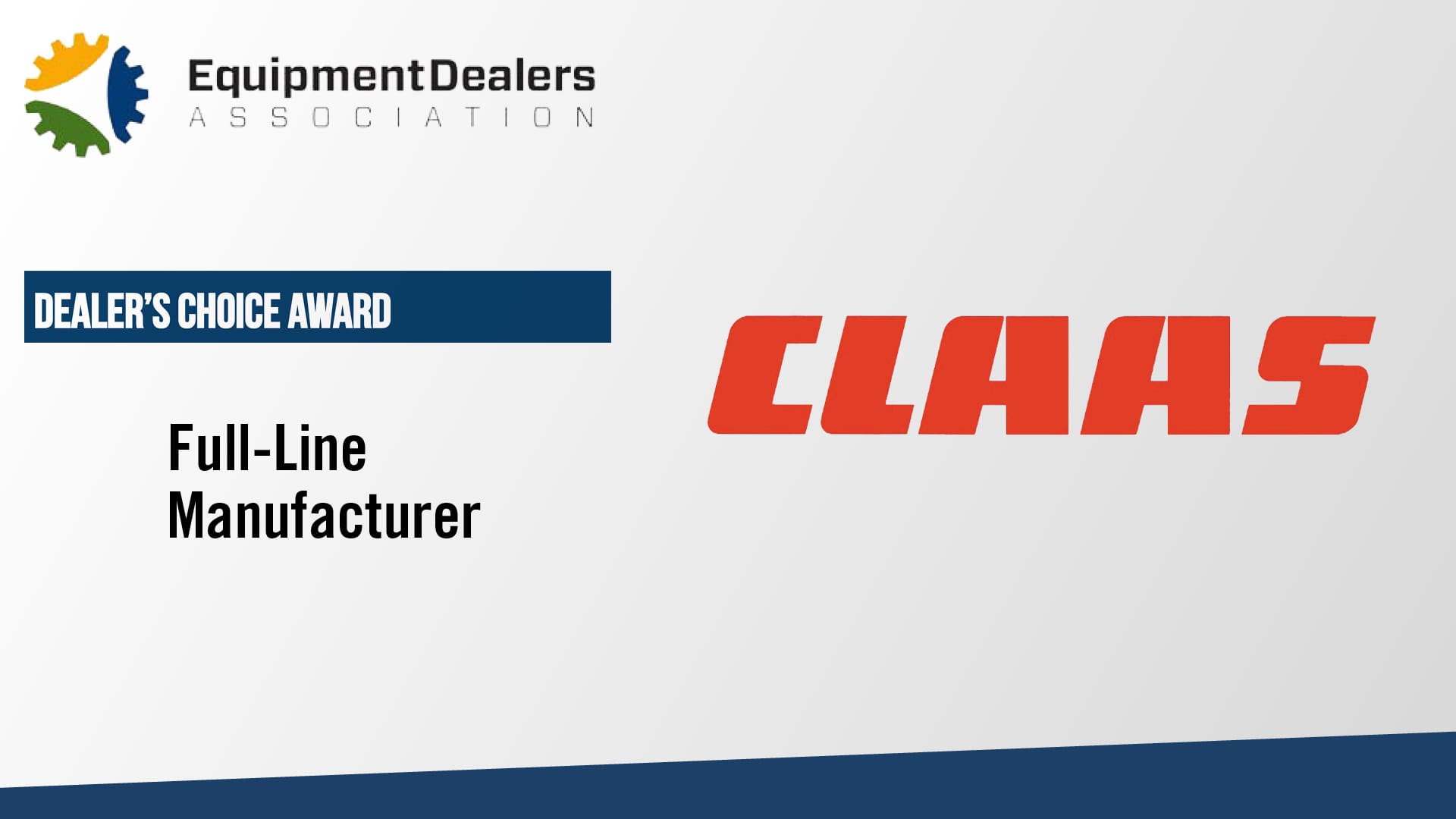 Responding to the challenge, last year EDA officials said Claas was put into the full-line category because it matches the group’s full-line classification of a manufacturer that produces a full complement of equipment, including combines, harvesting machines, tractors and implements.

“Since they manufacture all that equipment, based upon that definition we put them in our full-line category,” Joe Dykes, EDA’s vice president of Industry Relations, said at the time.

We’ll have additional coverage and analysis of the report in the July/August issue of Farm Equipment. 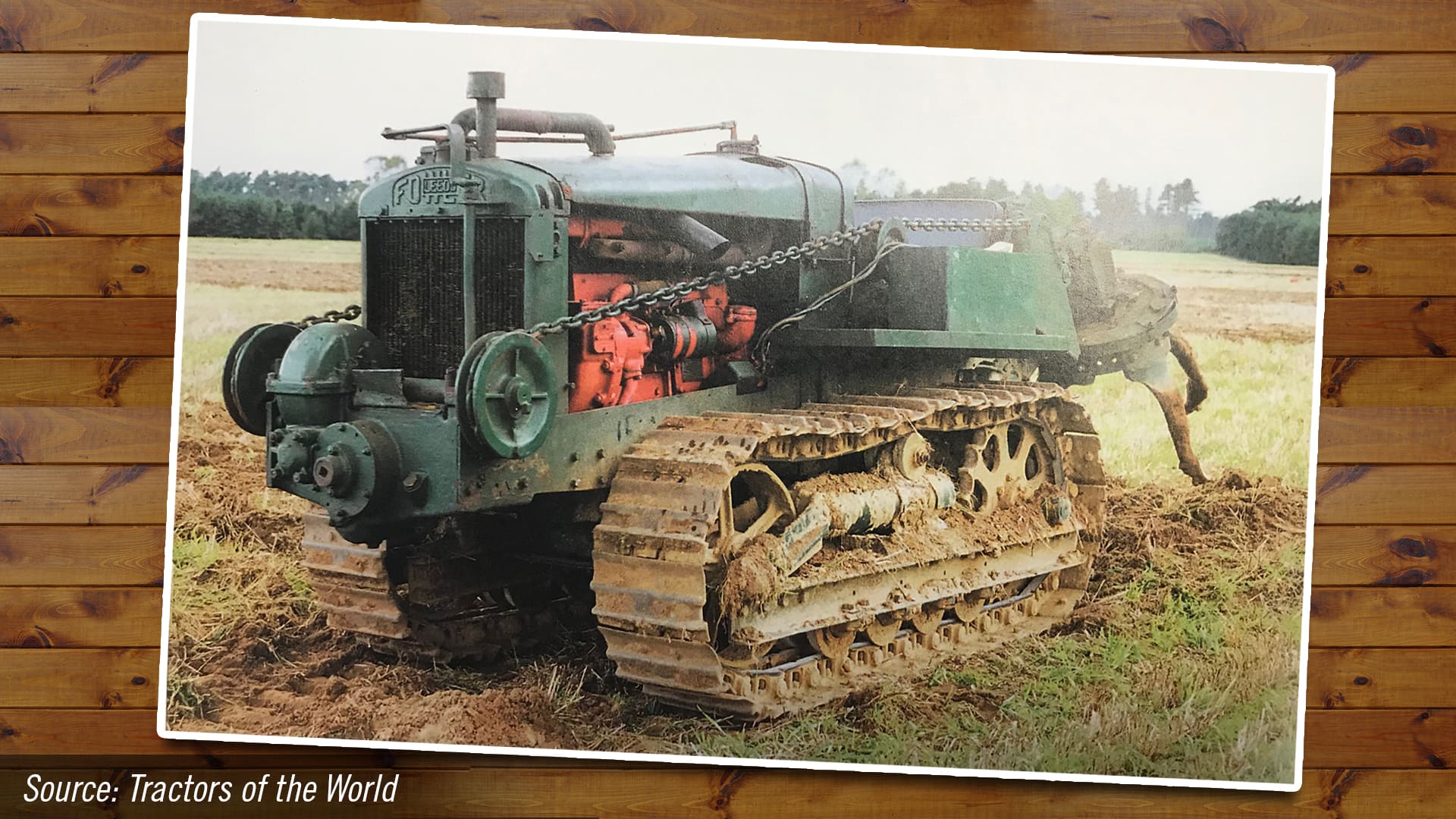 In the days of agricultural steam power, Fowler engines had worldwide success. But, the switch from steam engines to tractor power brought financial troubles to the company. By the mid 1920s the British company desperately needed a new product. In 1924, Fowler signed an agreement for the exclusive rights to manufacture and market the Gyrotiller, which was invented by Norman Stoney, an American who managed a sugar estate in Peurto Rico. Designed to cope with extreme conditions for sugar cane production, the Gyrotiller could be used for other farming systems as well. Early reports were positive and sales to the Caribbean sugar estates expanded quickly. British farmers and contractors also welcomed the Gyrotiller as a form of minimum cultivation. It accounted for nearly 50% of the company’s business, but due to problems with high warranty costs and financial problems for many sugar estates, production ended in 1937.