Under 40 Horsepower Tractors – These smallest tractors continue to follow the U.S. general economic conditions and exceeded our monthly forecast by 6.3%. 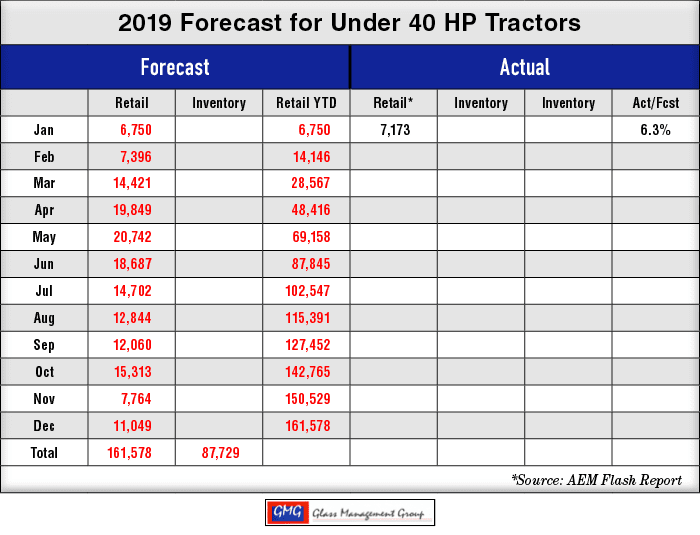 40 to 99 Horsepower Tractors – While the lower third of this category is driven by the U. S. general economy, the rest of this category derived its direction from the agricultural economic conditions and the actual retail number came in slightly under our monthly forecast. 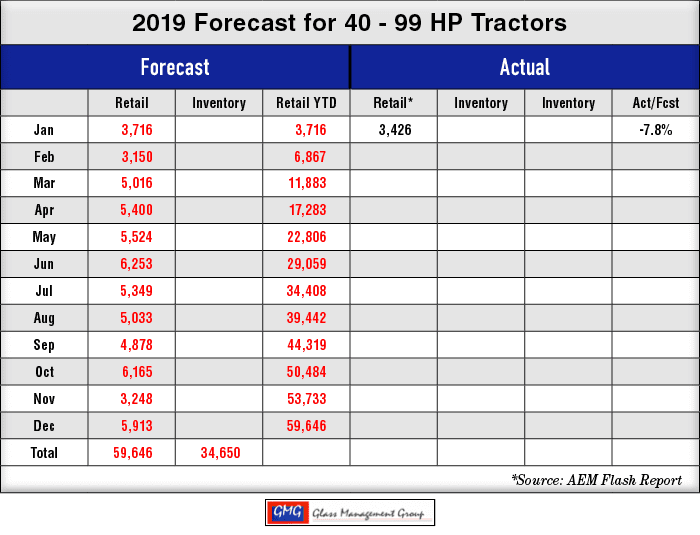 100 + Horsepower Tractors – After a solid 4th quarter sales, this category fell short of our monthly forecast by -21%. 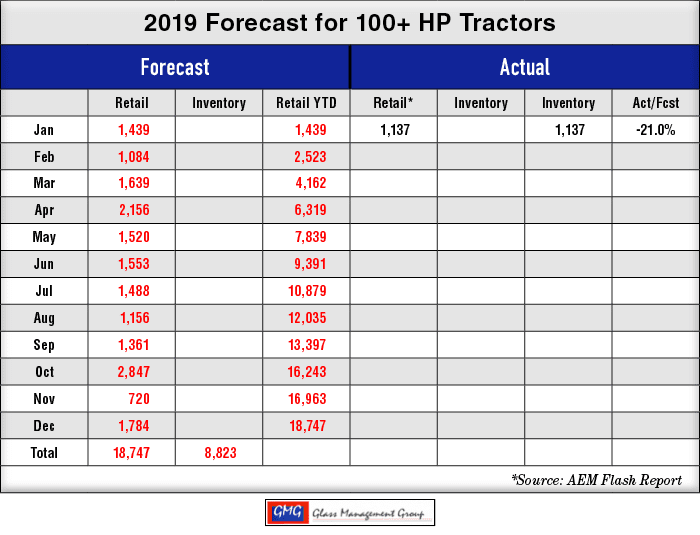 4 WD Tractors – These largest tractors also enjoyed a strong 4th quarter and this category was slightly above our monthly forecast by 3.8%. 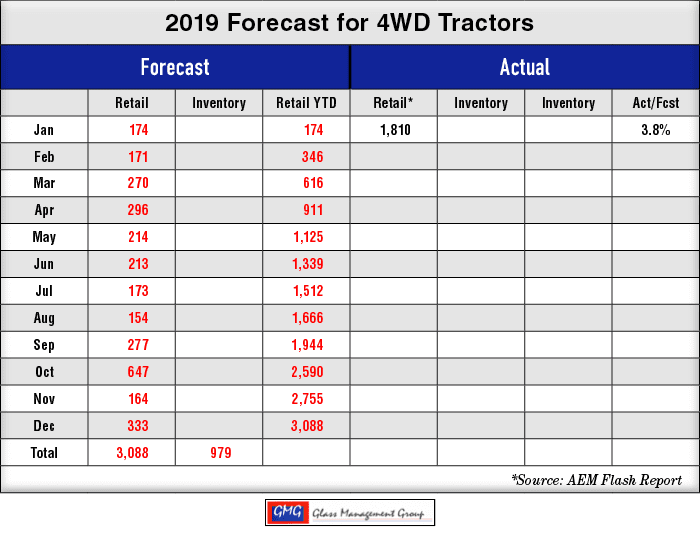 Combines – The sales for Combines in January was above last year’s retail sales but was significantly below our monthly forecast by -25%. 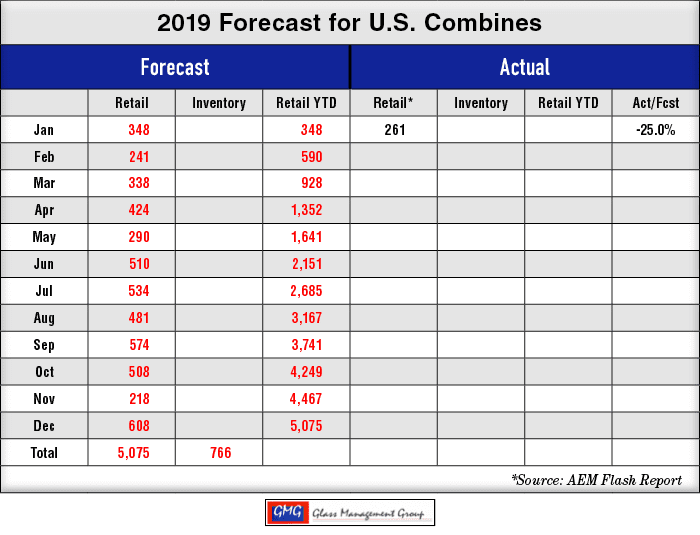 Nothing has hit the pocket books of the U.S. farmer harder than the tariff dispute between the U.S. and China and the resultant decline in commodity prices during 2018.  Commodity prices, particularly soybeans, have gained slightly from their earlier lows but are still well below the levels of 2017.

Recent negotiations between the two countries have given rise to renewed hope that an end is in sight. Any positive move will register with an uptick in commodity prices and the recent purchase of 5 million tons of soybeans in late 2018 certainly was seen as a positive action. Now China has announced their intention to once again purchase U.S. produced soybeans in 2019 and followed that announcement with real orders that are still considered to be very small compared to the 2017 purchasing level.

Meanwhile, U.S. producers have found other buyers of their crops, albeit at a much lower price, and those buyers will most likely remain even after this crisis fades into history.

These factors, and many others, contribute to the Net Farm Income for U.S. farmers and ranchers and available cash is one of the dynamic reasons that farmers purchase new equipment. Replacement of current equipment on the farms and ranches drives the majority of the annual demand for new equipment and that source of purchases has remained somewhat steady for the past decade or so.

The U.S. agricultural economy is a part of the total U.S. general economy, which has remained strong and growing for the past 24 months or so. In order for farmers to realize an increase in demand for their products, there must be an underlying demand from the general public. That demand is present and appears to be moving into positive territory with each passing month.

Our research has shown that the smaller tractors (<60HP) are primarily driven by the strength of the U.S. general economy. The growth of jobs, a steady increase in salaries and the strength of the U.S. stock markets has brought about a renewed confidence in most consumers and that has been readily noticeable in the increase in purchasing of these smaller tractors and related equipment.

U.S. farmers have demonstrated a growing confidence in their markets and in recent surveys have indicated that they will be replacing equipment in the coming year. All of this contributed to a more positive attitude among U.S. producers and the prospects that 2019 will be a better year that 2018 in terms of equipment purchases.

The U.S. harvest, for the most part, is now in the bins with farmers waiting for any uptick in prices to sell their crops. The announcement of China’s intention to purchase agricultural commodities from the U.S. again has had a slight stabilizing effect on prices but those prices have not returned to a profitable level for many producers.

Tractor and combine sales for 2019 indicate an improvement over 2018 and the strength of the general economy will continue to power the smaller horsepower tractor sales. Production farmers continue to feel the pressure of low commodity prices and that is reflected in the increase in farm loans, particularly in production loans, reported by the Kansas City Federal Reserve Bank.

There have been recent reports in various publications of Chapter 12 bankruptcy filings by U.S. farmers being on the rise. Many of these reports were filled with reports of high double digit percentage increase but the underlying data showed that the actual number of farmers making these filings was rather low. There is no doubt that farmers who are highly leveraged are having a difficult time, particularly when their bank declined their recent loan applications. Most U.S. farm producers are having a difficult time during this period of low commodity prices but they continue to work their farms and purchase new equipment.

The rebound of the stock market in January, coupled with record low unemployment is the U.S., will generate another very good year for Rural Lifestyle dealers and manufacturers of smaller equipment.