The latest episode of On the Record is now available! As we returned from the Precision Farming Dealer Summit in Indianapolis last week, it was clear that precision technology is going to strongly influence the direction of the farm equipment industry. In this episode, we cover how Deere chairman and CEO Sam Allen credits much of the company's recent success to new precision technologies it's introducing. Jack Zemlicka also shares his take aways from the Precision Farming Dealer Summit, and we talk with Norbert Beaujot and Robert Saik from DOT Technologies about the future of their autonomous platform. Tim Thein from Citi shares his outlook for 2019 farm equipment sales and we also look at the results from the 2019 Rural Lifestyle Dealer Business Trends & Outlook report.

Coming off the sold-out Precision Farming Dealer Summit in Indianapolis last week, it’s clear that precision farming technologies are dictating the direction the ag equipment industry is heading. Its impact on farming and John Deere’s business was noted by Sam Allen, Deere’s chairman & CEO, in his year-end address to stockholders. In 2018, Deere reported net income of nearly $2.4 billion, the fifth highest total in the company’s history.

He credits much of the company’s recent success to the new precision technologies it’s introducing, as well as the dealers’ role in delivering it to Deere customers.

In his message, Allen said, “Precision agriculture made major strides in 2018 as more and more customers are realizing its productivity-enhancing benefits … Using the John Deere Operations Center, agricultural customers have stored data representing more than 125 million acres across the globe.”

He pointed out that Deere’s largest business, Agriculture & Turf equipment, reported its operating profit climbed to $2.8 billion, a 12% increase over 2017. Allen said the company’s strong performance was the result of better market conditions, fueled by replacement demand for new equipment, as well as customer enthusiasm for innovative new products featuring the latest precision technology. 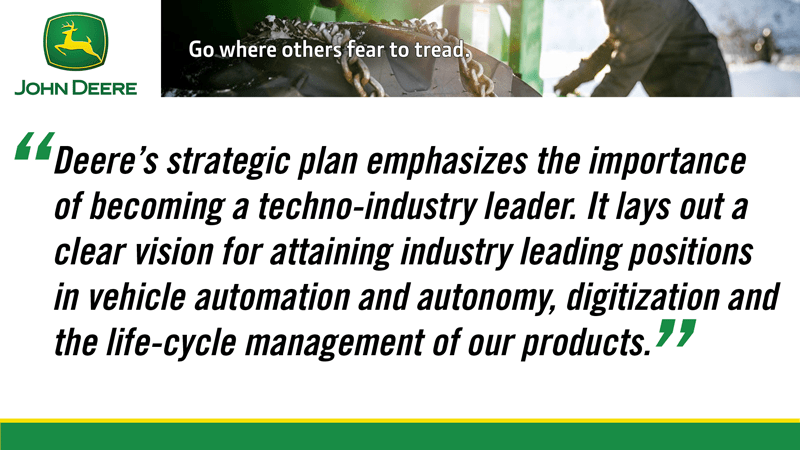 Allen said, “Deere’s strategic plan emphasizes the importance of becoming a techno-industry leader. It lays out a clear vision for attaining industry leading positions in vehicle automation and autonomy, digitization and the life-cycle management of our products.” 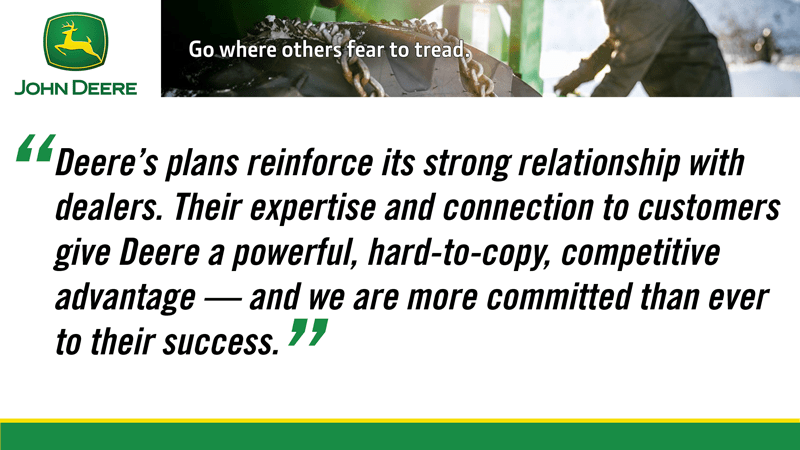 He also underlined the important role dealers playing in the company’s strategic plans. “Deere’s plans reinforce its strong relationship with dealers. Their expertise and connection to customers give Deere a powerful, hard-to-copy, competitive advantage — and we are more committed than ever to their success.”

This week’s Dealer on the Move is Heritage Tractor.

Having returned from the fourth Precision Farming Dealer Summit last week in Indianapolis, I’ve had an opportunity to reflect on a few of the highlights.

The sold-out conference drew more than 170 attendees including representatives from 69 dealerships throughout 26 states, along with Australia and Canada. With a theme of Building Business Value with Recurring Revenue, the event featured conversations on how to incorporate agronomic offerings for profit, reinforcing the return on investment approach to selling services and leveraging long-term trust of customers for recurring revenue.

One of the most talked-about sessions looked at creating a culture of advancement and growth within a precision dealership. Skip Klinefelter, owner of Linco-Precision in El Paso, Ill., noted during his opening general session that success and survival of precision dealers will  require continuous collaboration and internal problem-solving — both of which are cornerstones of stability.

“In our company, everyone is invited to bring anything to the table they want. We have an hour-long meeting that we schedule. We do have trainings that last longer than that, but it either half an hour or an hour — usually it’s an hour meeting when we pull the remote salesmen in. We publish an agenda and we stick to it. When you come to the meeting with an issue or problem, you are welcome to bring anything you want to the table. But you are not welcome to bring it there without an answer. I don’t care if you only have a complaint, try to have a solution for it.”

DOT Technologies’ Dot Power Platform will be available for sale in select regions of Saskatchewan and Alberta in 2019. As the company prepares to bring its product to market, we caught up with owner and founder Norbert Beaujot and Robert Saik, the newly named CEO of Dot Ready Retail during the National No-Tillage Conference last week in Indianapolis.

Dot Ready Retail was formed to market the technology and in March will host a DOT Demo Day at the University of Arizona Maricopa. Currently, the unit is being tested in Arizona to put it through weather conditions that are different from Saskatchewan’s.

Beaujot says the work in Arizona will expand the testing period as well as expose the technology to a greater group of farmers. He says the next batch of units will be ready for spring delivery and over the next 12 months they’ll have another 15 units built and in the field. And the following year DOT plans to manufacture about 35 units.

Beaujot says the leading edge farmers are ready for the technology, and once DOT is able to show them the proof with the test data, the number of farmers interested will certainly go up.

Saik says he envisions holding more DOT demo days in which farmers can hook up a variety of implements to the unit.

“The vision that I have working with the likes of the University of Arizona, is that we will eventually have DOT Demo Days there, where we have a plethora of implements available for DOT to hook up. And farmers will be able to go say, "I'd like to see how that works." It was interesting, we did a DOT farm focus group in Regina not more than a month ago. The guys were standing out in the frozen Regina tundra watching DOT go back and forth. There was a couple farmers that went around, and I was watching this one guy, and I'm watching the wheels turn. I go up to him and said, ‘Davy, what's going on inside your head?’ He goes, ‘I think this thing could cut hay, rake hay, bale hay, and pick up the hay, and I wouldn't have to touch the hay.’ That's what he said. Yeah, he said that. So, what's going to happen, I think what's going to happen is as guys get DOT, I think there's going to be all kind of metal bashing going on in shops again, because they're going to have fun building stuff. You could just see it…”

While slightly fewer dealers who focus on the rural lifestyle segment of the equipment business expect 2019 rev­enues to match the levels they experi­enced in the past year, a majority of them anticipate solid sales revenues during the next 12 months.

Survey results from Rural Lifestyle Dealer, show that nearly 59% of rural equipment dealers expect total revenues to be up 2% or more in 2019, compared to 64% who expected similar growth for 2018.

This past year was another record breaker for sales of tractors under 40 horsepower. According to the year-end numbers from the Assn. of Equipment Manufacturers, dealers sold nearly 170,000 compact tractors in 2018. This is up nearly 9% vs. 2017 and up more than 80% compared to 2009 when compact tractor sales posted its lowest sales numbers in more than two decades.

The complete survey results appear in the Winter 2019 edition of Rural Lifestyle Dealer.

Thomas Edison had said that electricity — and machinery — would save the farmer. But, in 1901 the Secretary of Agriculture James Wilson  offered a different opinion. He said, “The predication of Mr. Edison that electricity will come to the rescue of the farmer during the next 50 years, is likely to prove true, but not in the way of heavy machinery. It will come about, in my opinion, through the use of electricity in transportation, mining and manufacturing. It is just a trifle improbably that anything will ever be invented to take the place of a team of horses for farm work.”

As always we welcome your feedback.  You can send comments and story suggestions to kschmidt@lessitermedia.com. Until next time, thanks for joining us.