Happy New Year! The latest episode of On the Record is now available. In this week’s program, we look at how machinery costs for Minnesota farmers is keeping net farm income down despite growth in gross farm income. We also look at which dealers made the most M&A moves during 2018, dealers precision farming sales outlook for 2019, Buhler Industries’ year-end results and the potential for improved dairy prices in 2019.

Minnesota farmers have seen their gross income increase over the last 15 years, but their net income has taken a hit in recent years, according to University of Minnesota economist Joleen Hadrich.

“We have a lot more sales coming in [but] our expenses have increased exponentially,” says Hadrich. Much of that is due to how quickly machinery investments increase during that period, she says

Hadrich explains that in 2002 most farmers had about $300 per acre invested in machinery, with repairs averaging about $6,000 annually. In 2010, that average increased to $498 per acre, though repairs dropped to about $3,300. This was around the time producers were enjoying higher incomes due to favorable commodity prices. 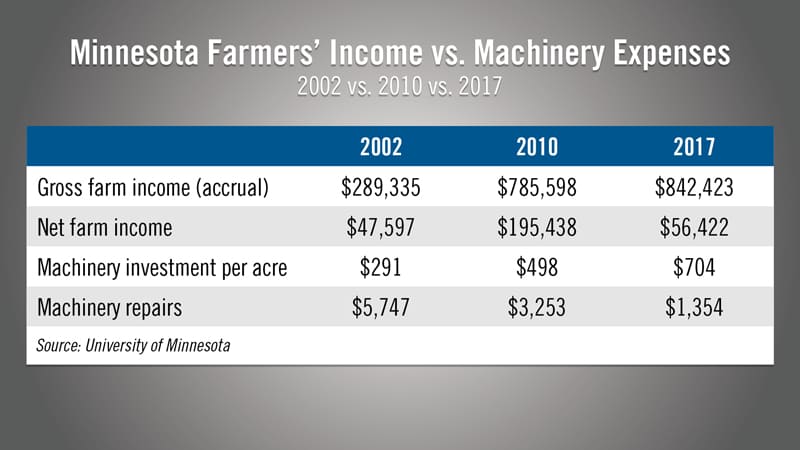 Dealer consolidation continued in a big way in 2018. We looked back through Ag Equipment Intelligence’s reports on dealer mergers and acquisitions and determined that H&R Agri-Power and Ag-Pro Companies made the biggest moves in 2018.

While Boston, Ga., based Ag-Pro Companies had fewer acquisitions in 2018, it added more dealer locations at 11. Ag-Pro acquired Wilson Equipment in Spartansburg, S.C. In addition, it acquired 10 stores in Ohio and Kentucky from JD Equipment in December.

Prior to the deal with Ag-Pro, JD Equipment had acquired 2 stores from Cahall Brothers Inc. in June and added an $800,000 expansion to its Zanesville, Ohio, store.

As dealers turn their attention to the new year, 2019 looks to be a relatively strong one for precision sales. According to Ag Equipment Intelligence’s 2019 Dealer Business Outlook & Trends report, some 40% of North American dealers cited precision farming products as their best bet for improving unit sales this year. 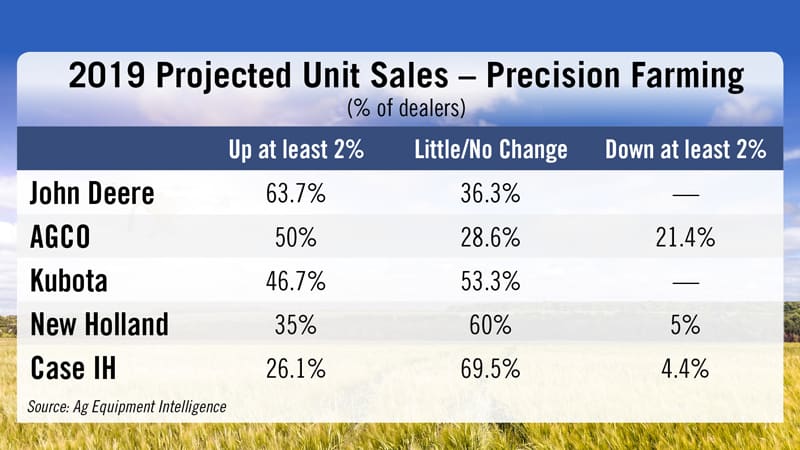 Other noteworthy results of the report included half of AGCO dealers forecasting at least 2% unit sales growth in precision products in 2019 However, more than 21% project a sales decline of at least 2% this year, the highest total among OEM dealers.

Reductions in headcount and other measures to improve cost efficiency concluded a tough year for staff and management at Buhler Industries. The company reported its biggest ever financial loss and a C$24 million or more than 7% drop in revenues for 2018 from the year prior. 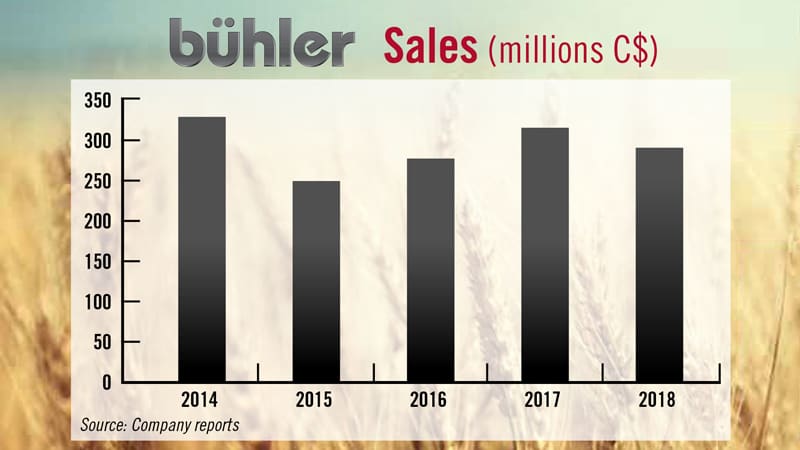 CEO Yuri [reeah-ZAHN-off] Ryazanov and newly appointed President of the company, Marat Nogerov, emphasize that some 40% of the C$49.5 million loss relates to changes in the U.S. tax rate and management’s decision to write down the company’s deferred tax assets. Other factors include significant discounts to incentivize sales and write downs of certain inventories. 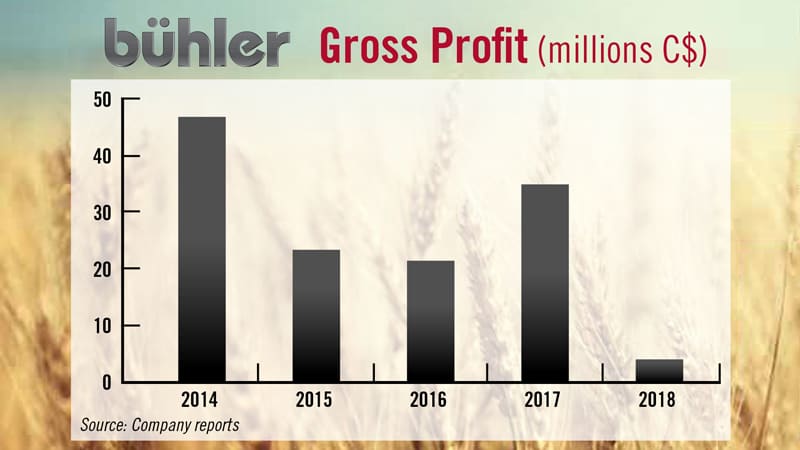 “Field inventory, particularly in the United States, is higher than expected, with an excess of aged machines,” says Ryazanov. “Margins were reduced throughout 2018 in an attempt to increase market share. However, the strategy was not successful and in 2019 the company will improve wholegoods inventory management and place additional emphasis on logical policies and programming.”

In addition to naming Nogerov president of the company, Buhler also made other top level changes to its staff. These included naming Alexey Nikitenko as vice president of Farm King, the promotion of Olga Shopp to director of engineering, and the appointment of Adam Reid as the vice president of sales and marketing.

The company expects 2019 sales to be flat vs. 2018, but it expects to significantly reduce losses by focusing on margin improvement and cost reduction.

Price Improvements for Dairy in 2019

Optimism in the dairy business has been hard to come by. Average milk prices hit a 4-year low in 2018 at $14.60, according to USDA, making 2018 the U.S.’s lowest average annual price for milk since 2009. So U.S. dairy producers — and the equipment dealers and manufacturers that serve them — could use all of the optimism they can get. 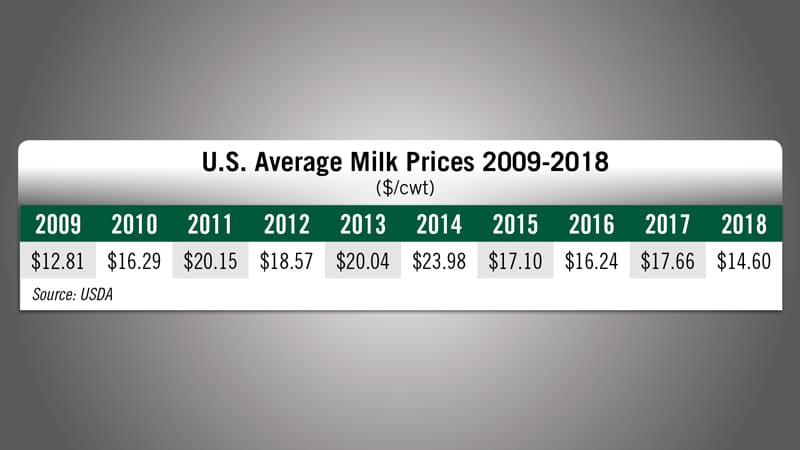 Milk cow numbers have been declining since June, with November numbers down 38,000 head from 2017. According to USDA, cow numbers are likely to continue to decline into 2019. The increase in milk per cow has slowed to 1%.

USDA’s December forecast has milk production for 2019 increasing 1.3% from 20,000 fewer milk cows producing 1.5% more milk per cow. This level of increased milk production normally would be positive for milk prices. But milk production could even turn out lower. Milk cow numbers could fall by more than this, reports Wisconsin Agriculturist. A wet spring and fall reduced silage and forage quality particularly in the Northeast and Midwest, which could reduce the increase in milk per cow.

Dairy exports are a major factor that will determine how much milk prices will improve. An anticipated slower growth in world milk production is positive for exports. But, if trade disputes with China and Mexico remain, dairy exports are likely to fall below 2018 levels and will have a negative impact on prices.

But according to USDA, there is a possibility that prices could be better than this, with Class III reaching the high $16s or low $17s by the fourth quarter.

And now from the Implement & Tractor Archives..

During the Second World War, an agricultural labor shortage again developed. The government formed the U.S. Crop Corps to recruit and train young women from the cities to replace the men called to military service. This poster —which I received as a gift this Christmas — shows a young woman driving a tractor through a farm field, pausing to turn and give the "V for Victory" sign. The government printed thousands of posters and provided a space at the bottom for use by local groups.