The two highest acreage crops in North Dakota, soybeans and wheat, project limited returns to labor and management in most regions for 2019, says Andy Swenson, North Dakota State University Extension farm management specialist. Generally, hard red spring wheat projects a return between $5-$10 per acre. The strongest return, $22 per acre, is projected in the northeastern region, but losses of $5-$10 per acre are projected in the northwestern, south central and southern Red River Valley regions.

“Surprisingly, soybeans project positive returns to labor and management in
all but one region, despite lower soybean prices compared to last year's budgets,” says Swenson. “There is a projected loss of $10 per acre in the northeastern region, but for the rest of the state, returns range from $1 an acre in the southern Red River Valley to $33 per acre in the north central region.”

The third most popular crop by acreage, corn, projects losses in all regions. A loss of $5-$10 per acre is projected for the western regions and for the southeastern, and losses between $20-$40 per acre are projected in the other regions. 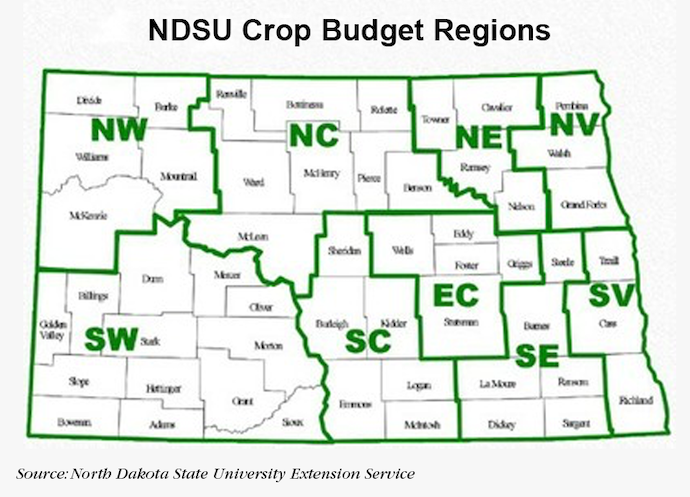 Drybeans, malting barley, lentils and chickpeas normally show relatively strong returns, but weak prices for these commodities caused 2019 profit projections to be much lower. Drybeans project a positive return to labor and management of $31 per acre in the north central region and returns of $7 for the south central and southeastern regions.  All other regions project losses ranging from $1-$10 per acre. Malting barley projects losses by region between $20-$90 per acre. Projected losses for growing lentils range from $35-$70 per acre and for large chickpeas about $10 per acre.

“The southwestern, north central, and south central regions had the most crops that project a positive return to labor and management,” Swenson adds. “However, the returns are modest.”

For most crops the projected total costs per acre were slightly higher than last year’s projections. Fertilizer, interest expense and expenditures for chemicals were higher. Expenditures for seed was generally similar to last year. Crop land rents for most regions declined and projected crop insurance expenditures were generally lower.

Swenson cautions that the budgets are guides for large multi-county regions and that returns and costs can vary considerably between producers within a region. Also, the budgets estimate returns to labor and management with no consideration of price and yield variability or risk. A perfect “apples-to-apples” comparison of crops is not achieved because different levels of labor and management and risk exist.

The NDSU Extension-developed budgets are available online at http://www.ag.ndsu.edu/farmmanagement/crop-budget-archive, or by searching
online for NDSU Crop Budgets.