Vincennes Tractor was Farm Equipment's 2008 Dealership of the Year.

Vincennes Tractor Inc. was formed in 1978 by Edgar Kuhlenschmidt and Rick Linenburg when they took over an existing John Deere dealership in Vincennes, Ind., from R.D. VanEaton. Although just a single-store operation at this point in time, the heritage of the organization has its roots in multi-store operations, before they were fashionable.

Farmers Equipment Co. Inc. grew to as many as 5 locations at one time. Then Deere told Kuhlenschmidt to break them apart. Concerns over “having all of their eggs in the same basket” lead to the, then store managers, becoming partners with Edgar, each having their own separate corporation.

Vincennes Tractor Inc. has built its business on two very simple statements. “With us, service is the other half of a great product”, and “Quality in Every Action!”

Although the dealership is 72 years old, it is the area’s leader in providing the newest and most up-to-date farm technologies, support and machines.

"We have almost 500 Years of John Deere Experience, ready to serve customers, and our management staff alone has almost 175 years of service to our customers. We have grown by providing this area the best in John Deere Parts, Service and Sales," says Rick Linenburg, general manager.

In 1978, VTI operated out of a quest hut building on Hart Street inside Vincennes.

In late 2006 an additional 4,800 square foot addition was added to the shop area complete with overhead cranes.

In January of 2008 a 3,200 square foot addition was started that will almost double the size of the current 2,400 square foot showroom and add additional space to the parts department, as well as some additional office space. 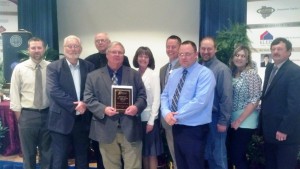 Also in 2012 Wayne and Robert Johnson, long time customers from St. Francisville, Ill., purchased stock in Vincennes Tractor. Wayne is now involved in sharing his years of farming and management experiences with the management team.

In 2013 an additional 5 acres of ground was purchased bringing the landscape to about 15 total acres.

Dealership of the Year 2012: Johnson Tractor