The latest episode of Ag Equipment Intelligence's On the Record is now available! In this week's program, we share one analyst's 2019 outlook for Deere & Co. and Titan Machinery in addition to Deere CEO & Chairman Samuel Allen's concerns over the lasting impact tariffs could have on U.S. farmers. We also discuss Ag-Pro Companies expansion into Ohio and the dealership's rapid growth since 2014. Also in this episode: technology lessons from the auto industry, changes in farm profits and farmers' income and an improvement in producers' interest in making large investments, like machinery.

At least one analyst, Baird’s Mircea (Mig) Dobre, thinks 2019 will be a good year both for Deere & Co. and North Dakota-based Case IH dealership Titan Machinery.

In a note to investors, he says Deere had a good setup even prior to recent positive trade developments. He points out, among other things, precision ag technology and an aging fleet continue to drive replacement demand; early order programs, order books and November sales are all encouraging; and that North American large ag demand remains closer to trough than midcycle.

On top of that is the truce between the U.S. and China. Dobre says a new trade deal between the countries could lead to further demand boost for U.S. exports which in turn further supports equipment purchases. This could mean an acceleration of the equipment replacement cycle, in which both Deere and Titan stand to benefit. 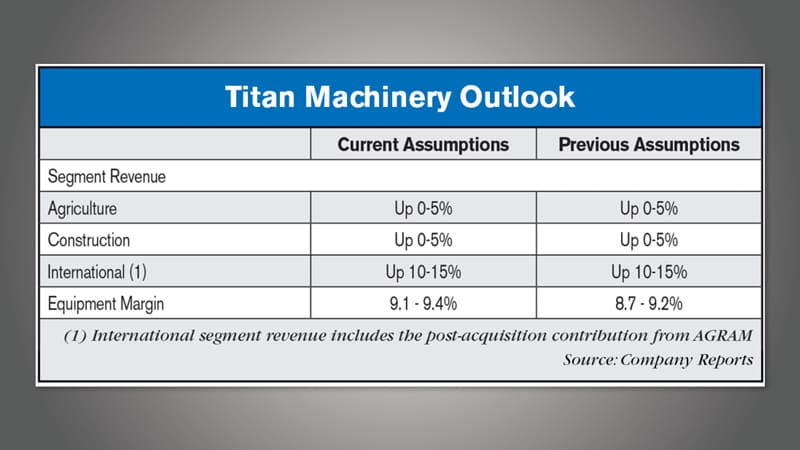 Another positive sign from Titan is the better than expected year-to-date margin, which speaks to both the stability of used equipment prices and the level of discount and incentives a dealer has to incur.

However, Deere & Co. CEO and Chairman Samuel Allen says he’s worried that ongoing trade tensions between the U.S. and China might have a lasting impact on the ag industry, particularly soybean growers.

In a recent interview with CNBC, Allen points out that China’s 25% retaliatory tariff on U.S. soybeans means the country is importing from Brazil and elsewhere. This could lead to lingering issues of oversupply.

Says Allen, “The issue we’re worried most about is that as China buys soybeans from Brazil or whoever, structurally, countries like Brazil will be able to bring more land into production quicker, and as a result of doing that we’ll end up with an oversupply for a longer period of time, which will mean that the pain the U.S. farmer is feeling now will go on for a much longer period of time, much like the grain embargo in the ‘80s.”

Allen and others worried about trade tensions might have felt a sense of relief in recent days as the U.S. and China announced a truce in the trade spat.

Ag-Pro Expands Its Reach to Ohio

This week’s Dealer on the Move is Ag-Pro Companies.

Ag-Pro Companies, already the largest North American farm equipment dealership group based on the number of locations, has not only added 10 new locations but it has expanded its regional influence with the acquisition of Ohio-based JD Equipment.

When the deal is completed, which is scheduled for Dec. 12, Ag-Pro will operate 71 total locations. Prior to this most recent acquisition, which was announced to JD Equipment customers on Nov. 30, Ag-Pro locations were clustered in the Southeast and southern Texas. 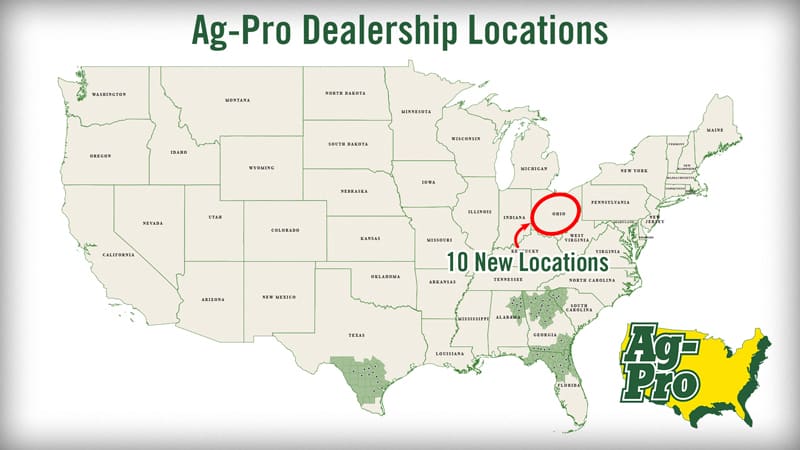 The company operates 22 locations in Georgia, 20 in Texas, 9 in Florida, 7 in Alabama, 4 in South Carolina and now 10 in Ohio. The dealership group, with headquarters in Boston, Ga., also operates a rental outlet in Georgia and according to its website it also has 4 new locations on the drawing board: 2 in Georgia, 1 in Texas and 1 in Florida.

Ag-Pro started out with a single John Deere dealership location in 1958, originally named Boston Tractor Co. At one point, the company also operated 7 dealer locations in Arkansas known as Agricultural Productivity Companies, but transferred these to another Arkansas-based dealership, leaving Ag-Pro with 22 locations across Georgia, Florida and South Carolina.

Since then the company has been on a growth tear, acquiring or opening 49 locations and expanding its reach to Texas, Alabama and now Ohio. Twenty two of these locations have been added since October 2014.

JD Equipment was owned and operated by the Mitchell family for 36 years. The acquisition is expected to be completed by December 12.

Technology Lessons from the Automotive Industry

The manufacturing models of the farm equipment and automotive industries are intertwined, with innovations developed for consumer vehicles often finding their way into the production of ag machinery.

The momentum and consumer appetite for electronic and autonomous cars was reported as one factor in General Motors’ recent announcement to scale back traditional vehicle production in North America, resulting in planned plant closures and layoffs.

The Washington Post reports that the cost-cutting measures are designed to keep GM competitive in the evolving market and reflect an ongoing shift in consumer vehicle preferences.

So will ag equipment manufacturers face the same dilemma in the future as ag engineers refine electronic and autonomous machinery?

Not necessarily, says Todd Janzen, agriculture attorney with Janzen Ag Law in Indianapolis. Janzen suggests there are other factors which more heavily influenced GM’s decision which may not run parallel to ag manufacturers.

However, Janzen notes that ag manufacturers on the cusp of field-ready autonomous machinery and working toward fully electric equipment are wise to continue development and follow the trend being set in the automotive industry.

“One of the real lessons here is that it takes an enormous amount of capital to re-tool for a different market and product segment. When you look at the amount of money that these companies are spending to shift production with the new electric vehicles or autonomous technology, it’s billions of dollar and it takes years of development. I think the big lesson for the ag industry is to not wait until everybody else is too far ahead and you’re too far behind, but to invest in the new technology ahead of the curve, instead of when it’s too late.”

Janzen adds that farmer interest will influence the adoption of autonomous and electric equipment, but that as the technology matures, perhaps out of the automotive industry, it could become more affordable and attractive. 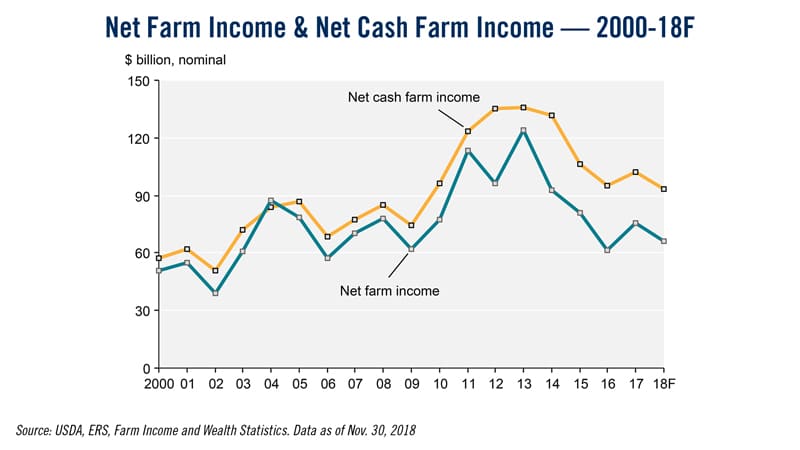 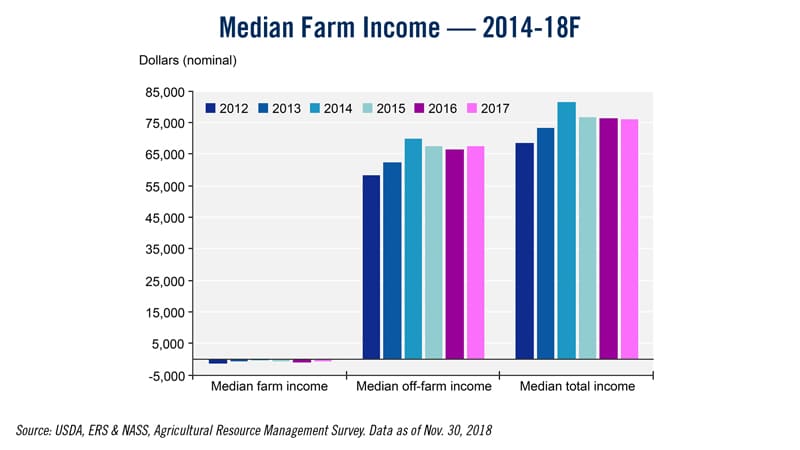 Cash receipts for all commodities are forecast to increase $2.5 billion, or by less than 1% to $374.9 billion in 2018 in nominal terms. Total crop receipts are expected to increase $3 billion, up 1.5% from 2017 levels, following expected increases in corn and soybean cash receipts. 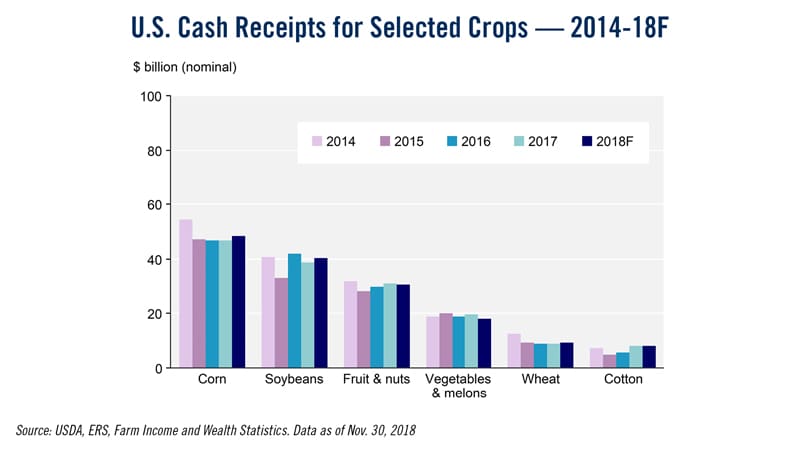 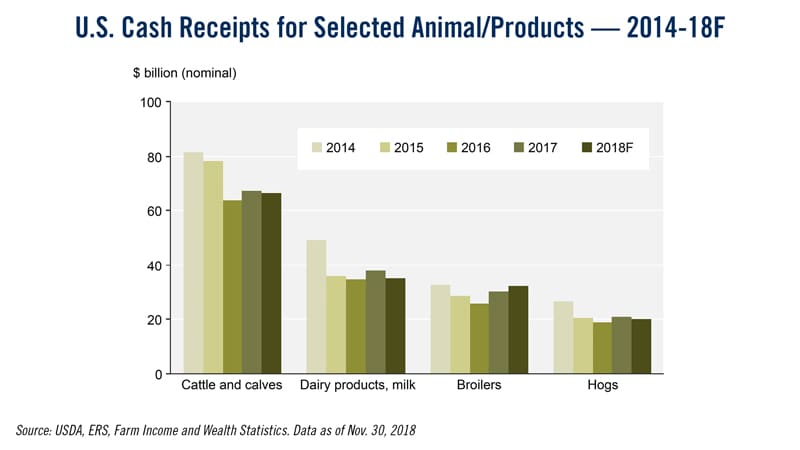 Direct government farm payments are forecast to increase $2.1 billion, or 17.9%, to $13.6 billion in 2018, with most of the increase due to higher anticipated payments for supplemental and ad hoc assistance and miscellaneous programs, including Market Facilitation Program payments to assist farmers in response to trade disruptions. 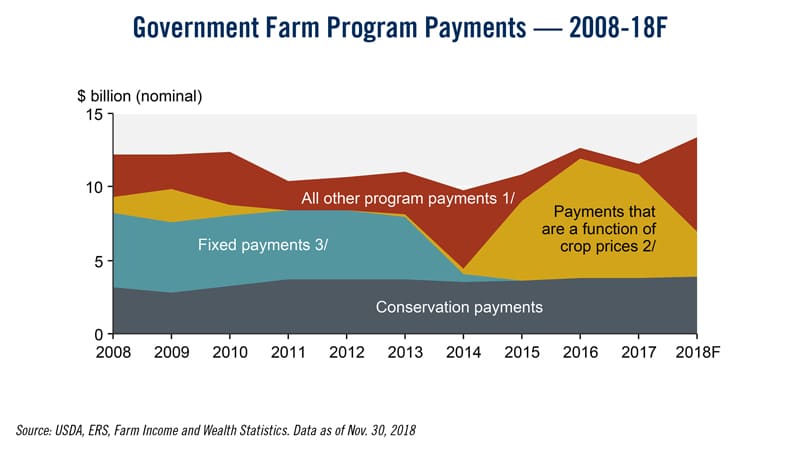 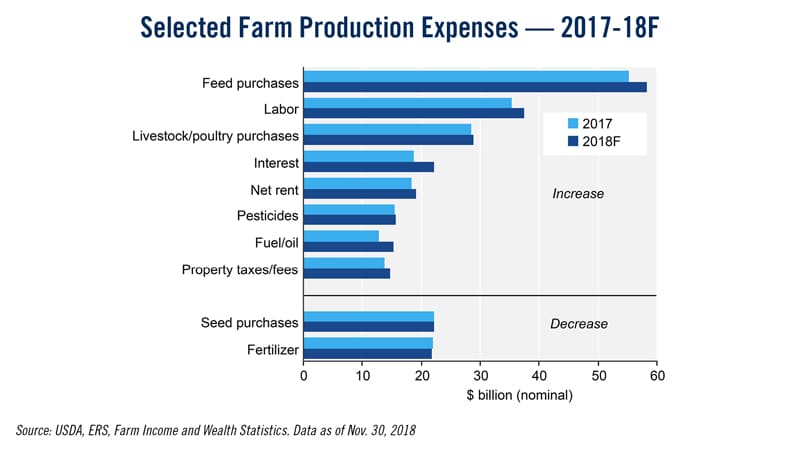 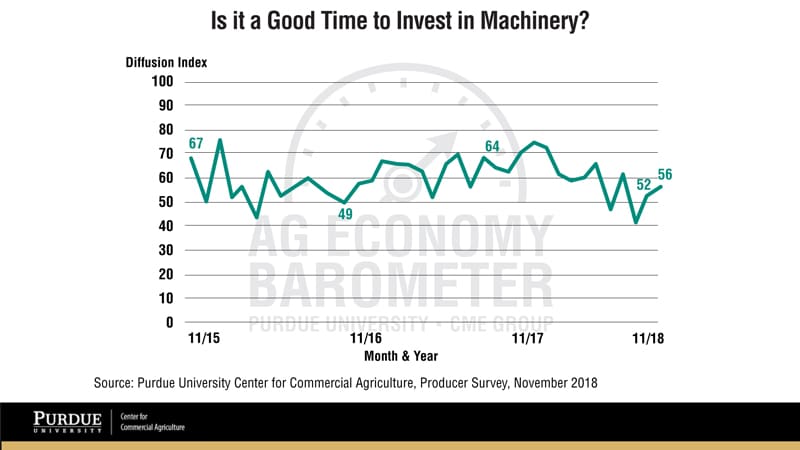 The index Purdue uses to measure willingness to make such investments stood at 56 in November, up from a reading of 52 in October. Purdue University ag professors James Mintert and Michael Langemeier note farmers’ attitudes toward large purchases have been up and down all year.

“Producers were most favorably inclined toward making large investments early in the year when the [index] peaked at a reading of 74,” say Mintert and Langemeier. “The index weakened in late winter and early spring before rebounding in late spring, just before trade disruptions hit the agricultural sector. By late summer, the index was more than 30 points below its January peak, bottoming out at a reading of 42 in September. However, since September producers’ view regarding the advisability of making large investments has improved, rebounding to a reading of 52 in October and improving again to 56 in November.”

Volunteers at the Central Washington Ag Museum completed the restoration of an antique belly dump wagon, believed to have originally been built around 1910. This type of wagon is generally found in very poor condition due to the heavy and difficult work it was created for — hauling dirt, gravel and other building materials. They were called a “Belly Dump” for the metal-lined doors of the bed, which were opened and closed by a chain mechanism to drop the contents.

The belly dump wagon is now fully functioning, and it took hundreds of man hours and a lot of skill.

The wagon was originally pulled by horses, so the crew has fitted it with 2 tongues – one for horses, and one for a tractor. Since there is a Horse-n-Harness group that is part of the Central Washington Ag Museum, this wagon will be used in the fashion it was originally built for during select events at the Museum. 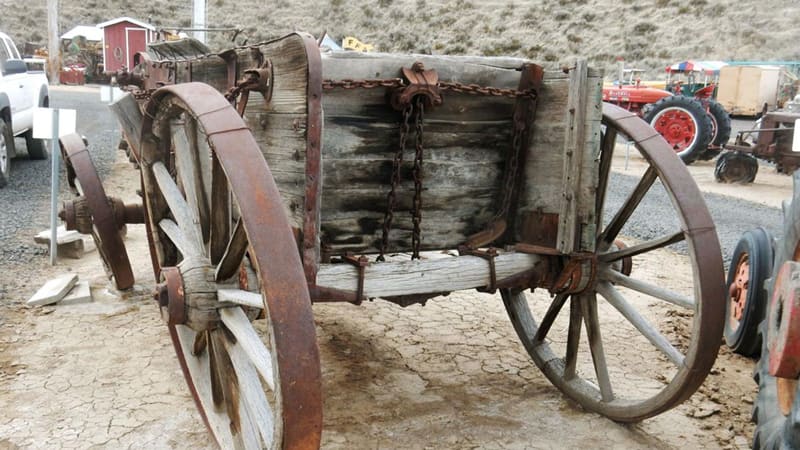 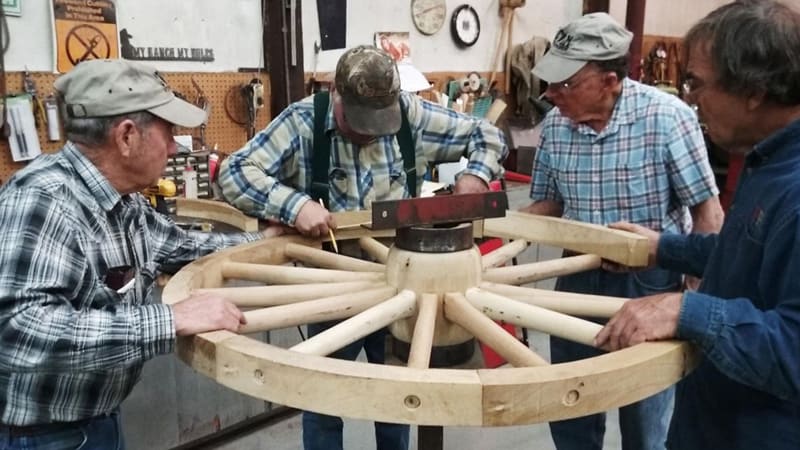 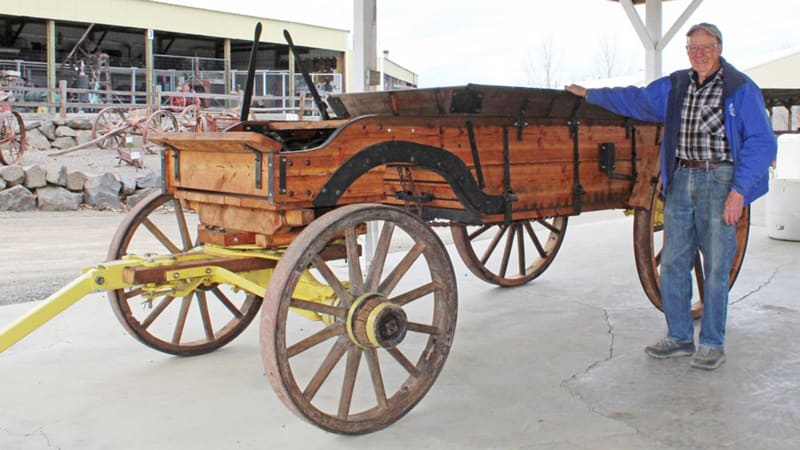 As always we welcome your feedback. You can send comments and story suggestions to kscmidt@lessitermedia.com.