Roundup of the Latest Quarterly Earnings

Ag equipment manufacturers and dealers have in recent weeks released their quarterly earnings. Sales for equipment manufacturers and/or their agricultural segments largely improved the last three months. Meanwhile, Canada’s largest dealership network announced it was opening a used equipment outlet in Kansas, marking the most recent step in its foray into the U.S. in accordance with its 5 year growth plan.

AGCO Has Another Strong Quarter with 11.5% Year-Over-Year Sales Growth 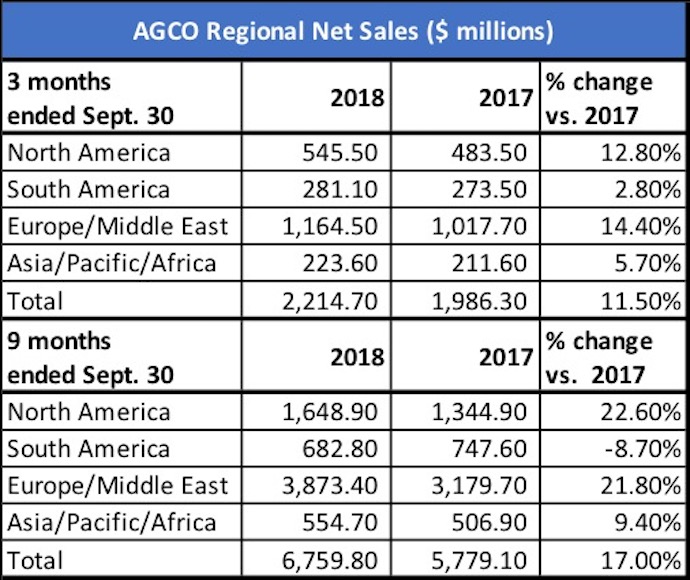 Industrial Activities net sales were flat compared to the third quarter of 2017 (up 4% on a constant currency basis), with an 18% improvement in construction equipment and a 4% increase in agricultural equipment offset by declines in Commercial Vehicles and Powertrain 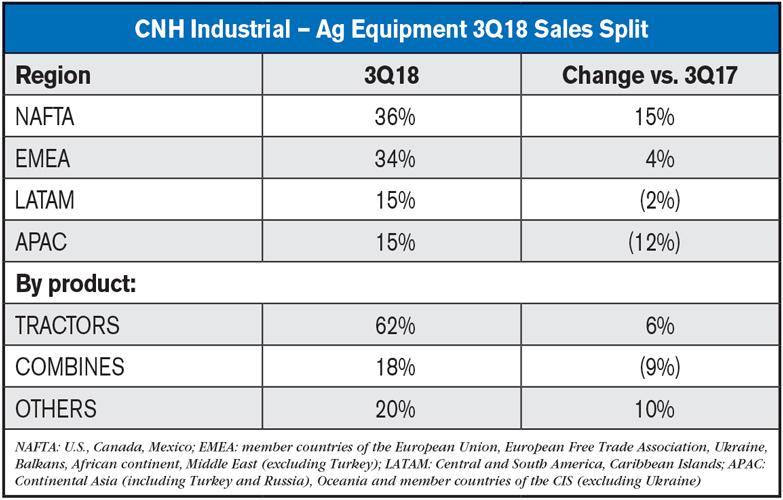 Agricultural equipment’s net sales increased 4% in the third quarter of 2018 compared to the third quarter of 2017 (up 8% on a constant currency basis). The increase was primarily the result of price realization across all regions and higher sales volumes in NAFTA, partially offset by a revenue decrease in APAC, primarily Australia. Anticipated raw material cost increase was offset by manufacturing efficiencies and lower warranty cost due to improved quality performance. Similar to previous quarters, Agricultural Equipment maintained increased product development spending by 10%, related primarily to precision farming and compliance with Stage V emissions requirements.

2018 Outlook. Despite increasing uncertainties related to the trade policy environment and raw material inflationary headwinds, together with foreign exchange volatility in the emerging economies, CNH Industrial is confirming its 2018 guidance, which calls for net sales of Industrial Activities at approximately $28 billion.

Revenue from Kubota’s Farm & Industrial Machinery segment increased by 8.7% vs. the same period in the prior year to about $10 billion and accounted for 83.5% of consolidated revenue through the first 9 months of 2018.

Kubota revised its forecasts for revenue for the year ending Dec. 31, 2018, upward to $16.1 billion, an increase of $877 million from the previous forecasts. The company said this revision was made because overseas revenue in tractors and construction machinery is expected to increase significantly mainly in North America compared with the previous forecasts. 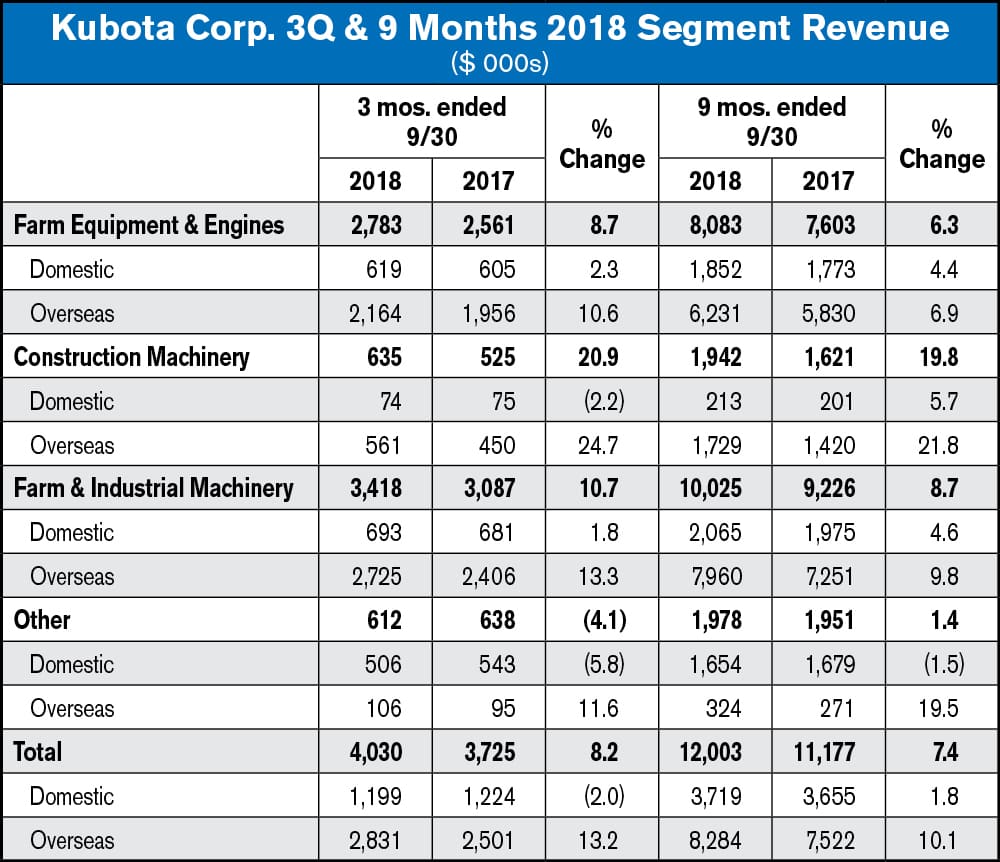 Cervus Equipment Corp. announced that third quarter profitability growth was driven by performance in its Transportation segment, as well as solid agricultural results for the quarter ended Sept. 30, 2018.

“In our Agriculture segment, Western Canadian producers experienced difficult harvest conditions in the third quarter, increasing demand for our reliable, well-conditioned used equipment,” said Graham Drake, Cervus Equipment’s president and CEO. “With favorable weather returning in October, harvest has resumed along with our parts and service support for producers in their critical window. Looking ahead, we will continue to leverage opportunities to market used agricultural equipment and parts in the fourth quarter.”

Total service gross profit margin percentage increased by 3.6% in the third quarter of 2018, compared to the same period in 2017, due to continued service optimization progress.

Rocky Mountain Dealerships (RME), Canada’s largest agriculture equipment dealer, today reported its financial results for the 3 and 9 months ended Sept. 30, 2018. RME also announced that it will begin selling late-model used equipment to farmers based in the U.S. via an outlet store in Tonganoxie, Kan., which is located on the outskirts of
Kansas City.

Early snowfalls across the Canadian Prairies stalled harvest activity throughout mid- to late-September, decreasing in-season demand across all categories. Despite the impact of the unusual harvest, compared to the second quarter of 2018, RME continued to draw down its inventory of new and used equipment even with the addition of $30 million in inventory from the acquisitions of John Bob Farm Equipment and Olds in the third quarter.

Rocky Mountain’s move into the U.S. was expected. During an interview with Ag Equipment Intelligence last summer, the dealership group said expanding its geographical reach would be part of its 5 year growth plan.

According the RME, the new facility is situated in close proximity to the sizeable U.S. agricultural markets of Kansas, Iowa, Nebraska, Missouri and Oklahoma as well as manufacturing facilities from which new equipment is routinely being shipped to RME locations within Canada. “By backhauling late model used equipment to our new Kansas location, we are able minimize the associated transportation costs.”

Garrett Ganden, RME president and CEO, says of the announcement, “This undertaking establishes a beachhead for RME in the U.S. market at a time when the equipment profile is aging due to several years of depressed new unit deliveries. We believe that our lightly-used, competitively-priced equipment is well positioned to refresh this aging profile. This additional equipment distribution channel represents a new growth avenue for RME and does so with minimal capital commitments and start-up costs.”

Regarding the ag division’s performance, Ron Robinson, Alamo Group’s president and chief executive officer, commented, “We are concerned about the agricultural outlook which had been showing signs of strengthening, but now is faced with a backdrop of declining farm incomes and the impact that new tariffs are having on demand for certain agricultural commodities. Our Agricultural Division results, while off, are still good, primarily due to improvements in our operational efficiencies which helped mitigate the impact of higher input costs and lower sales.” 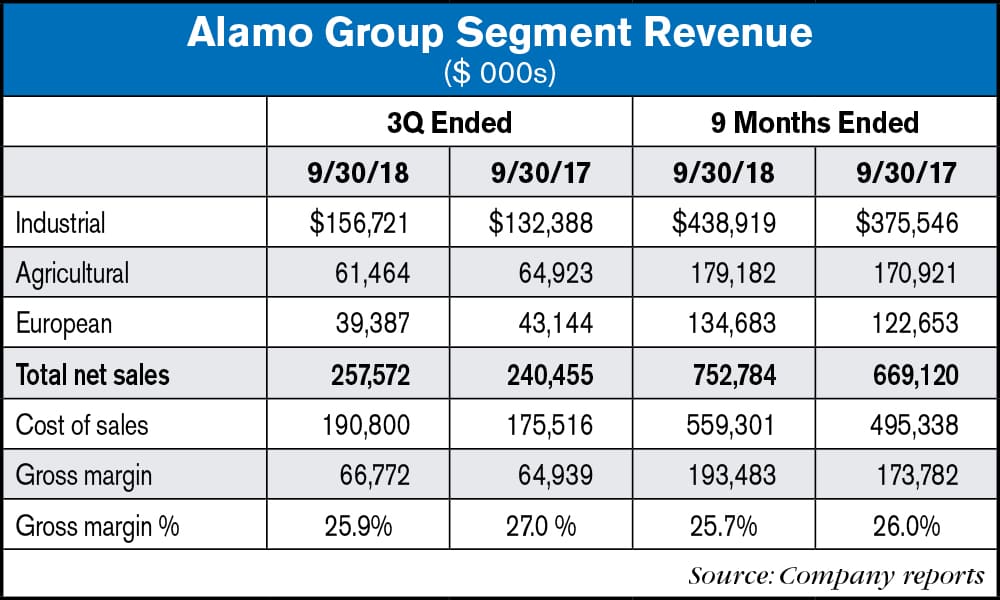 The global tire manufacturer reported net sales for the quarter were $384.7 million, an increase of 3.7% compared to net sales of $371 million for the same time period in 2017. Net sales increased nearly 10% on a constant currency basis.

Paul Reitz, president and chief executive officer of Titan, says he expects strong performances in the future, given the upward trend of ag machinery sales. He says optimism for 2019 comes from early orders and aging equipment fleets.

“In North America, sales of large to mid-sized ag machinery have seen a mild upturn over the past year, and small equipment sales have maintained a strong, upward trend,” says Reitz. “Generally speaking, dealers are optimistic about prospects for improving both new and used equipment revenues moving into next year.”