Highlights for the Quarter & 9 Months

Regarding the ag division’s performance during the period, Ron Robinson, Alamo Group’s president and chief executive officer, commented, “We are concerned about the agricultural outlook which had been showing signs of strengthening, but now is faced with a backdrop of declining farm incomes and the impact that new tariffs are having on demand for certain agricultural commodities. Our Agricultural Division results, while off, are still good, primarily due to improvements in our operational efficiencies which helped mitigate the impact of higher input costs and lower sales.”

Robins added, “All in all, despite the various challenges, Alamo had a very good third quarter and 2018 is developing at a record pace. We believe some of the issues we are facing are unlikely to be resolved in the short term, such as the weakening agricultural market, but feel we are benefiting from an overall economy that is reasonably solid, as evidenced by the performance in our Industrial sector. And while tariffs and other cost increases have affected our results, in general, we feel we have been able to pass along some of these increases and should be able to maintain our margins through aggressive cost control measures.” 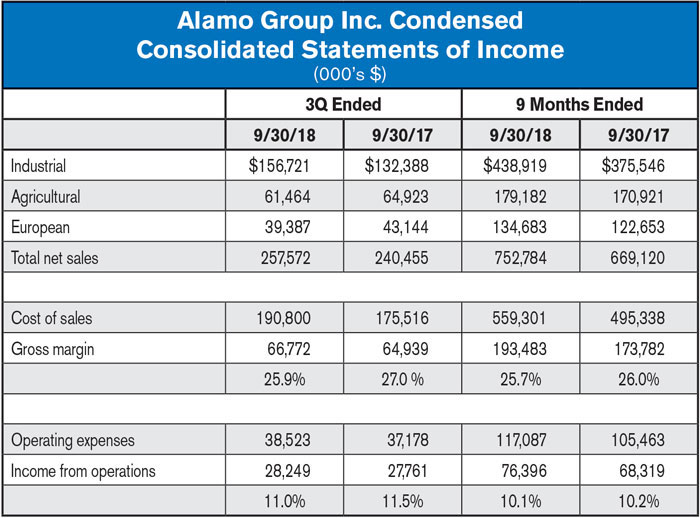