As of August 10, the National Agricultural Statistical Service forecast U.S. 2012-13 corn yields 22.6 bushels per acre lower at 123.4 bushels, compared with last month's forecast of 146 bushels. While opinions vary on the impact the drought will have on farm equipment sales for the rest of this year and next, most analysts agree the lower yields will result in higher commodity prices. This combined with the wider use of crop insurance is likely to blunt a major falloff in ag machinery sales in 2013.

As forecast, the 2012-13 corn yield would be the lowest since 1995-96. The yield reduction, combined with a decrease of 1.5 million in expected harvested acres, results in a crop of 10,779 million bushels, which is 2,191 million bushels lower than July's projection and 1,580 million below last season.

This forecast would result in the lowest production since 2006-07. Unusually high temperatures and well below average precipitation across much of the Corn Belt in July sharply reduced yield prospects, despite the early planted crop. As of August 5, only 23% of the corn crop was rated in good-to-excellent condition in the 18 major corn-producing states, down 37 percentage points from a year ago. Fifty percent of the crop was in the very poor-to-poor range, compared with 48% the previous week and 16% at this point last season. 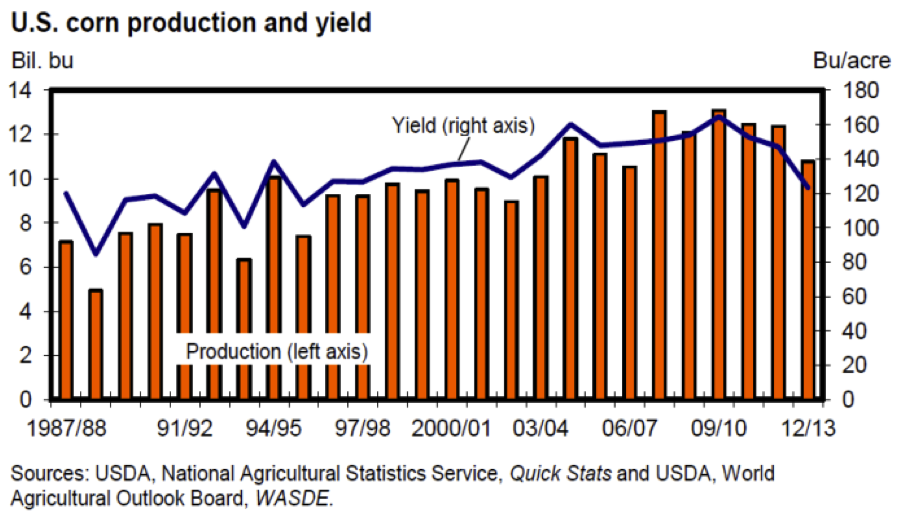