Agricultural productivity growth depends on continued investments in research and development (R&D) by the private sector as well as by public institutions. Among agricultural input industries, research intensity, or research spending as a percentage of market sales, varies widely. For example, in 2009, the farm machinery sector invested only about 4% of sales in R&D. 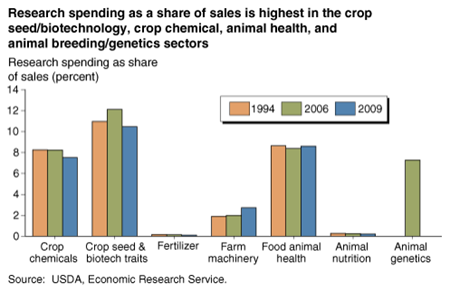 The most R&D-intensive sector was crop seed/biotechnology. In this sector, R&D intensity was particularly high in the late 1990s and early 2000s when many new GM crop varieties were being commercialized.

Several factors account for variations in research intensity across agricultural input sectors and over time. In addition to market size and growth, these include opportunities provided by scientific advances to develop new technology; the ability of developers to capture economic gains from intellectual property; rising (or falling) availability of agricultural resources; the cost of science and technology inputs used in research; and the regulatory costs of commercializing new technologies. As a result, even though the markets for fertilizer and animal nutrition are relatively large, profit margins are low and manufacturers lack incentives to invest much in research and innovation in these products.

This chart is found in the June 2012 issue of Amber Waves magazine, published by USDA’s Economic Research Service.