Under 40 Horsepower Tractors — This category is following the strong upward trajectory of the U.S. general economy as Lifestyle Farmers are gaining confidence in their future and publishing that new found strength in purchases. 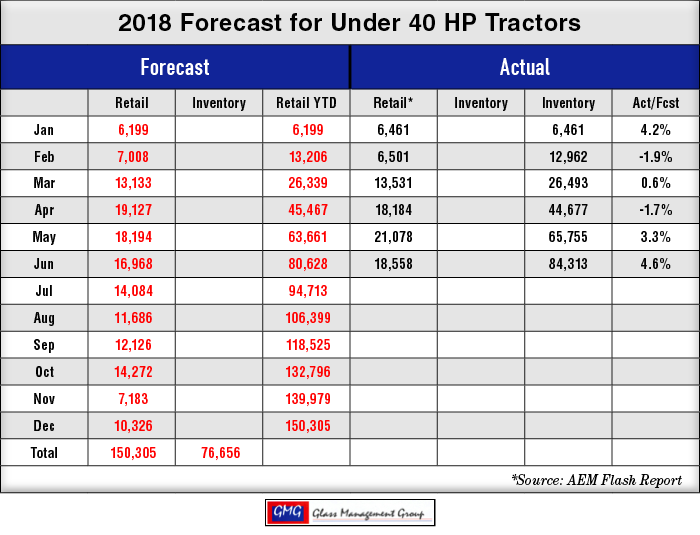 40 to 99 Horsepower Tractors — While there is a significant influence from Lifestyle Farmers in the 40 – 60 HP range of this category, there is also some inherent strength in the production farmer’s purchases this year as this category continues to rise. 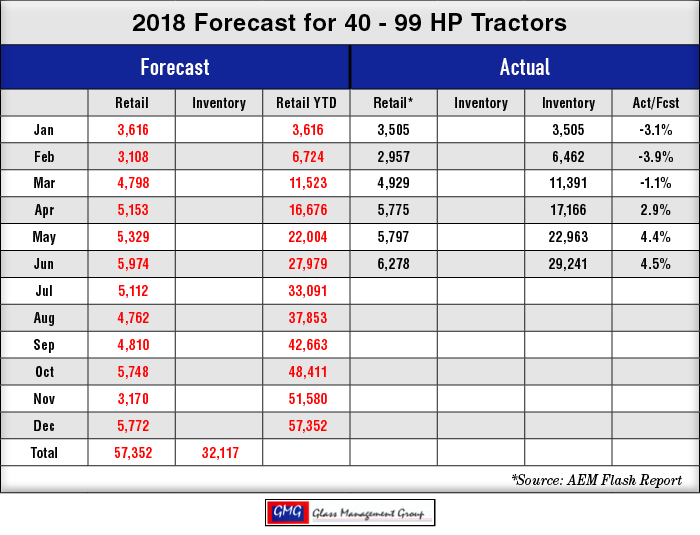 100 + Horsepower Tractors — Our original forecast for this category represented a -3% decline in total sales this year as compared to 2017 results.  Even though this category started slowly it has now reached our mid-year forecast level and could surpass our forecast by year end. 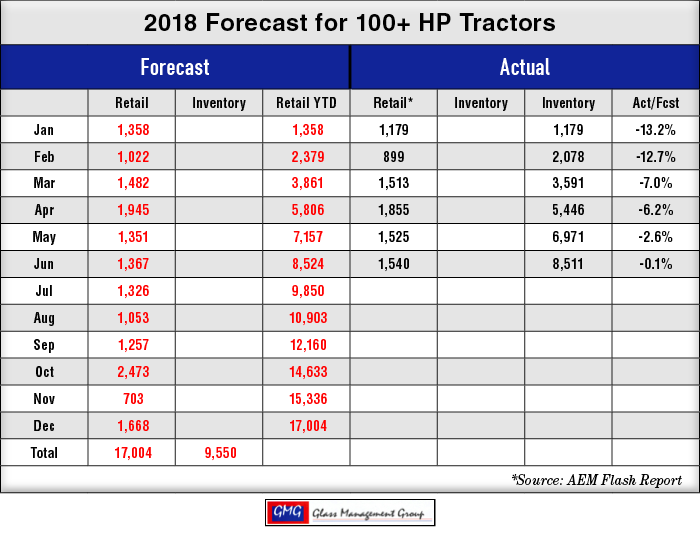 4 WD Tractors – Our original forecast for this category was a -6% decline from 2017 levels.  Sales were weak in the first quarter but have rallied back in the second quarter to within -2.5% of that original forecast. 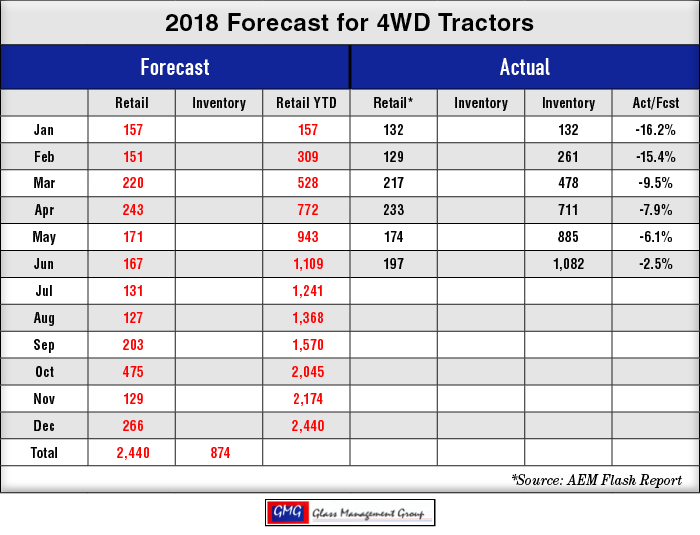 Combines — Combines had another very good month and still is considerably above our original forecast, even though the difference declined slightly in June. 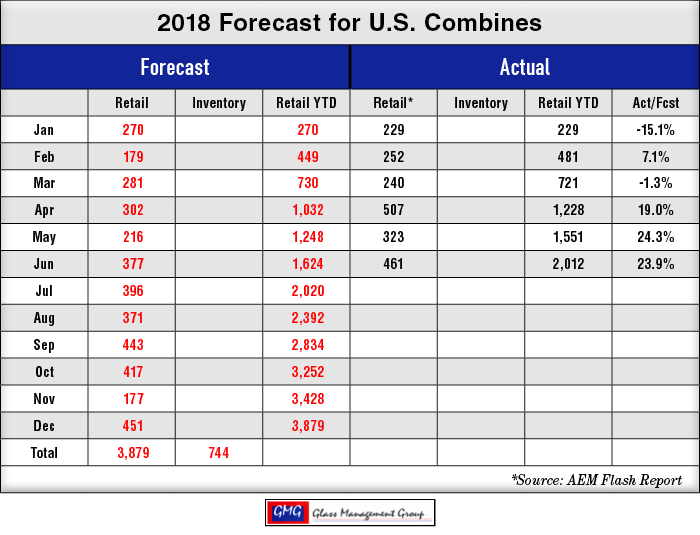 “The Art of the Deal” said one must endure some short term pain in order to achieve the ultimate long term gain.

The reality of the negative effect of tariffs is now apparent across the U.S. agricultural economy. It has now been two months since China has purchased any U.S. soybeans and prices on the CME have fallen to levels that are approaching the break-even point for many soybean farmers.

The black clouds on the horizon are allowing some sunshine to peek through as the E.U. has increased their purchases and are now the largest purchaser of U.S. soybeans.  Lower prices has enticed many new purchasers of U.S. stocks as soybean prices in Brazil continue to sell at a premium of nearly $1.50 per bushel above the CME price.  China is now paying a premium price for their grains while U.S. farmers are realizing even lower net farm incomes as the result of these trade negotiations.

Meanwhile, the U.S. general economy continues to move along rather briskly and that is ultimately a good sign for the future agricultural economy.  The Prime Minister of Quebec, Canada’s milk producing province, recently suggested that the national government rethink their milk tariff on U.S. products.  Canada’s agriculture department is controlling domestic milk production to match supply with demand through an allotment system and the tariff on U.S. milk is simply one element of that plan.

The U.S. Department of Agriculture is currently devising a plan that will assist farmers during this period of low farm income but that plan has yet to be unveiled.  In order for it to be helpful it must include some financial assistance for those farmers affected by the current tariff tiff.

The domestic demand for ethanol has been increasing lately and that will relate to additional bushels of corn required to produce that increase.  While this may not move the needle on corn prices in Chicago, it will have a positive effect on the current corn inventory and produce some income for corn farmers.

The efforts to renegotiate the North American Free Trade Agreement (NAFTA) appears to be moving at a snail’s pace but some progress is being made.  Even though NAFTA did not produce true “free trade”, it was a very positive agreement for U.S. agricultural producers.  As Brazil’s soybean prices remain high Mexico continued their purchasing of U. S. soybeans in June and appears to remain a major trading partner in the future.

These tariff tussles have certainly stirred up a lot of dust but their long term effects are unknown at this time.  Meanwhile, our models continue to show that 2018 will be a base building year and points to increased equipment sales in 2019 and beyond.  Prolonged tariff activities certainly could depress the equipment sales in the near future but indications now are that the slow moving upward trend will continue into 2019/2020.

Commodity prices fell across the board in June and that will have a negative effect upon net farm income for 2018.  While prices remained relatively flat during May, June saw a tumble of more than 10% in future prices at the CME.  China’s absence certainly came to the forefront of trading activity this month.

Soybeans — The soybean markets suffered a larger decline with the July contract closing down about $1.60 per bushel at $8.58.  The August contract fell to $8.63 while the September contract closed at $8.69 per bushel.

The unknown resulting from the current trade negotiations have had a major impact on the positive feelings that existed just a few months ago. Farmers and ranchers are facing reduced incomes coupled with rising interest rates for their necessary operating capital and that does not produce a bright, cheery outlook.  However, things are not quite as dismal as they may have appeared in June and equipment sales for the U.S. will continue to plug along until all of this uncertainty is a distant memory.  Presidential actions have produced negative markets for farmers in the past but those conditions did not last forever and American agricultural producers not only survived but they excelled in the years that followed.