In today's newscast we talk with Rocky Mountain Equipment president Garret Ganden about the dealership's ambitious growth plan. We also take a look at precision farming dealers' outlook for the year and the results from the June Ag Economy Barometer. We also caught up with Curt Blades, senior vice president of of agriculture for the Assn. of Equipment Manufacturers about the first 6 months of 2018 and his outlook for the second half of the year, as well as 3 trends to watch that will have a significant impact on agriculture in the near future.

Rocky Mountain Equipment, calls itself “Canada's largest agriculture equipment dealer and the largest Case IH dealer in North America.” During its investors’ meeting in late May, the dealership group announced an ambitious plan to grow its revenues by $500 million by 2023. It’s 2017 revenues were $960 million. 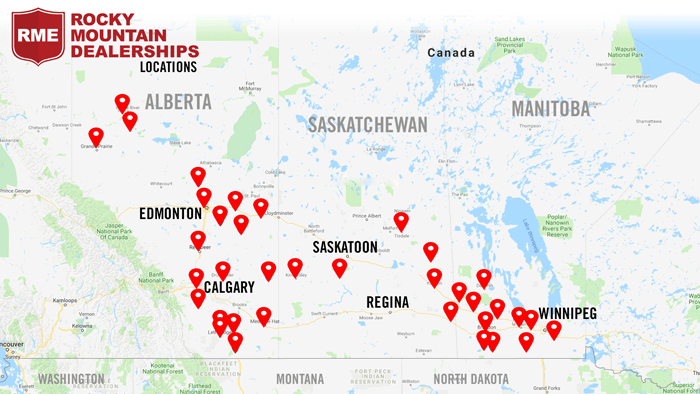 In addition to organic growth, RMEs plan to increase revenue also includes acquisitions in its current footprint that covers much of Alberta, Saskatchewan and Manitoba, and could include acquisitions in the Western U.S. RME says a U.S. acquisition would be “transformational” for the dealer group. Such a move would help it mitigate a number of risks including currency, crop, weather, political, transportation and tariffs through risk diversification.

Ag Equipment Intelligence caught up with Garrett Ganden, RME’s president and CEO, last week to discuss the possibility of the dealership group’s expansion into the U.S. He said any U.S. acquisition would need to meet certain criteria that includes:

With the announcement of a definitive agreement to acquire the two locations of John Bob Farm Equipment in Saskatchewan, RME currently operates 36 store locations.

New Holland dealer Wichita Tractor has purchased the retail division of Price Brothers Equipment, adding the full line of Kubota equipment to its store in Wichita.

Claas dealer Alberta Ag Centre is opening a new location in High River, Alta. The new location allows the dealership to reach customers in Calgary all the way to the U.S. boarder.

John Deere dealer AgriVision Equipment has acquired Pender Implement. The transition is expected to be completed by late August. This brings AgriVision’s locations to 17. In the last episode of On the Record, we reported that AgriVision had acquired Van Wall Equipment’s store in Onawa, Iowa.

Sydenstricker Implement, a John Deere dealer based in Mexico, Mo., is acquiring the assets and operations of J.F. Roling & Sons in Salisbury, Mo. This brings the dealership’s total locations to 12.

AGCO and Kubota dealer Terry Implement opened a second location in Chillicothe, Mo., that will be dedicated to selling Kubota equipment.

If the ag industry has taught precision farming dealers anything during the last few years, it’s that no longer can they rely on singular sales of hardware and expect to grow business.

For some, this has been a hard lesson learned. But the evolving market has allowed adaptable dealers to capitalize on changing technology priorities among their farm customers. 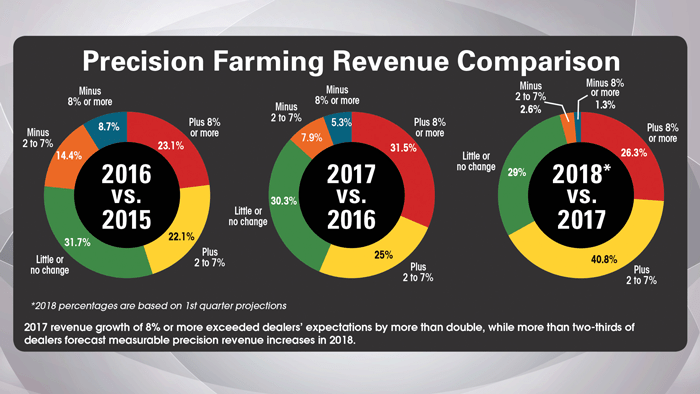 Based on the responses gathered during the first quarter of 2018 from 29 different states and Canada, about 31% of dealers reported precision revenue growth of 8% or more in 2017, more than double the 15% forecast in last year’s report.

This marks the second consecutive year dealers exceeded their higher-end revenue expectations by more than double. Last year, 23% of dealers reported 2016 precision revenue growth of 8% or more, more than doubling the 10% forecast from the 2015 report.

However, dealers fell short of more modest revenue projections in 2017. Some 44% forecasted growth of 2-7% in last year’s report, but 2018 data shows that only 25% achieved that goal.

Still, revenue declines are less significant than in 2016, when 23% reported a dip of at least 2%, including about 8% that saw a decline of 8% or more.

Further analysis of 2017 revenues shows that 30% of farm equipment dealers — which account for nearly three-quarters of survey respondents — reported precision growth of 8% or more, doubling projections. However, only 23% reported revenue growth of 2-7%, well below the 2017 forecast of 45%.

So what are dealers expecting this year? Overall, about two-thirds forecast revenue growth of at least 2% over 2017, with about one-quarter projecting growth of at least 8% — the highest total since the study began tracking revenue outlooks 4 years ago.

Only about 4% of respondents project revenue declines of at least 2%, a record low. Some 29% expect precision revenues to remain flat in 2018, consistent with the 2017 forecast.

Optimism for 2018 is highest among farm equipment dealers, with nearly 70% projecting precision growth of at least 2% and only 3% project a measurable decline in precision revenue.

Half of Producers Making Replacement Investments

Fewer agricultural producers are saying now is a bad time to make large farm investments, such as the purchase of new equipment, according to Purdue University and CME Group’s June Ag Economy Barometer survey. 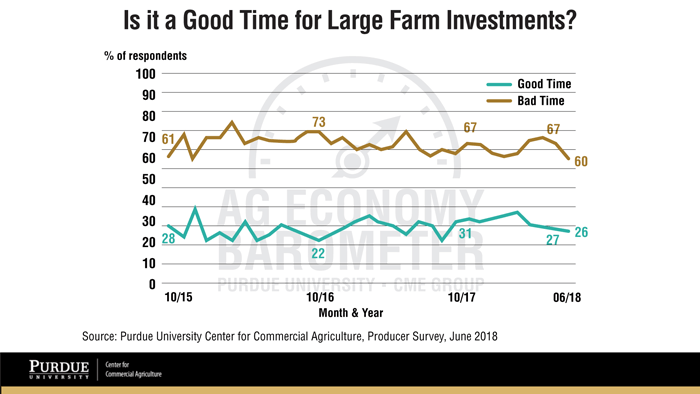 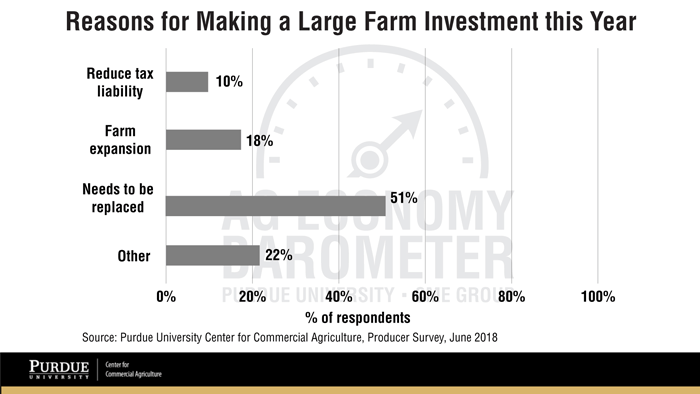 Of those surveyed, 13% indicated they actually plan to make a large purchase on their farm in 2018. Of those respondents, 51% said they were making the investment because a building or piece of equipment needed replacing.

Earlier this week, the Assn. of Equipment Manufacturers released its monthly ag tractor and combine sales reports for the U.S. and Canada. Through the first 6 months of 2018, total tractor sales in the U.S. were up 6.5% and up 4.7% in Canada compared to the same period last year. Combine sales were likewise trending positive, up 20.5% in the U.S. and up 3.9% in Canada vs. the first 6 months of 2017. 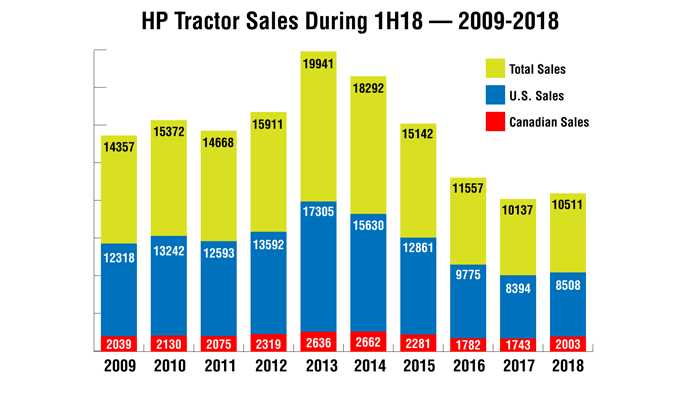 Although sales figures suggest a recovery for the ag equipment industry, things aren’t necessarily positive for agriculture as a whole, at least currently, says Curt Blades, AEM senior vice president of agriculture. Even so, farmers are at the point where their equipment needs replacing and many are also feeling good about what the future holds.

One thing that has AEM officials concerned is the potential for a trade war, which appears to be getting more serious every day. President Donald Trump recently announced the U.S. would enact another $200 billion worth of tariffs on China. This adds to billions worth of tariffs already identified for China, plus separate tariffs on steel and aluminum tariffs and retaliatory tariffs from other nations, which impact U.S. commodities that include soybeans and other ag products.

Blades says the trade concerns will have an impact on what the next 6 months look like when it comes to ag equipment sales.

The next quarter century will see a massive increase in corporate farm ownership as well as the rise of even more technologically sophisticated farm equipment, according to research from the Assn. of Equipment Manufacturers (AEM) and the Context Network.

The report says the following 3 trends will have a significant impact in the near future: Changes in farm ownership structures, fierce competition among precision agriculture makers and the rise of a “new” sort of trusted advisor. 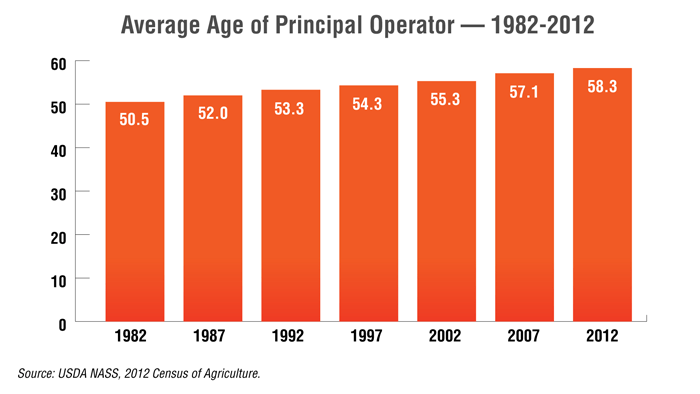 The AEM report contends that farms will become even larger over the next 25 years, due largely to economies of scale. The timing for these changes to occur is undeniable. According to the research, for every farmer under the age of 45 there are more than 2 who are over the age of 65. The average age of farm operators is 58, which is the highest it has ever been.

More than 80% of farm operators surveyed in the report are using yield monitors, GPS and soil sampling technologies. The research also found that farmers look positively on the production gains that come from precision ag, but they desire a single platform that ties together all aspects of their operation. In 2017, investments in agriculture technology reached an estimated $2 billion.

With more industrial-style farms and a growing array of technological advances, growers will have a greater need for advice from a trusted advisor — a “general opportunity” for equipment manufacturers, according to the report.

Ultimately, the role of a “trusted advisor” will be filled by whoever the farmer shares their data with to help them manage and interpret it.

Versatile’s first trans/axial 2000 pull-type combine rolled out of the factory on June 24, 1981. The prototype for the combine had been in the field for 3 years being tested, modified and perfected along the way. But, the first designs for the prototype began as early as 1972. According to the July 1981 Versatile Inside Communicator, “In more ways than one, the building of the combine has been an innovation. Time was short, and the task momentous. A new approach was therefore required, and the idea of a taskforce was born. 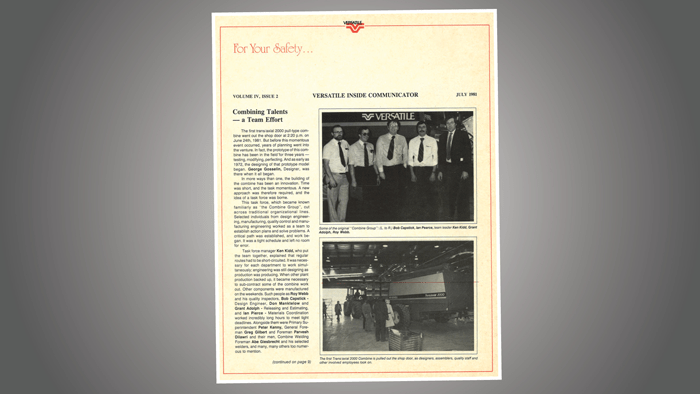 “This task force, which became known familiarly as ‘the Combine Group,’ cut across traditional organizational lines. Selected individuals from design engineering, manufacturing, quality control and manufacturing engineering worked as a team to establish action plans and solve problems. A critical path was established, and work began. It was a tight schedule and left no room for errors.”

[Podcast] Could Rocky Mountain Equipment Make a Move in the U.S.?