In today’s newscast, we explore the possible outcomes of Deere’s lawsuits against Precision Planting and AGCO, how high-speed ISOBUS will expedite plug & play compatibility, Titan Machinery’s first quarter earnings for fiscal year 2019, an improvement in farmer and rancher sentiment and changes to the Financial Accounting Standards Board’s accounting standards for companies that lease equipment.

Deere & Co. filed a lawsuit June 1 against Precision Planting and AGCO claiming the companies infringed on about a dozen John Deere patents related to the ExactEmerge planter.

Deere filed separate complaints against Precision Planting and AGCO, claiming that when you combine the SpeedTube and vSet Classic or vSet 2 seed metering systems that it infringes on the ExactEmerge system, explains ag attorney Todd Janzen.

If the court rules in favor of Deere, Janzen says there are a few potential outcomes.

While AGCO has not commented on the lawsuit, Janzen says it is possible AGCO could file a counterclaim saying ExactEmerge infringes on some of their patents. However, he stresses that is just speculation at this point.

He also says it could be years before the case is settled.

This week’s Dealers on the Move are Koenig Equipment, KanEquip, Hyde Park Equipment and Wagner Equipment.

John Deere dealer Koenig Equipment is acquiring the assets and operations of Cahall Brothers in Amelia, Ohio. The addition brings Koenig's total locations to 15 throughout Ohio and Indiana.

KanEquip has reached an agreement with McConnell Machinery Co. to acquire its Ottawa, Kan., location and Case IH territory. McConnell will keep its Lawrence store location and Kubota territory. The acquisition brings KanEquip’s total locations up to 9 in Kansas and Nebraska.

Kubota dealer Hyde Park Equipment opened a new location in London, Ont., that offers a much larger shop than the old location, in addition to offices and a showroom.

Last month, I traveled to Lincoln, Neb., to cover the Agricultural Electronics Foundation Plugfest event. For hours on end, developers from around the world tested their platforms for compatibility in a round-robin format, hoping to fix any underlying issues en route to eventually achieving ISOBUS certification.

Among the many compatibility veterans in attendance was Dave Smart, staff systems engineer with John Deere and head of AEF’s high-speed ISOBUS development project. In working with AEF since 2001, Smart has contributed to the research and development of ag compatibility, helping develop universal standards to connect machines, implements and data for growers.

Speaking on behalf of his work with AEF and the industry wide goal of universal “plug-&-play” compatibility across all brands, Smart explains the current limitations of CAN-based ISOBUS in the field, and how the eventual implementation of an enhanced, high-speed ISOBUS network will provide unprecedented bandwidth for data collection and brand-to-brand functionality.

“The speed of CAN is very slow, and it's not unlike the dial-up modem from many years ago in the terms of performance. (It’s) no longer adequate in anybody’s home in these modern times, I would say. So the high-speed ISOBUS is intended to give us that next capability from an infrastructure perspective, and even though many of the operations would still be the same sort of thing, we still have the user experience, we still have prescription being applied, data logging and so forth. But now, instead of saying the planter's delivering 32,000 seeds per acre as the set point, and it’s actually 31.5, we could instead have the bandwidth to get down to row level, and what is each row doing? And do I actually have a need to have a prescription that can adjust row-by-row-by-row?”

While acknowledging that the network is still under development, Smart adds that growers will have the ability for camera integration on implements for access to real-time viewing and data collection from the cab. Should it all come together as expected, perhaps we’re a lot closer to true “plug-&-play” than many would be led to believe.

Titan Machinery reported its first quarter revenues for fiscal year 2019 on May 31. For the quarter ending April 30, total revenues were $245.7 million, down 6.9% vs. the same period last year.

Agriculture segment revenues were down 12.7% for the quarter at $142.9 million. A late spring delayed field preparation and planting, negatively impacting revenue, particularly in the parts and service and rental segments, management said. 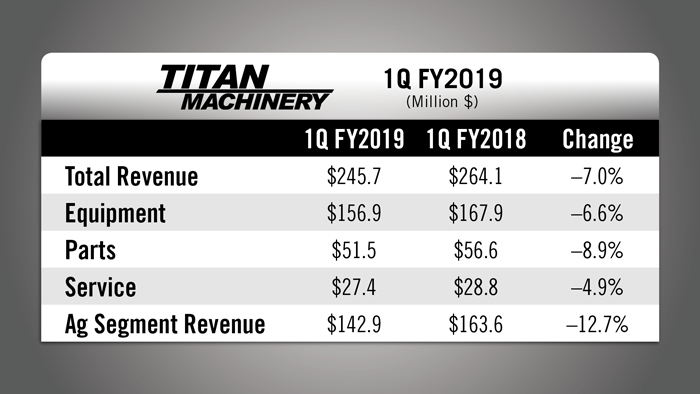 Baird analyst Mig Dobre says, while weather played a role in the slower than anticipated start, management also acknowledge some farmer hesitancy as ever-shifting stances on “trade wars” created a sense of uncertainty.

Dobre says, “Revenue was weak but execution on cost has improved and most importantly, Parts and Service remains a key earnings driver the impact of which is yet to be felt. Weather played a big role here, with both Parts and Service down 9% and 5%, respectively.”

Dobre also points out that this business has now declined for 4 straight years while the fleet has gotten older. He also notes that as planting activity picked up in the second quarter, parts and service demand is up year-over-year with momentum expected to continue as the year progresses.

The May Purdue University/Center for Commercial Agriculture Ag Economy Barometer posted the highest reading since January 2017. The May reading was 141, which is 16 points higher than the April reading. James Mintert and Michael Langemeier who assembled the report say the increase was driven both by producers improved view of current conditions and their more optimistic view of the future. 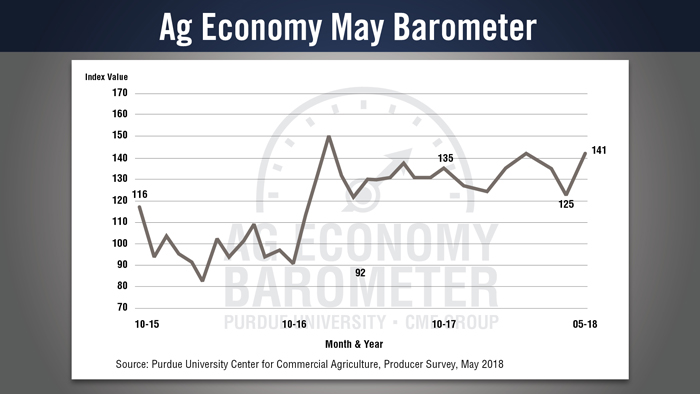 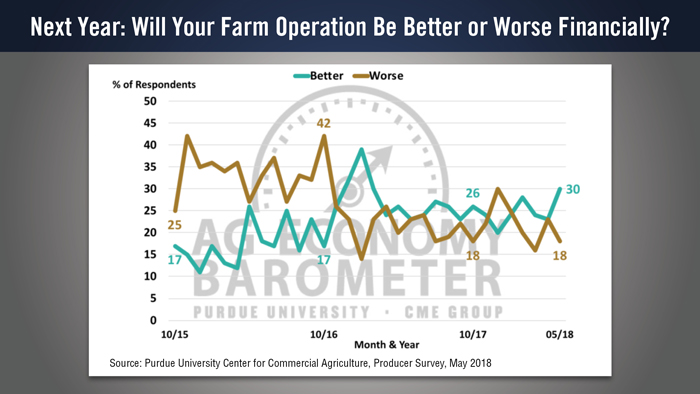 According to Mintert and Langemeier, the improvement in sentiment regarding the U.S. ag economy could be a function of a relaxation in international trade tensions with China compared to a month earlier when nearly one-fifth of respondents expressed concern that U.S. agricultural exports will decline over the next 5 years. 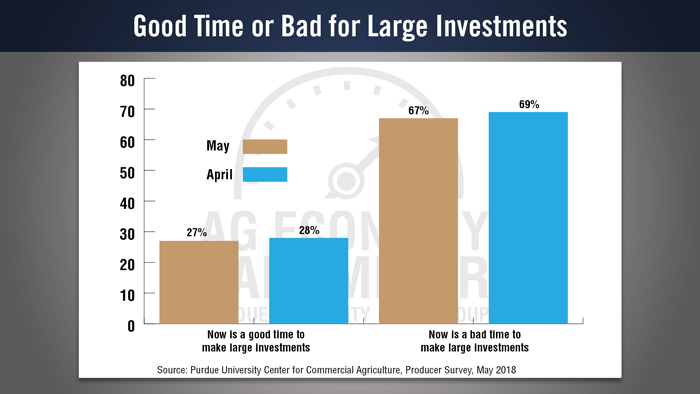 Farm Equipment dealers who lease equipment will soon have to adjust their accounting practices thanks to a new standard that goes into effect next year.

The new accounting standard for leases require both operating and finance leases be included on a company’s balance sheet. The new standard goes into effect on January 1 for companies whose fiscal years end on December 31.

Ralph Petta, president and CEO of Equipment Leasing and Finance Assn., noted last year in Farm Equipment that the new lease accounting changes are “relatively neutral and should not impact the ability of companies to acquire productive equipment to operate and grow their businesses.”

One of the key changes is that leases previously classified as operating leases under current accounting standards will now be capitalized and thus reported on corporate balance sheets. With the changes in balance sheet reporting, some financial statement ratios may be affected.
Under the new standards, operating leases will no longer appear simply as a table of future payments in the footnotes; they will appear as a “right-of-use” asset and an offsetting lease liability on the balance sheet.

A guide to implementing these new accounting practices can be found on the Pine Hill Group website. 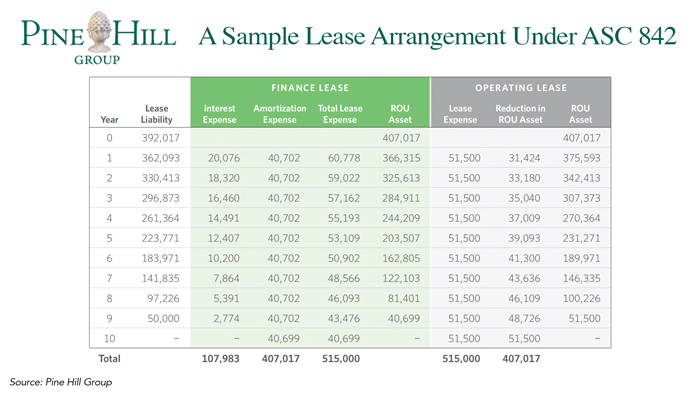 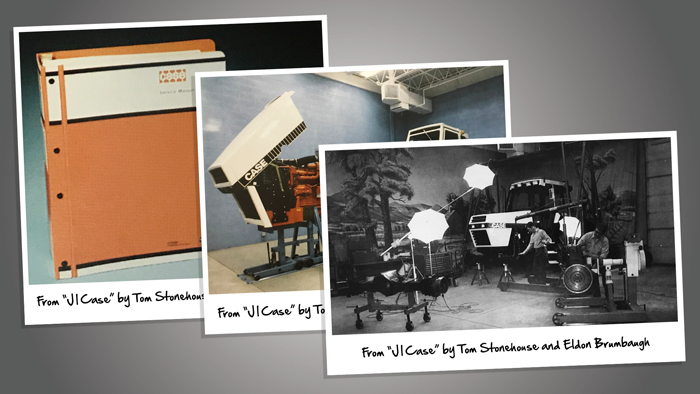 In the 1960s Case built a special prototype tractor that was used to illustrate tractor repair in the Dealer Service Manual. The manual was available when the tractor was introduced to the dealers. Many of the special tools dealers would need to service the product, such as the splitting stands pictured, were developed in the Case Technical Publications photo studio and shop while the Service Manual was being completed. Writers and mechanics worked together to develop the procedures and techniques needed to service a tractor. The procedures were then photographed step-by-step and included in the Service Manual. This eliminated any possible translation errors with language.