In today's newscast, we discuss how a GKN shareholder vote stymied the company's plan to combine its automotive and off-highway drive systems operation with Dana Corp., Titan Machinery's fourth quarter and year-end financial results, a number of legislative updates — including the Supreme Court's ruling that service advisers are exempt from the Fair Labor Standards Act's overtime requirement, and Art's Way's first quarter earnings.

Spader Business Management's team of industry experts provide business insights, ideas and concrete tactics through training and consulting. Generations of business owners and operators have also relied on our 20 Groups to capitalize on new opportunities and industry trends by learning directly from their peers. Learn more at spader.com.

Is the Battle for GKN Over?

It looks like plans to combine the automotive and off-highway drive systems operations of Britain’s GKN engineering group with U.S. manufacturer, Dana Corp., have been stymied by a GKN shareholder vote in favor of a hostile takeover by UK business turnaround specialist Melrose Industries, as reported March 29 on the Farm Equipment website. 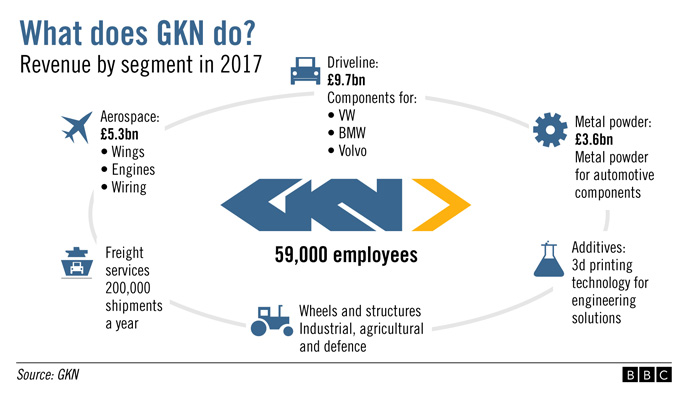 GKN planned to sell its Driveline division, which includes Walterscheid off-highway power drives and linkage systems, as well as other operations considered non-core such as the off-highway wheels businesses. The company manufactures wheels and structural products for several industries, including ag equipment.

According to published reports, Melrose has made no secret of the fact it intends to make GKN more profitable through efficiencies before selling it off.

52% of GKN shareholders voted to accept the Melrose $11 billion offer rather than accept management’s proposed deal with Dana. It has been suggested that hedge fund investors bought shares of GKN when Melrose first suggested the takeover in hopes of turning over large short-term gains.

Now, resistance to the takeover is coming from both sides of the political aisle as Britain’s Labour party has called Melrose a “short-termist asset-stripper.” Conservative Lucy Allan, added “These investors, or vulture funds, came on to the GKN share register for a matter of weeks in order to make a quick and significant profit.”
Because GKN supplies parts to the military, the British government may be looking into the takeover to determine its impact on the country’s national security interests.

Koenig Equipment, a John Deere dealer based in Botkins, Ohio, is acquiring the assets and operations of Buchanan Power Equipment Inc. With the addition of the Buchanan location in Lebanon, Ohio, Koenig will now have 14 stores in southwestern Ohio and southeastern Indiana.

New York Case IH dealer Salem Farm Supply has signed a letter of intent to acquire the assets of Columbia Tractor, a Kubota and Case IH dealership located in Claverack, N.Y. The acquisition is expected to close June of 2018.

Last week in Valley City, N.D., John Deere showcased their largest version of the 1895 No-Till Drill to date with a 60-foot model.

Offered in addition to the release of the drill is the RelativeFlow Blockage Monitoring system, designed to monitor each primary tower and secondary hose on the drill for seeding blockages, and alert users of any particular issues from the cab before they occur. 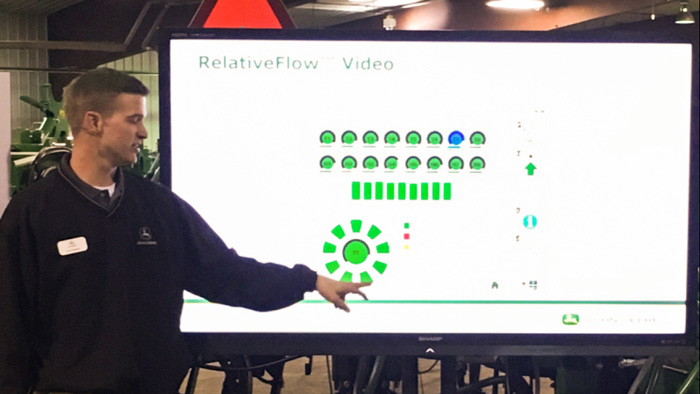 The technology reflects an ongoing trend among manufacturers to provide growers with immediate alerts, via connective monitors, on seeding performance while also expediting the maintenance process on hoses or openers in the field.

As described by product manager Tyler Rumbold, the Relative-Flow in-cab monitor reacts to sensors on each hose with a color coded system where green represents standard flow, yellow indicates a rate issue and red shows a full blockage.

“You’re able to monitor tower one relative to tower seven, so now we’re just showing flow across the whole drill, relative to each tower, rather than just looking at one tower individually. Then we can blow up a tower and look at each of the secondaries in relation to each other.”

Prior to in-cab notification technology, farmers often only discovered blockages after entire pass was already completed. With a growing expectation for instantaneous data on equipment, these types of features could very well become the standard as opposed to cutting-edge.

Titan Machinery, Case IH’s largest dealership group, reported its fourth quarter results on March 29. For the quarter, the dealership reported revenues were up by 6.9% to $339.6 million vs. the same period last year. 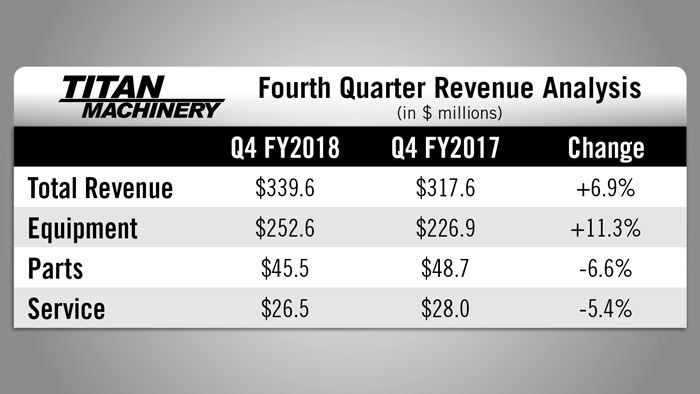 Equipment revenues grew by 11.3% to $252.6 million vs. the fourth quarter of 2017. Parts revenues were down 6.6% and service revenue fell as well, down 5.4%. CFO Mark Kalvoda says the drops in parts and service revenue is related to Titan’s store closings associated with its fiscal 2018 restructuring plan. However, the dealership group’s absorption rate in the fourth quarter improved by 2.4% to 72.4% due to a reduction in fixed operating costs and lower floorplan interest expense, Kalvoda says. 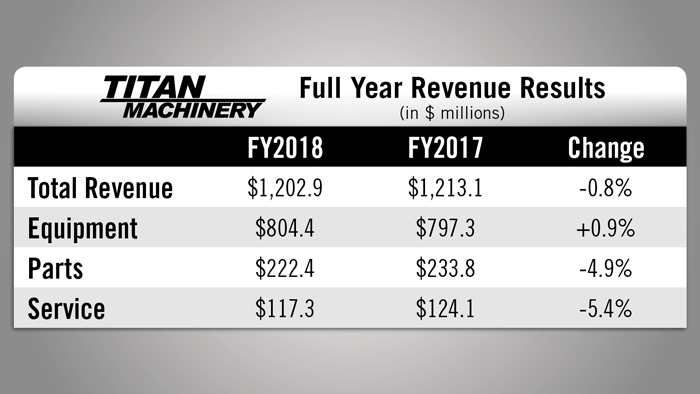 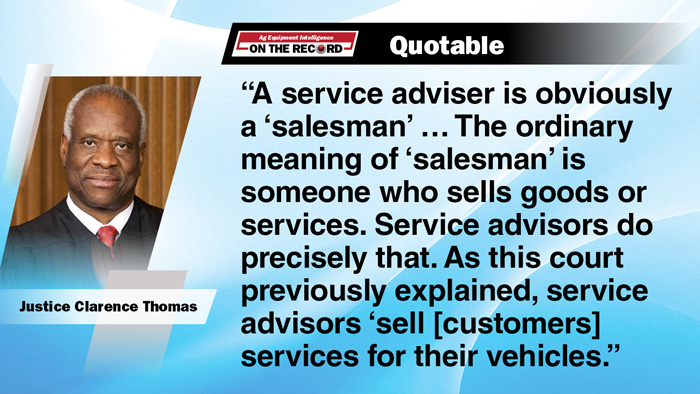 The court’s latest ruling on the issue stems from a 2012 case in which current and former service advisers sued a California car dealership, asserting that they were non-exempt and entitled to overtime.

In other legislative news, in Idaho House Bill 526 passed both chambers in the state legislature unanimously. The bill was delivered to Governor Butch Otter on March 16. The bill became law because the governor failed to veto or sign it within the stated 5-day window.

The bill amends Idaho dealer statutes that prohibit manufacturers from substantially changing a dealer’s competitive circumstances as it relates to a dealer’s ability to compete with another dealer that sells the same brand of equipment. In other words, it prohibits a manufacturer from placing a dealership in an existing dealer’s area of responsibility if they carry the same line of equipment. The prohibition on such conduct would be enforceable even if the contract between a dealer and manufacturer states otherwise.

The Oklahoma state legislature has killed a Right to Repair bill. According to the Western Equipment Dealers Assn., dealer engagement ultimately made the difference in defeating this bill. The association says dealers need to continue that engagement during the interim and impress upon elected officials what their legislative priorities are, including stopping future Right to Repair bills.

Art’s Way, a manufacturer of specialty farm equipment, reported it’s first quarter results March 29. Total revenues for the quarter improved by 21%. The company says an increase in revenue was largely due to increased demand for its ag products. 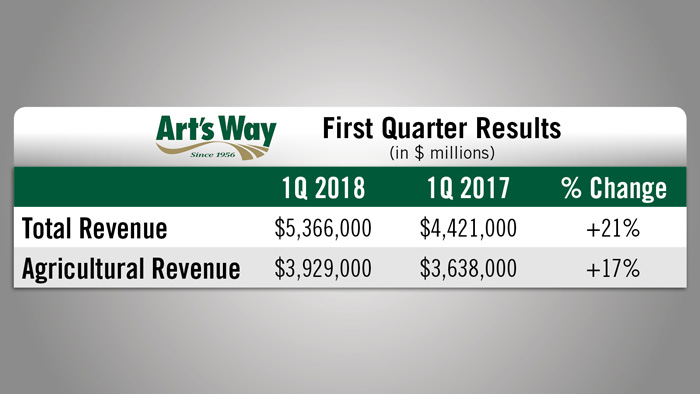 Agricultural product revenues for the quarter were $3.9 million, up 16.7% vs. the same period last year.

During World War II, farm tractors were scarce and new tractors were unavailable, but Jeeps were plentiful. As a result, USDA’s Tillage Machinery Laboratory in Auburn, Ala., began testing Jeeps to see if they could be used as tractors. 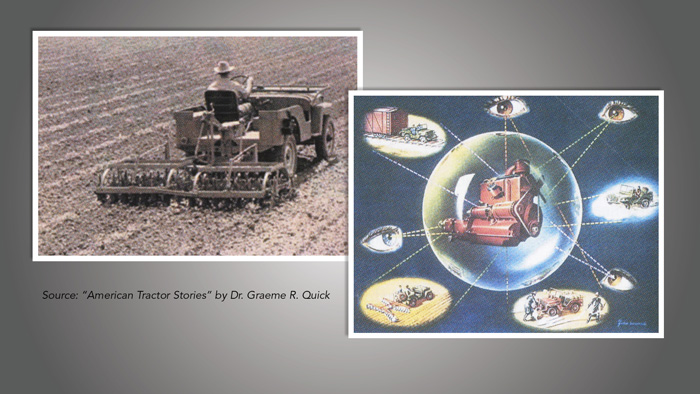 In August 1943, Popular Science magazine sponsored a contest that offered cash prizes for the best ideas on peacetime jobs for Jeeps. They received nearly 1,200 entries, many of which involved farming.

In his book, “American Tractor Stories,” Dr. Graeme R. Quick, an engineering consultant from Australia, said, “Even before the end of the War, Willys, manufacturer of the Jeep, worked diligently to ensure a market for postwar Jeep sales. In 1944, the company billed the Jeep as a tractor that could also be used as a utility vehicle.

This facsimile of an ad that appeared in the June 24, 1944 edition of the Saturday Evening Post illustrated several uses for the Jeep, including disc harrowing on a farm.

Biggest Dealers are Getting Bigger

Are Electric Ag Vehicles Far Off?

In this episode, we dig into some of the results of survey Ag Equipment Intelligence conducted Nov. 15-17 on farmers year-end tax plans and dealers' forecasts for December revenues. Also in the episode: After 5 weeks the Deere-UAW strike has come to an end and Buhler, manufacturer of the Versatile and Farm King brands of equipment, reports its fourth quarter revenues dropped. In the Technology Corner, Michalea Paukner looks at the timeline of how autonomous ag equipment has progressed.
View More