The 100th episode of Ag Equipment Intelligence’s On the Record is now live!

In today’s newscast, we discuss the positive shift in large ag equipment sales the U.S. saw as 2017 came to a close, the recent Precision Farming Dealer Summit, and how farmers will need to evolve in response to the challenging ag market, Deere’s 2017 annual report. We also mark the 100th episode of On the Record with a look back of the top 10 episodes over the last 3 years

Large ag equipment unit sales finished off 2017 with most categories showing growth, according to the Assn. of Equipment Manufacturer’s December sales report. In fact, Curt Blades, AEM’s senior vice president for Ag Services, says he was “pretty thrilled” with how the year ended.

“I was pretty pleased with the December report. Really, if you look back to the June report, compared from June to December … that was when the turnaround sort of happened. And even more so beginning with the July report. Where we saw this stopping of the decline of the over 40 and the over 100 horsepower and the 4WD tractor market. We had seen some consistent year-over-year, month-over-month decline in those markets. And so, it was really nice to see that those declines were really starting to wane a little bit …”

While the over 100 horsepower category ended the year at down 8.1%, some significant ground was gained. A year ago, sales in this category were down by nearly 22%. And as late in the year as September, 100 horsepower tractors were sitting at down 16.4% year-to-date. Blades says “all in all, it’s a mixed bag but it seems as if the bottom maybe has been found.”

Blades says we started to see a bit of a recovery in large ag equipment sales 6 months ago and that has continued in recent months. Just enough, he says, that there is a little bit of optimism and says a replacement cycle is in place.

“But also knowing full well that the economics don't necessarily point to it being a very strong recovery. I think what it does point to is that we're in a bit of a replacement market. Now, there's all kinds of things that could come into play there. Any Black Swan event, or some major weather event somewhere else around the world, or manned event, that could always change everything. But having said that, just normal markets the way we expect them to be, we kind of expect farm income to hold steady, maybe increase just a little bit, and that kind of leads to tractors continuing to sell as they make sense, and certainly in the replacement market.”

Blades adds that Canada has been the leading indicator for the turnaround, and says Canada started to recover about 3-6 months ahead of the U.S.

This week’s Dealers on the Move include Wickham Tractor, Wright Implement and RDO Equipment.

John Deere dealer Wright Implement has moved to a new, larger location in Bowling Green, Ky., The new 30,000 square foot facility is situated on a 12 acre site. The dealership has 9 locations in Kentucky and Indiana.

RDO Equipment, will acquire Evergreen Implement based out of Othello, Wash. The acquisition adds 5 locations in Washington. The John Deere dealer operates 75 stores in 10 states.

Having returned from the third Precision Farming Dealer Summit last week in Louisville, I’ve had an opportunity to reflect on a few of the highlights.

The sold-out conference drew more than 170 attendees including representatives from more than 70 dealerships throughout 26 states, along with Australia, Canada and South Africa. With a theme of Bridging the Precision Profitability Gap, the event featured conversations on how to incorporate agronomic offerings for profit, reinforcing the return on investment approach to selling services and leveraging long-term trust of customers for recurring revenue.

One of the most talked-about sessions looked at prioritizing the people side of a precision business. Precision recruiter T.J. Stauffer emphasized the value of developing an internal pipeline of talent, something he called a “You University” to prevent knowledge gaps in service and support.

“Training is something we continue to fail at because we don’t realize that becoming a precision farming specialist takes time. It takes an average of about 3 years on the job before a precision farming specialist is going to become what I consider, pretty competent. It takes about 5 years before then start attaining Jedi status. And anyone who has been here longer than 5 years, is a demigod in the precision farming world. The problem is we don’t have many people who make it to the 2 year mark. Those who make it to the 5 year mark or the 6 year mark, their talent is irreplaceable. Their knowledge and experience is irreplaceable. If you think you are going to replace a 5 year veteran with a new hire, it is not going to happen. It will never happen. So that’s the ultimate answer to that question. How do you replace a million dollar earner that walks away from your organization? You can’t. You can’t do it. All you can do is make sure you have a company and you’ve created an organization where you have your own internal pipeline of developing, mentoring and training so when one steps out, there’s another one ready to step in.”

The State of North Dakota is appealing a federal judge’s Dec. 14 ruling that prevented the state from implementing its “Farm Equipment Dealer Bill of Rights” law. In late July 2017, the Assn. of Equipment Manufacturers, AGCO, CNH Industrial, Deere & Co. and Kubota filled suit to block the law, which took effect Aug. 1.

In a note to North Dakota Implement Dealers Assn. members, president and CEO Matthew Larsgaard said, “Perhaps most troubling is that the order thwarts the clear will of the North Dakota Legislature, governor and agricultural community. Instead, the Order classifies SB 2289 as special interest legislation that does not benefit the state’s agricultural economy.”

Evolving in the Ag Market

Ken Zuckerberg, senior analyst, farm inputs, with Rabobank delivered the keynote presentation at the Precision Farming Dealer Summit in Louisville on Jan. 8. During his talk, he said Rabobank is forecasting a challenging ag environment through 2022.

Low commodity prices are now the “new normal” as Zuckerberg put it and Rabobank expects a median U.S. corn price of $3.60-3.80 per bushel between 2018 and 2024. The bank also expects an extended period of low growth and low returns.

“We have determined that the way the current farm economy is structured, that for the average Midwest crop farmer there’s good news and bad news. The good news is that commodity prices seem to have bottomed, or at least we’ve probably seen the worst we’re going to see. The bad news is that there’s a 75% probability that corn prices are probably going to top out at $4.20 over the next 5 years.”

He also adds that the average Midwest farmer will have just 4-5% operating margin on average over the next 5 years.

Another challenge he pointed to was the change from the food industry “pushing” products to buyers now “pulling,” pointing to preferences for organic and non-GMO products and premiums being paid for local, fair-trade and sustainably sourced grains.

In the face of these challenges, Zuckerberg says farmers are going to need to evolve to ensure economic resilience. He points to four options for growers — horizontal integration, contract farming, vertical integration and adopting technology.

A last option would be to sell, close down the farm or temporarily exit farming. However he says the decision to pursue such a strategy is complicated and might be considered as a last resort if there are few or no options for growing, stabilizing, or diversifying the farming business.

Deere & Co released its Annual Report on Jan. 12. According to the manufacturer, its Ag & Turf division saw solid improvement thanks to improving market conditions. Operating profit grew by 46% in 2017 to $2.48 billion with a 9% increase in sales.

Despite low commodity prices, sales improved for both large and small ag products. The biggest gains came in South America. 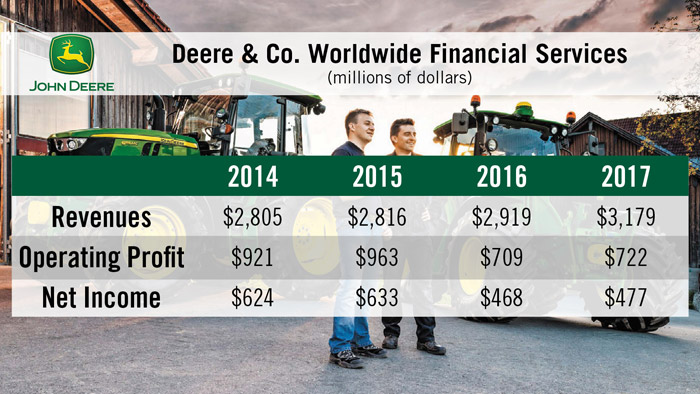 In 2017, Deere’s revenues from its financial services division were about $3.2 billion with net income of $477 million. This compares to revenue of about $2.8 billion in 2014. However, net income was higher in 2014 at $624 million, likely indicating lower interest rates or ???

Deere’s loan and lease portfolio also grew by 5%, exceeding $40 billion for the year.

Deere also recently released its December 2017 Retail Sales report. For the month of December, industry sales of high horsepower tractors were down 4%, while Deere was down more than the industry average. For the month, industry sales for 4WD tractors were up 27%, with Deere’s sales being up more than the average. Deere also beat the industry average of up 2% for combine unit sales in December. 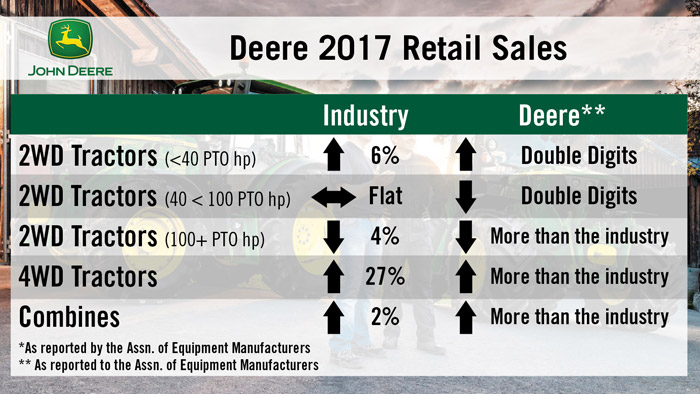 And now from the Implement & Tractor Archives …

Implement & Tractor Archives — Looking Back at the First 100 Episodes

This is the 100th episode of On the Record. To celebrate this, we decided to take a look back in the archives to see which episodes made the biggest waves with viewers.

A topic that clearly struck a chord was all the news surrounding the acquisition of Precision Planting — first by John Deere and then ultimately by AGCO in 2017. We first reported the news that Deere agreed to buy Precision Planting from The Climate Corp. back in November of 2015. Three of the top 10 episodes centered around the issue and aired on Nov. 6, 2015, Sept. 6. 2016 and July 28, 2017.

Case IH also made the list, with our No. 1 episode “Case IH Makes Push for Dealer Purity” and then again at number 9 on the list with “CNH Presents New Contract to Dealer Network.” This episode aired on Feb. 21, 2014.

Rounding out the rest of the top 10 were episodes about Kubota’s acquisition of Great Plains, Hagie’s joint venture with John Deere, Versatile putting rumors it was for sale to rest, the softening of the ag market and the water crisis in California.

We hope these last 100 episodes have been informative for you and we’re looking forward to the next 100.