On the Record: Could La Nina Kick Start Ag Markets?

In today’s newscast, we discuss the improvement in North American dealers forecast for 2018, the best precision bets for 2018, the probability that La Niña could kick start the ag markets, and improved sales for Buhler, Claas and Krone.

Based on the responses to Ag Equipment Intelligence’s most recent Dealer Sentiments & Business Condition Update survey, North American farm equipment dealers are more optimistic about their business prospects than they were a year ago.

Overall, a net 40% expect improved sales in 2018 and are forecasting a 2% increase in sales for the year. Last year at this time, dealers were expecting a 4% drop off in sales for 2017. 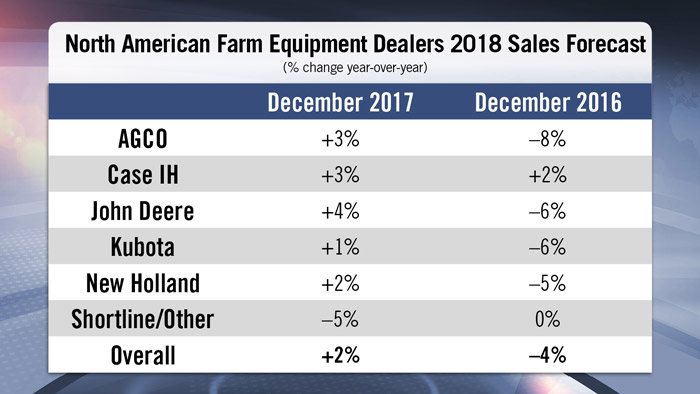 John Deere dealers are the post optimistic, projecting a 4% sales increase in the year ahead, while AGCO and Case IH dealers expect sales to improve by 3%. 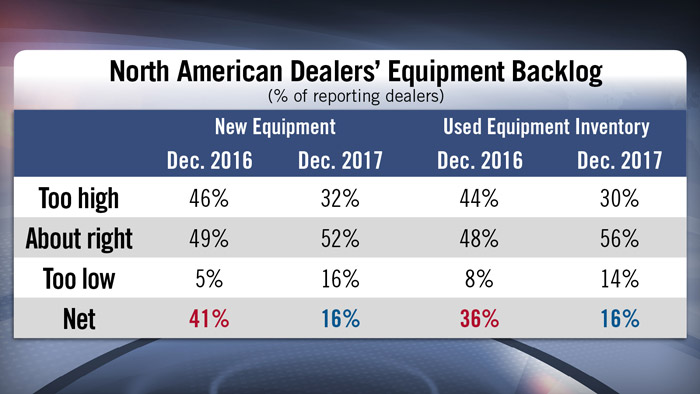 While we officially welcomed the new year this week, dealers began preparing for 2018 long before flipping the calendar to January.

This includes forecasting the most promising precision technologies to increase revenue in the coming year. Our sister publication, Precision Farming Dealer, recently asked dealers to identify their best precision bets, and the results ranged from expanding service offerings to new product lines. 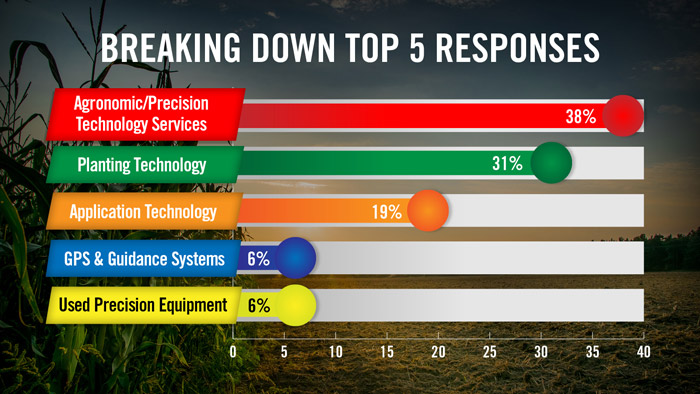 Results of the poll showed agronomic and precision services lead the way as dealers’ best bet to increase precision revenue in the coming year, at 38%.

This was followed closely by planting technology at 31%. Visiting with an independent precision dealer in Iowa recently, he added Harvest International planter row units to his product line to complement and enhance sales of electric drives and hydraulic down force systems.

On the agronomic side, dealers are eyeing up opportunities to capitalize on “precision partnerships” on an acre-by-acre basis. Talking with one precision manager at a Midwest retailer, this includes annually reinforcing their agronomy-first approach to delivering precision services.

Rounding out the top 5 were application technology at 19%, GPS and guidance systems at 6% and used precision equipment, also at 6%.

It’s been said that a weather event — much like the drought in 2012 — is one way to end the slump in ag commodity prices. And according to Rabobank, we might just experience that in 2018.

According to Erik Norland of CME Group, if the temperature in the Pacific falls by more than 1 degree Celsius, “volatility explodes to 1.5 times its normal level.” 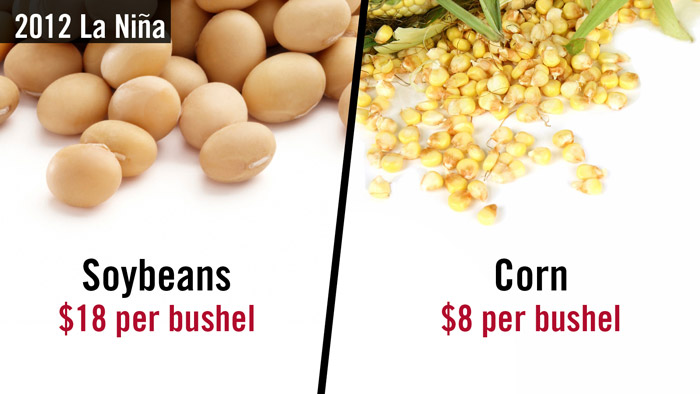 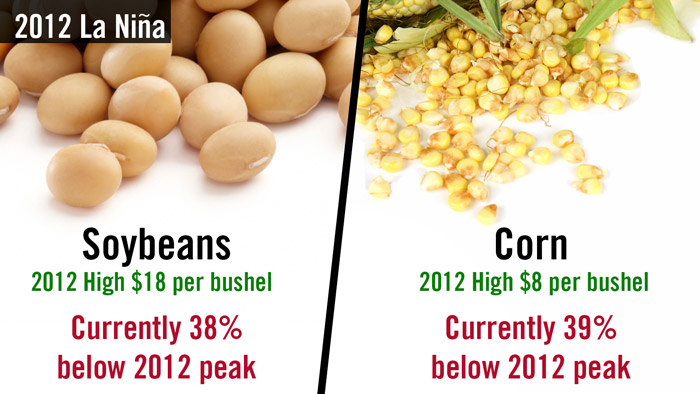 The last severe La Niña was in 2012 and caused a record-breaking heat wave and drought across the U.S. Midwest, Vogel said in a note. As a result, soybean prices eventually reached $18 a bushel and corn prices hit $8 per bushel. According to the Wall Street Journal, soybeans’ average price over the past 5 years has been 38% below that level; corn’s has been 39% below its 2012 high. A return to those levels would constitute an 87% gain for soybeans and a 130% jump for corn.

Farm equipment manufacturers continue to report improved sales in 2017. With their 2017 fiscal year ending on Sept. 30 for Buhler Industries and Claas , and July 31 for Krone, each reported better business levels for the year.

According to Buhler management, this was the “fourth best sales result in the company’s history.”

Forage equipment specialist Krone reported a 2.3% rise in farm machinery sales during its 2017 fiscal year. This was the fourth consecutive year the German manufacturer has reported a sales increase since the start of the ag equipment slump in 2014.

During the past year, Krone’s farm machinery division sales grew by $15.5 million to $696 million for the year. While sales in its largest markets in Western and Eastern Europe saw a slight drop off, sales outside of Europe were strong, accounting for more than 14% of total ag division sales, up from 11% the year before. 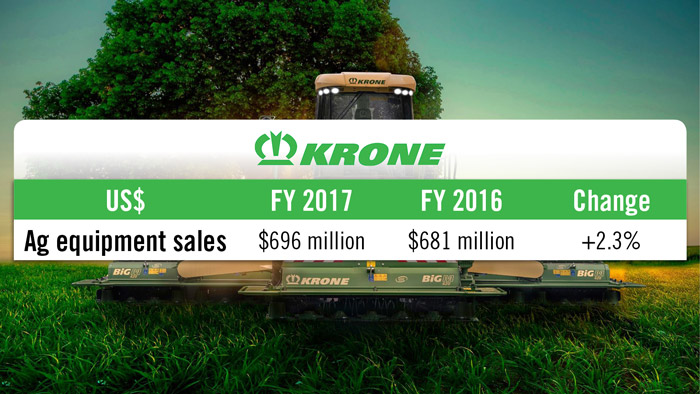 The Germany-based international manufacturer of tractors and harvest machinery increased sales revenues by 3.6% in a challenging global market for agricultural machinery, from about $4.3 billion for the fiscal year ending September 2016 to $4.4 billion in the same period this year. 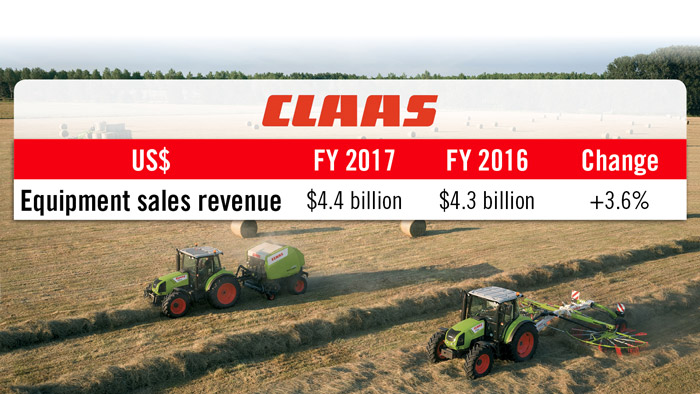 And now from the Implement & Tractor Archives

In 1913, the Bull Tractor Co. of Minneapolis, Minn., introduced the first tractor designed for small farmers. It was lightweight and featured a single “bull” drive wheel on the right and a smaller “idler” wheel on the left. It came with a two cylinder 12 horsepower engine and a cone clutch instead of a transmission gearbox. At only $335, it was an affordable option for small farmers and quickly became an industry sales leader.