On Dec. 12, Titan Machinery celebrated its 10th anniversary as a publicly traded company by ringing the closing bell at NASDAQ. Earlier in the day, the company’s leadership held an investor day. Ag Equipment Intelligence editors had the unique privilege of attending the event.

During his presentation, Titan CFO Mark Kalvoda noted the dealership has reduced its inventory by nearly 60% since January 31, 2015 Titan’s near term goal is to achieve about a 2 times turn on inventory with a path toward a 3 times turn. Kalvoda says improving inventory turn will free up cash for alternative uses.

Kalvoda says a large part of how they are going to improve inventory turns, particularly on the used side, has to do with lifecycle management of equipment inventory in the field.

“We’re taking some of the emotion out of this for the people who bring in these trades, as an example. And rather than postponing and waiting and this inventory sitting around for a period of time and the sales consultant out there who brought it in saying it’s going to go, it’s going to go I’ve got someone on the hook. It’s more forceful now and we’re saying if it sticks around for a period of time we’re going to start aggressively retailing it. And after an aggressive retailing period of time we’re going to take it and go to alternative channels with it, that’s to our remarketing that we have through our outlet concept or we take it to auction at the back end of it. We’re being much more consistent with that approach going forward. And it’s already starting to show benefits.”

On the new equipment side of the business, Kalvoda says they’re refocusing their efforts on preselling equipment to help improve inventory turns.

This week’s Dealer on the Move is AgriVision. The 10-store John Deere dealership based in Iowa is expanding its Leon, Iowa, store. The 10,000 square foot addition will expand the shop, add parts storage and a new service managers office. The expansion is expected to be completed in February.

Every two years, the Equipment Dealers Assn. (or EDA) releases their Compensation & Benefits Report, a comparison of salaries, benefits and unique components of compensation plans from 1,500 dealership responses throughout North America.

Included in the most recent report, released and compiled in 2016, is a widened scope on precision farming-related positions, both at the corporate and dealership level.

Included in the analysis are maximum and minimum salaries from varying dealership sizes, ranging from revenues under $10 million to over $100 million. The report also compares commission averages, which are based on profit, total sales or total salary.

All of the information and commentary on job descriptions are reported directly by the participating dealerships.

Joe Dykes, the EDA’s vice president of industry relations, says dealerships looking to compare their compensation plans have used the report in salary assessment reviews, and as the demand for precision products and services continue to expand, insights from dealership peers could become increasingly vital.

“It’s not a definitive book, but it’s something that they can see currently if they’re way behind the average or if they’re above average, or do they need to make some adjustments or at least consider some adjustments, in these various positions, especially the new positions that are coming on. We added a few new positions this year that we haven’t seen, like Agronomist and GPS specialist and things like that. We’re seeing more and more of the big dealership groups hire fulltime positions to better reflect what they’ve got to do to service their customers.”

More coverage from the report and the growing impact of precision services at dealerships can be found online at precisionfarmingdealer.com. 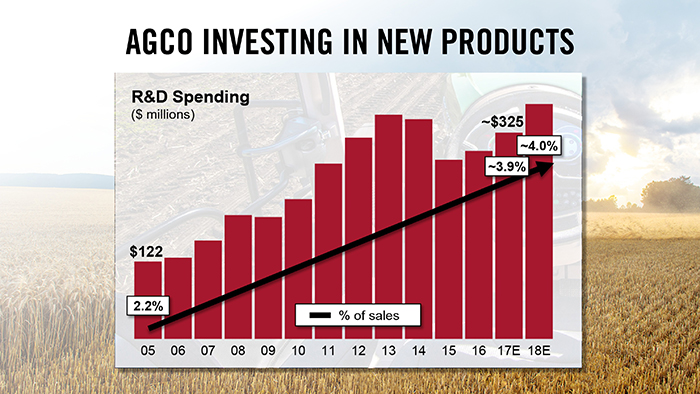 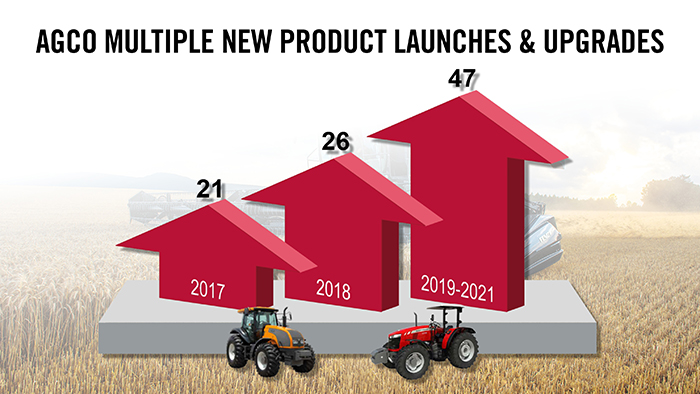 AGCO says it will increase research and development spending in 2018 to about 4% of sales, up slightly from the estimated $325 million spent in 2017. The company indicated that it will continue introducing a variety of new products on top of those it has launched in the past 2 years.

According to Michael Shlisky, analyst for Seaport Global Securities, the most interesting new product was AGCO’s Ideal combine, which AGCO believes will help it to gain market share in the harvester segment of the industry. “AGCO believes Ideal could be a $300 million business within 5 years,” says Shlisky. 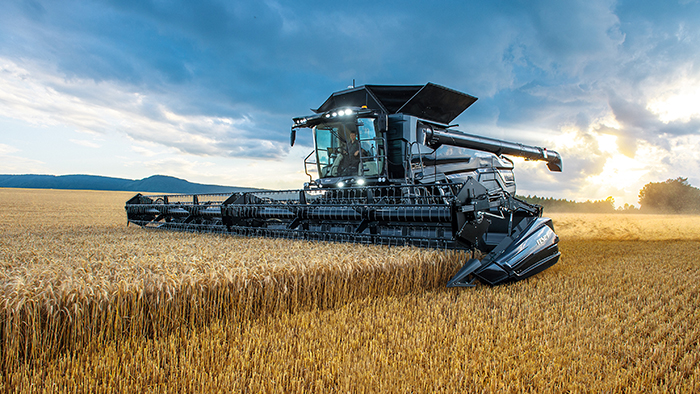 As reported previously by Ag Equipment Intelligence, the new Ideal rotary combine developed for world markets will be supplied through Challenger, Fendt and Massey Ferguson dealerships starting in 2018 in a single “neutral” graphite gray color with the individual brands represented only by their decals.

The new combine design is the culmination of one of AGCO’s biggest product development projects and aims to propel its harvester operations to the forefront of the market.

According to Shlisky, AGCO expects a 9% increase in total revenue in 2018.

CEMA’s latest Business Barometer released last week shows that 50% of European dealers consider their current business to be either good or very good. This is up from 43% last month and 41% in October. In the December survey, 84% of dealers expect sales to grow in 2018. This is down from 94% forecasting growth in September.

In 1874, Deere & Co. introduced the first plow a farmer could actually sit on. Known as the “Gilpin Sulky” plow, named for its inventor Gilpin Moore, it was a single bottom plow pulled by three horses and could plow 3 acres in a 12-hour day.

As always, we welcome your feedback. You can send comments and story suggestions to kschmidt@lessitermedia.com. From all of us at On the Record, Merry Christmas and Happy New Year.