In today’s newscast, we discuss Deere’s suggestion that we’ve turned the corner on the current ag equipment downturn, artificial intelligence in ag, what the Tax Cuts and Jobs Act means for farm equipment dealers, Titan Machinery’s outlook for fiscal year 2018 and a drop in producer sentiment.

An End to the Ag Equipment Slump?

When John Deere reported its latest quarterly earnings in November, the farm equipment manufacturer suggested the ag equipment industry is turning the corner out of the current downturn. The company is anticipating North American ag equipment sales to be up 5-10% in 2018.

While another bumper harvest is keeping crop prices — and farmer income — under pressure, Deere’s report, along with the latest flash report from the Assn. of Equipment Manufacturers suggests farmers are once again buying equipment.

But she also says, “Dealers are now in better shape, so they are more willing to take a trade. Lower structural costs are supporting incremental profits (despite the mix implications of a weak demand environment in the North American row-crop segment), though some of the savings are being offset by selective investments in areas such as R&D.”

This week’s dealer on the move is Agriterra. The AGCO dealer has acquired Dennils Agricenter, adding two stores in Vegreville and Dewberry, Alta. With this acquisition Agriterra has contiguous coverage from Edmonton to the Saskatchewan border.

The Reality of Artificial Intelligence in Ag

The term artificial intelligence, or AI, as it relates to agriculture, is often equated with other trending technologies like autonomous equipment and field sensors.

But AI-based equipment is distinct in that rather than being programed to perform a function, it’s being designed to interpret data pulled from the field, act on it and teach itself best practices in the process.

Ohio State ag engineering professor Scott Shearer envisions a future where less equipment ownership is necessary on the farmer’s end. That could come in the form of leasing equipment or contracting for the service of AI-enabled equipment.

Those changes could have a serious effect on how dealerships operate, but Shearer says the need for specialized service isn’t going anywhere — even if it changes shape.

“It’s going to be essential as AI makes supervised autonomous equipment possible to have service available 24/7. Farmers aren’t going to go for this thing if a tractor is down for 2 days because I can’t get someone to come out and service it. On the other hand, with smaller equipment you might be able to warehouse all the parts essentially in the bed of a pickup truck. So, that changes the dynamic a bit in terms of being able to service the needs of a larger fleet, numbers wise, of much smaller equipment.”

While it’s still going to take some time to separate the science from the fiction of AI-capable tools in ag, Shearer expects the industry will likely first see “supervised autonomy” with farmers watching over a handful of equipment in the field and monitoring performance.

The U.S. Senate passed the Tax Cuts and Jobs Act on Dec. 2, and there are a number of aspects of the bill that are good news for farm equipment dealers.

We spoke with Natalie Higgins, vice president of government relations for the Equipment Dealers Assn., and Rex Collins of HBK, EDA’s tax expert, to find out what sort of impact this tax reform would have on farm equipment dealers. 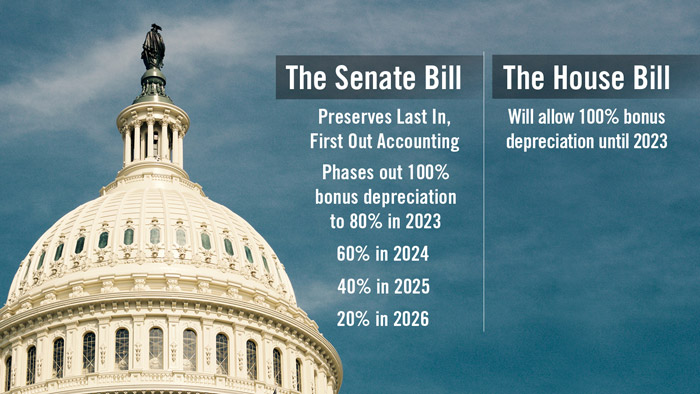 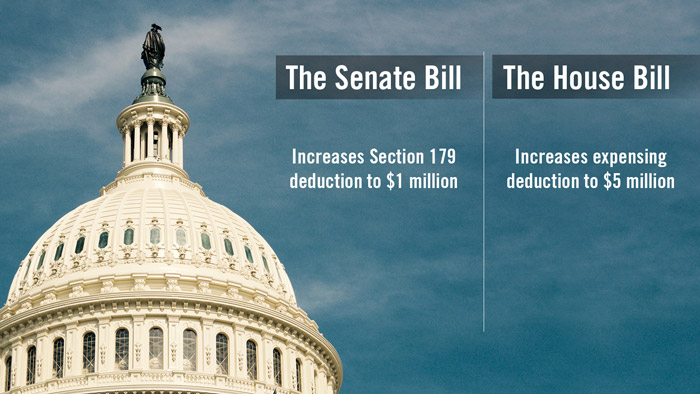 Collins says one of the biggest wins for dealers relates to deductibility of interest.

“We were able to get a carve out for dealers benefit, to the benefit of equipment dealers relative to deductibility of interest. Under both the House and the Senate proposal, interest deductibility is limited. Natalie was able to coordinate a call with us … and the House Ways and Means Committee where we were able to explain to the members of the committee that dealers floorplans … they are so dependent upon borrowing for their inventory that it would have very significant detrimental effect. We gave them some examples of what the impact would be on dealers that was above and beyond what we felt like was the intent of the proposed legislation was.Thankfully they agreed with us. So that probably is the biggest win for dealers that may not even be recognized as a win, if you will, because we jumped in front of it and handled it before it became a problem.”

The one area that may hurt some dealers is the elimination of Like Kind Exchange. As a result of the LKE limitations in both the Senate and House bills, farm equipment dealers and their customers will no longer be permitted to use LKE when purchasing replacement equipment. However with increased Section 179 and bonus depreciation levels, agricultural dealers and their customers will likely be able to mitigate some the impact of the tax on the gain.

Collins and Higgins say this could be particularly hurtful for dealers who carry large rental fleets.

Higgins says it is likely the final version of the bill will be sent to President Trump before Christmas. EDA and HBK will be hosting a webinar to go through the bill and its impact on dealers on Dec. 21. 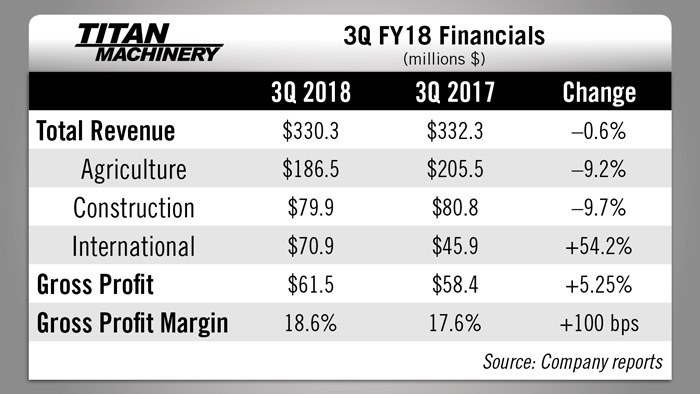 On Nov. 30, Titan, North America’s largest farm equipment dealer group, reported total equipment revenue for the quarter was up 1.8%. Much of the improvement was attributed to a 54% year-over-year increase in Titan’s international sales.

Overall, total revenue for the period was $330 million, down less than 1% vs. a year earlier. Agriculture revenues were down 9.2%, construction was down 9.7%. Gross profit increased 5.2% to $61.5 million and gross profit margin was up a full percentage point to 18.6%.

Titan’s ongoing effort to reduce used inventory continues to improve the company’s overall performance. It reduced its used inventory in the period by nearly $21 million and by $46 million, or 29%, year-to-date. The company increased its new equipment inventories by nearly $38 million based on growing customer confidence and improved fourth quarter demand. 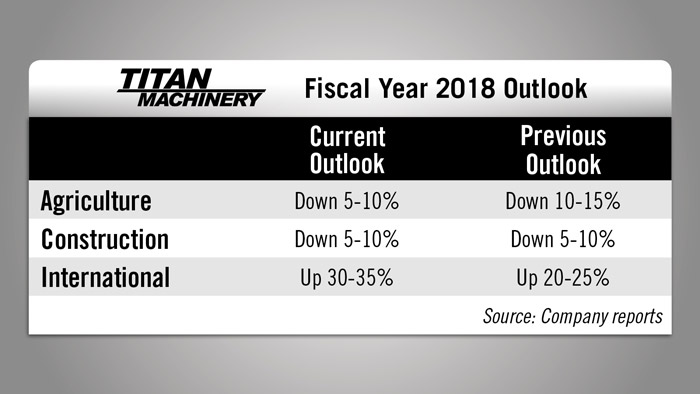 In its outlook for the full year, Titan expects agriculture revenues to be down 5-10%. Its previous outlook called for a decline of 10-15%. It is forecasting international revenues to increase by 30-35% compared to its earlier projections of a 20-25% increase. The dealership group also expects 7.5-7.9% equipment margins vs. its previous outlook of 7-7.5%. 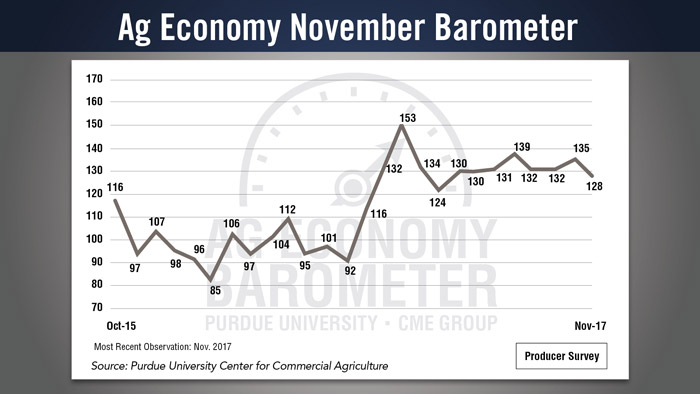 Although the decline in sentiment pushed the Ag Economy Barometer reading to its second-lowest level of 2017, sentiment remains much more positive than it was prior to the fall 2016 election.

Producer expectations regarding farmland values appear to have strengthened somewhat as more producers expect farmland values to increase than decline in the next 12 months, the first time this has happened since data collection began in October 2015.

However, the biggest shift in producer expectations regarding farmland values seems to be a movement away from an expectation of weaker values to an expectation that values are likely to remain unchanged over the next year. 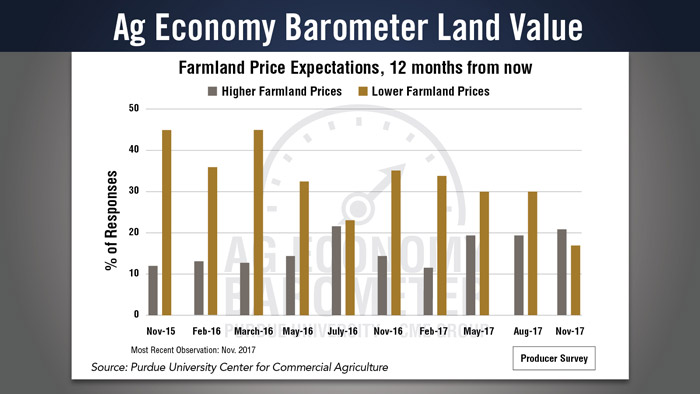 One hundred years ago, the tractor was a very different piece of equipment, according to Debra Reid, curator for agriculture and environment at the Henry Ford Museum in Dearborn, Mich. 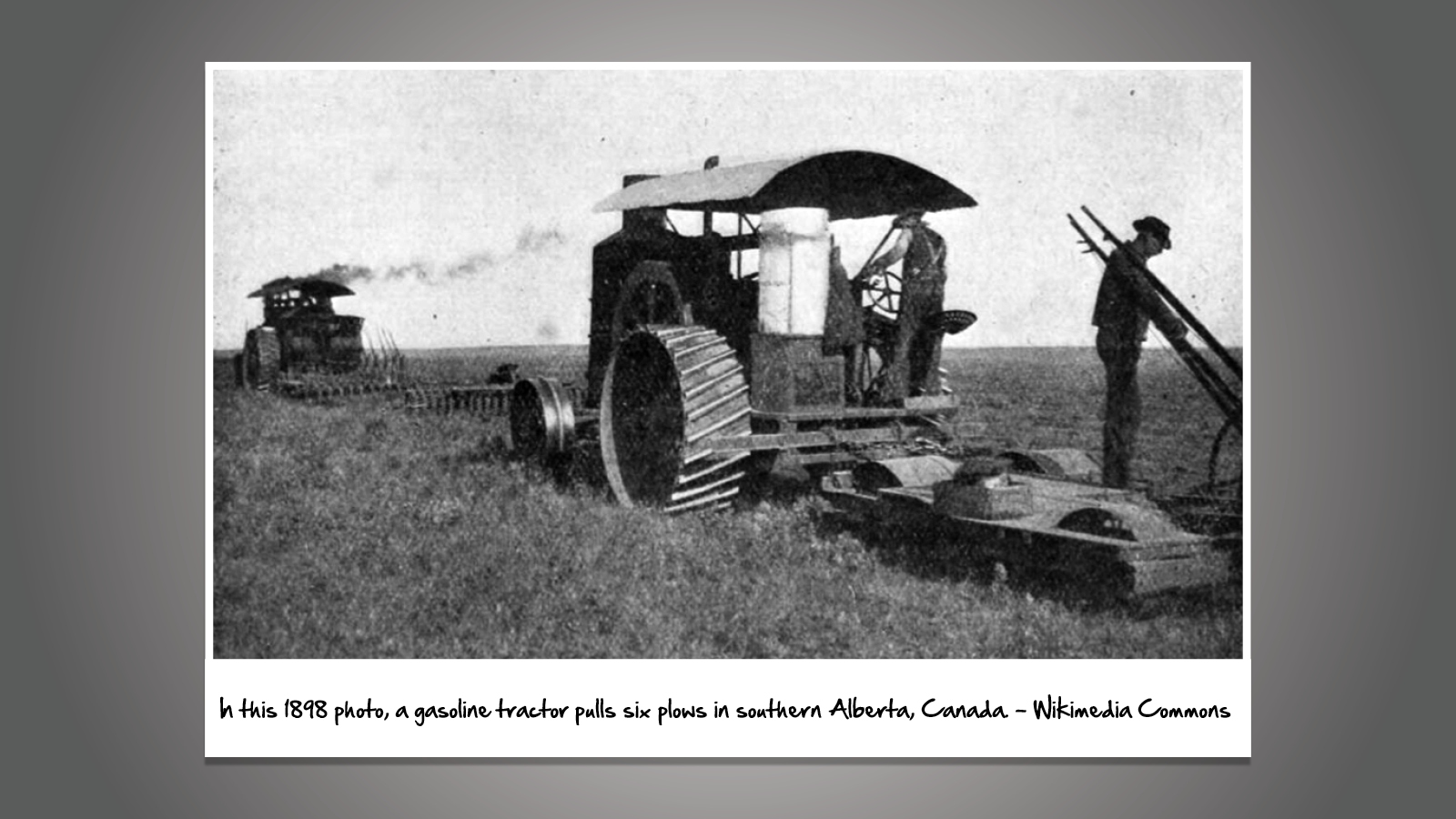 She says, “Before the one-man tractor, plowing required two men — one to drive the team and one to handle the plow. With the advent of large traction engines and multiple-bottom plows, an engineer often operated the steam engine while a man rode on the tractor to manage plow levers. Still another man walked along to knock weeds and roots off the plow bottom.”

But in 1903, two University of Wisconsin graduates in Charles City, Iowa — Charles Hart and Charles Parr — built 15 machines powered by the two-cylinder gasoline engine they had developed, according to the Smithsonian Institution. They called them “tractors,” a term with Latin roots that combined the ideas of “traction” and “power.”

The new tractors could be operated by one man, but they were 7-ton behemoths, so very few farmers took to the new machines.