In today’s newscast, we discuss some of the results of the 2017 Cost of Doing Business Study, an increase in demand for ag lending, creating a more flexible precision farming service team and a comparison of U.S. and Canadian dealer outlooks for the year ahead.

The Western Equipment Dealers Assn. released its 2017 Cost of Doing Business Study last month. The study is based on the responses of over 200 dealerships covering 672 locations. 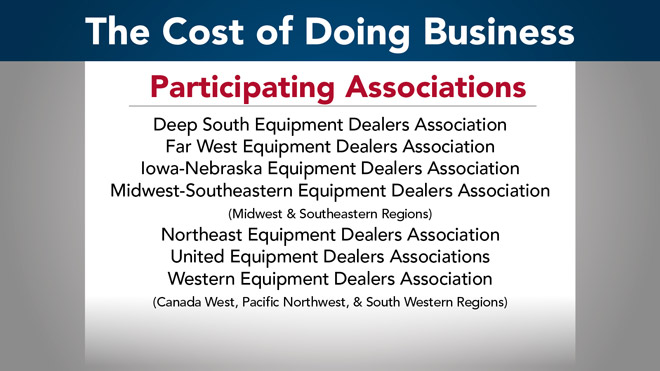 This year’s study shows that parts sales to total sales have risen to 17.9% of the total sales mix. This is an improvement from 16.2% in 2016 and up from 14.6% in 2015. Bob Charbonneau and Gord Thompson, who presented a webinar on the results earlier this month, say this is the highest level in many years. 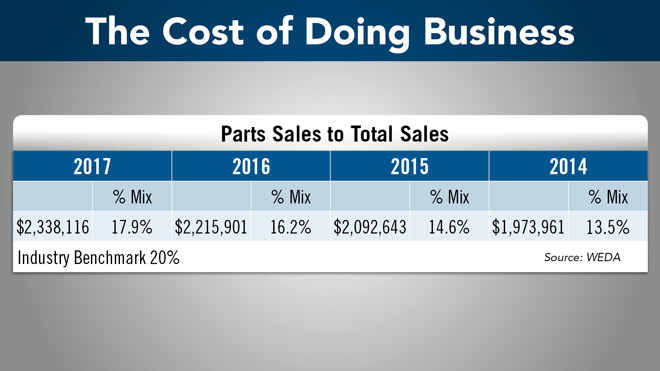 The improvement is due to a combination of a 6% year-over-year increase in parts sales and declining wholegoods sales. They point out while this is a solid improvement, it is still below the industry standard of 20%.

On the service side of the business, service sales made up 6.8% of the sales mix, essentially flat with 2016, although from a dollars standpoint service sales were up. 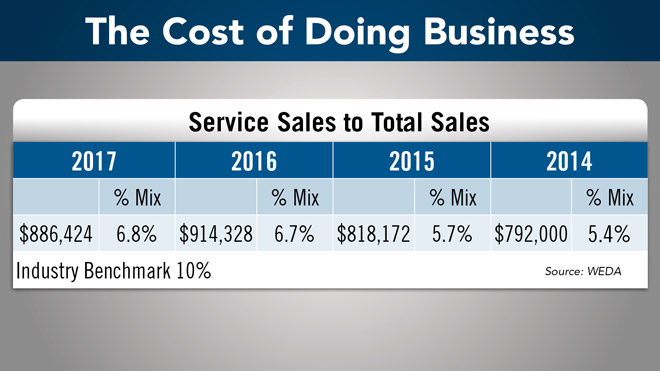 Thompson had this to say:

“We had a little bit of a reduction in service sales and our thought is more than likely that reflects lower wholegoods levels of equipment going through the service department. As equipment sales decline they use the service department less. That’s likely the cause. So the mix is better at 6.8% but it’s still below the industry standard of 10%. This would imply that we've got some unutilized service capacity since sales did decline. Unless there’s just been some pricing reductions, but I think it reflects a little bit of slack in capacity.”

Thompson calls service the “Opportunity” department in most dealership, saying it offers the most upside in the whole operation for dealers willing to put in the effort and planning required to capitalize.  He says, “You can’t afford to not capitalize on this in today’s marketplace and it gives a great competitive advantage.”

Farm Equipment will have more coverage of the Cost of Doing Business study in an upcoming issue. Dealers interested in seeing the complete results can contact their local association office to order the report. And, those dealers who participated can receive it for free.

This week’s Dealers on the Move include Van Wall Equipment, Reichmann Bros., Claas of America, BayWa Ag and Agrivision Equipment

During the last several years, a growing majority of dealers have either established a separate department for precision farming or designated a precision farming specialist as the primary salesperson for ag technology.

Results of the 5th Annual Precision Farming Dealer Benchmark study, revealed that dealers operating a separate or independent precision department increased from about 40% last year to 47% in 2017.

But there is also a trend toward a more centralized structure with a precision farming business, as farm equipment dealers acknowledge the need to integrate multiple departments to capitalize on broader service opportunities.

This is a path that Johnson Tractor, a 4-store Case IH dealership based in Janesville, Wis., is taking to create a more responsive and flexible service team, especially when it comes to supporting customers’ precision needs.

Jason Pennycook, precision farming specialist with Johnson Tractor, shares how he got the inspiration for the ongoing transition at the 2017 Precision Farming Dealer Summit, along with a few of the objectives for creating a more efficient overall service business within the dealership.

“There was a speaker who was talking about why they had moved away from a precision farming department as a completely separate entity, and sort of worked everyone back into service or wholegoods to keep things streamlined for the customers. They (customers) aren’t dealing with multiple people. The tech comes out to work on his combine and he can also work on his GPS. We thought that was a wonderful idea and we’re in the process of trying to get our operation to go that route so we can get more of the precision stuff worked into the service department and not be overlapping areas.”

Service flexibility continues to be a priority within dealerships and will be a topic of discussion at the upcoming 2018 Precision Farming Dealer Summit in Louisville, on Jan. 8-9. Visit PrecisionFarmingDealer.com for more information and to view the full program agenda and speaker lineup.

Ag Lending Up Slightly in 3Q

The Kansas City Federal Bank is reporting that demand for loans to finance operating expenses was the primary driver of non-real estate farm lending in the third quarter. According to the bank’s most recent Ag Finance Databook, the volume of loans used to pay for current operating expenses increased 15% from the previous year, whereas the volume of loans used to finance livestock and farm equipment purchases declined. 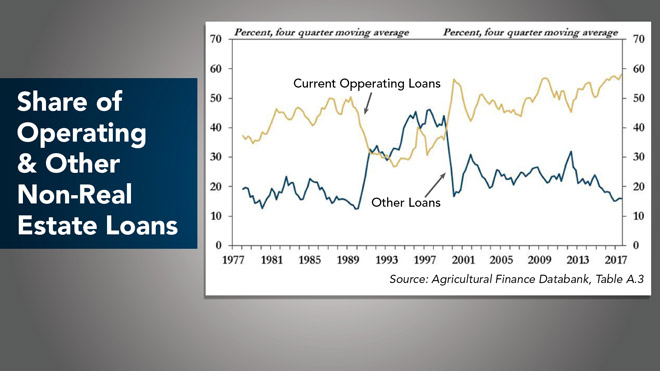 Operating loans have continued to account for a rising share of commercial banks’ farm loan portfolio in recent years, says Nathan Kauffman, co-author of the report. In fact, operating loans have accounted for nearly 60% of the total volume of non-real estate farm loans over the past four quarters, the highest in the 40-year history of the banking survey. At the same time, the share of other loans, including those for ag machinery, has fallen to levels last seen in the early 1990s. 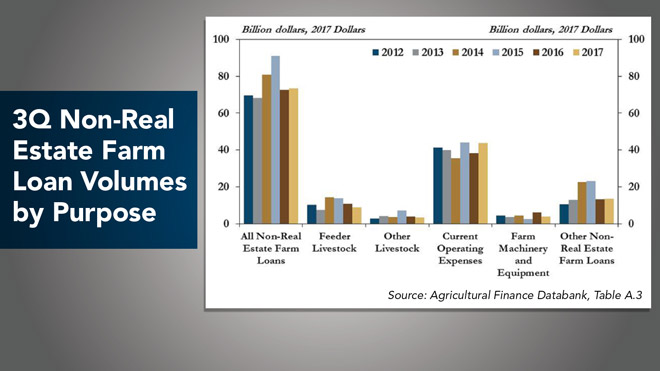 Low farm profit margins have caused bankers to gradually raise interest rates on loans used to finance operating expenses, farm machinery, feeder livestock and other livestock have increased about 50 to 75 basis points from the previous year. Although current rates remain historically low, interest rates on operating loans have increased about a full percentage point since the lows observed in 2015. 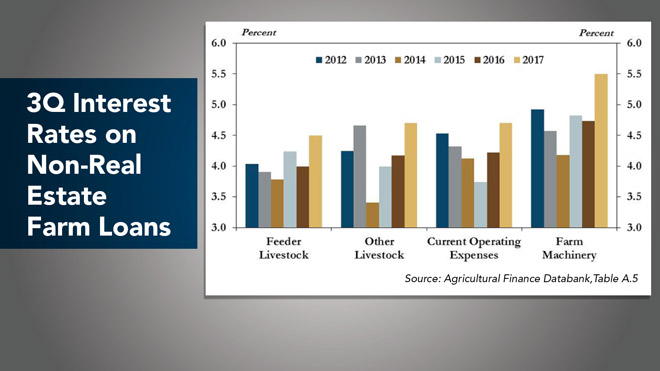 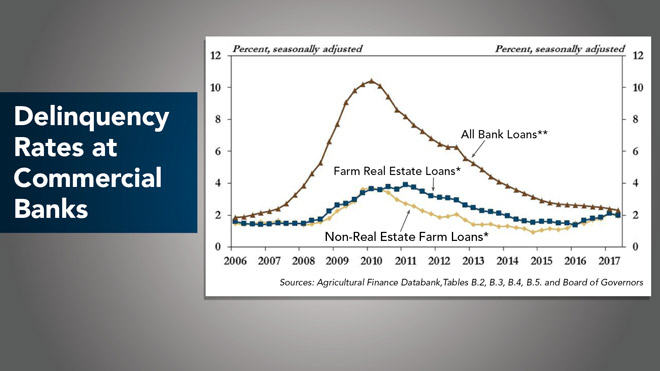 Dealers Outlook for Year Ahead Improves 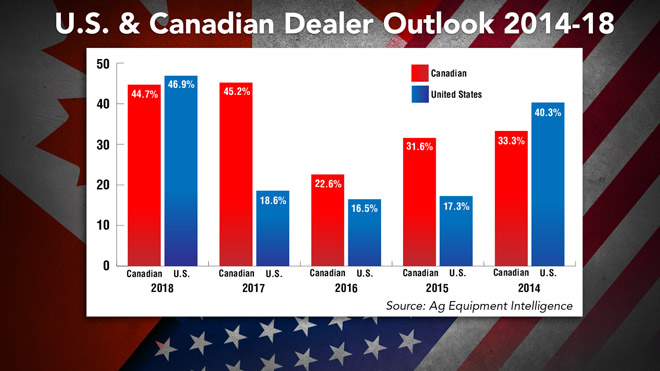 Breaking it down further, nearly 47% of U.S. dealers are forecasting sales to improve by 2% or more in 2018, and about 45% of Canadian dealers are anticipating an increase.

While the two groups are relatively in line with each other this year, historically Canadian dealers have had a much more positive outlook for improving sales. Looking back over the last 5 years of the Dealer Business Outlook & Trends reports, Canadian dealers’ projections for new equipment sales never hit the low point U.S. dealers hit.

The last time U.S. dealers had a better outlook than the Canadians was in 2014 when 40.3% of U.S. dealers were forecasting growth compared to just 33.3% of Canadian dealers. 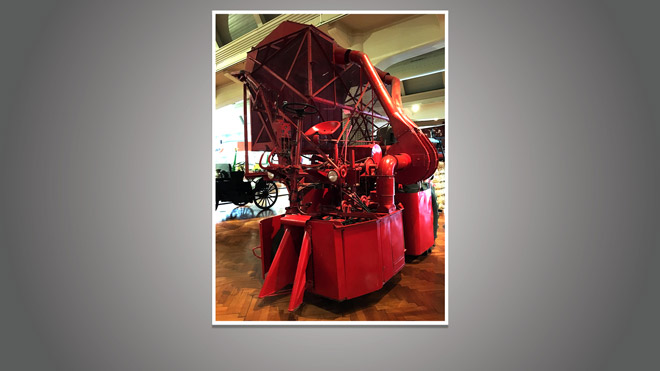 In the mid-1900s, cotton was the last major North American crop still dependent on hand labor. The self-propelled cotton picker was invented by Daniel Rust and could pick as much cotton in a day as 75-100 people. The machine reduced the labor required to pick cotton by 80%, contributing to the Great Migration from the rural south to northern cities in the 1950s.

Dealers Point to Improvements in Sales and Outlook