For the first time in 5 years the majority of dealers are projecting revenue increases for the year ahead. That’s according to Ag Equipment Intelligence’s 2018 Dealer Business Outlook & Trends survey. 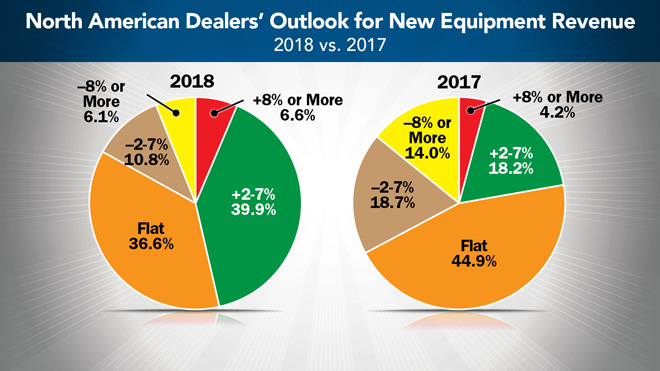 Breaking down the results further, 6.6% of dealers see revenues increasing by 8% or more in 2018 and 39.9% are projecting business levels to improve by 2-7%. A little over one-third of those responding expect revenues from new equipment sales to be flat during the year ahead.

This compares with last year’s survey results when only 4.2% of U.S. and Canadian dealers anticipated an increase in revenues of 8% or more a year ago and 18.2% who were forecasting gains of 2-7%. A year ago, nearly 45% of dealers were anticipating flat sales for 2017. 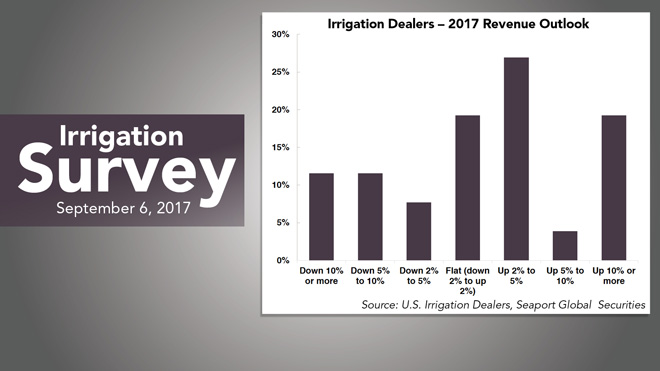 Shlisky says, “While the dealers we heard from were split regarding the growth prospects of new equipment — 35% expect growth in 2017 while 31% expect a decline — the outlook for parts and service revenues were substantially more positive, with 52% expecting an increase while 16% expect a decline.”

We’ll have more for you on the results of this survey in the next issue of Ag Equipment Intelligence.

SEMA, a John Deere dealer in southeast Minnesota, will consolidate 3 of its stores as well as its Rochester business office into a new facility in Mower County. The new facility will serve as the main parts warehouse for the dealership group and will also add more space for on-site storage of customer equipment.

John Deere dealer Ag-Pro Companies has acquired Fredericksburg Equipment of Fredericksburg, Texas. The dealership now has 12 locations in Texas and a total of 50 across Alabama, Georgia, Florida, South Carolina and Texas.

Cervus Equipment recently broke ground on a new 28,000 square foot facility in Hanna, Alberta. The John Deere dealer expects the building to be completed in late 2018.

Carolina HarvesTrax opened as a Claas dealership in Monroe, N.C., in September. It took over the former Black’s Equipment dealership location. Black’s exited the business after 45 years.

Now, here’s Jack Zemlicka with the latest from the Technology Corner.

Collecting aerial imagery in agriculture has increased in recent years with the emergence of unmanned aerial vehicles and more sophisticated infrared and remote sensing tools. However, challenges remain as to how timely captured data can be processed and utilized for in-season crop management decisions.

Acquisitions and collaborative partnerships within the precision industry are accelerating technical improvements to allow for near real-time application of aerial imagery. This week, Manitoba-based precision ag company Farmers Edge announced an agreement to become the sole distributor for Planet’s satellite imagery services, which include RapidEye and SkySat.

Planet is a data analytics and aerospace company based in San Francisco and according to Wade Barnes, president and CEO of Farmers Edge, the partnership will be a game-changer for overcoming challenges of partial, delayed or inconsistent views of fields.

Barnes adds that the partnership is a significant investment for the company to becoming a more comprehensive provider of data analytic services and aerial imaging analysis.

“Essentially, Planet was kind of handing the keys over to a certain degree to us to drive this for them for the next 3 years. But also, it’s a big thing for a company of our size. We’re not a Monsanto or a DuPont that have huge war chests. We had to make a significant cash commitment in order to solidify this deal. I think both parties had to make big commitments on both sides, but that’s how you get great partnerships.”

Barnes added that long-term, he sees farmers, retailers and dealers seeking more independent providers of data management services, provided the there is proven value, vs. those companies who may be affiliated with a specific brand of seed, chemical or equipment.

The Assn. of Equipment Manufacturers released its September Ag Tractor and Combine Report on Oct. 10. For the first three quarters of the year, high horsepower tractor unit sales in the U.S. are down 16.4% and combine unit sales are down 3.5% vs. the same period of 2016. 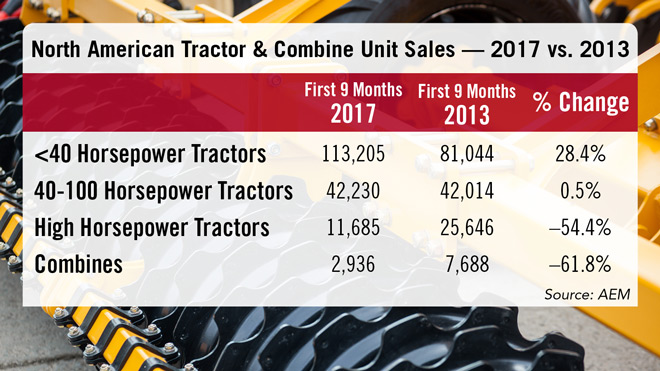 While the declines the industry has seen over the last several years appear to be stabilizing to some extent, they are still down considerably vs. 5 years ago when ag equipment sales peaked.

While the numbers for high horsepower tractors aren’t good, they’re worse for combines. In 2013, unit sales through the fist three quarters for combines were 7,688. For the same period this year unit sales are just 2,936. That’s a drop of 61.8% over 5 years.

Smaller equipment unit sales have been stable or improved over the 5-year period, however. Mid-range tractor sales are essentially flat when you look at the first 9 months of 2017 vs. the same period of 2013. Compact tractor unit sales, though, have grown 28.4% during this period.

Due to the strength of the utility and compact tractors, total tractor unit sales for the first three quarters are up about 10% vs. 2013.

Art’s Way Manufacturing reported its third quarter earnings on Oct. 4. Sales for the quarter were up 1.8% vs. the same period last year. But, through the first 9 months of the year, sales are down 10.2% year-over-year. 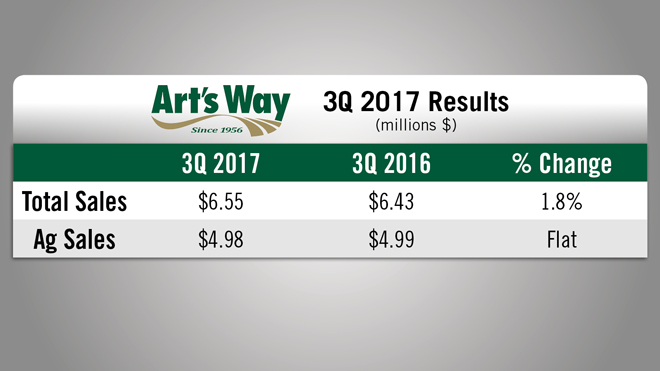 Sales from the ag segment were $4.98 million, which is roughly flat with the third quarter last year.

Carrie Gunnerson, president and CEO, says this was Art’s Way’s strongest and first profitable quarter since the second quarter of 2015.

Looking ahead, Art’s Way Chairman of the Board Marc McConnell says ag sales will continue to increase, but notes it is mostly due to the need to replace equipment. He says, “Historically a lot of buying was done for tax reasons and a lot of farmers always had new equipment, because they needed to for tax reasons. And really more of the purchasing has been out of necessity the last couple of years and they keep using the equipment and using it up. And at some point they just have to spend some money.”

McConnell says the feedback they’ve gotten from dealers is a farmer can put off buying equipment for a year or two, but after a certain point they are going to need to spend the money to replace their equipment. And, he says we seem to be at that point now because there hasn’t been much sales activity for 2 or 3 years. 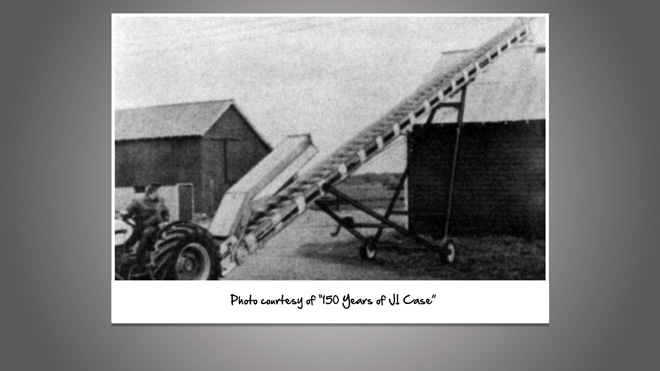 In the late 1950s, the J.I. Case Co. further broadened its line of equipment with the addition of elevators. The venture was short-lived, however, as there were already a number of shortline companies with an established market. But perhaps more significant, by 1960 the corn combine was gaining serious attention. With it came an entirely new approach to material handling equipment. The conventional elevator was not part of the transition as auger conveyors were simpler and faster.