In today’s newscast, we discuss what can be learned from 2005’s Hurricane Katrina clean up equipment needs in the wake of Hurricanes Harvey and Irma, AGCO’s closing of the Precision Planting acquisition, Titan Machinery’s latest earnings and Deere’s acquisition of Blue River Technology.

The damage left by Hurricane Harvey in Texas will be felt for weeks, months and likely years to come. And the same will likely be true when Irma, currently a category 5 hurricane, hits Florida.

Hlavinka Equipment’s 8 locations in the Gulf Coast region of Texas all experienced some level of damage from the rain, wind and flooding. General Manager Terry Hlavinka says there will certainly be an increased demand for utility equipment such as skid steers, loaders and tractors under 100 horsepower, as the clean up process begins. However, he says, that will be completely offset by the decrease in demand for harvesters and large ag tractors as a result of the damaged crop.

Looking back at the damage Hurricane Katrina caused in 2005 offers some insights on the need for equipment as clean up gets under way in Texas and Florida.

Dave Gibson, wholesale manager for H&R Agri-Power, recalls from his time with Lashley Tractor Sales in the metro Atlanta area that when flood storms hit the Gulf Coast, the dealership would see an increase in sales activity for skid steer loaders, grapples, buckets, pallet forks and small tractors.

He says, “It was a good way to purge your used inventory of attachments and machines because there were guys who would buy machines, quit their jobs and go down there and work for several months.”

Charlie Glass, of Glass Management Group analyzed USDA’s 2007 Ag Census data for Mississippi and Louisiana and says the impact of Hurricane Katrina had a significant impact on sales of agricultural tractors, combines and cotton pickers in those states. 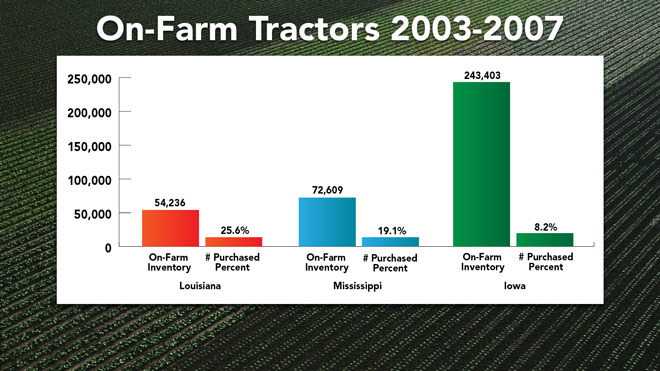 A comparison with the same data from the state of Iowa shows something unusual was going on in Mississippi and Louisiana. In Iowa, all categories saw declining or flat sales for the period. Glass concludes, “It does appear that tractor replacement during that period in the hurricane damaged states did show more activity than did that of the state of Iowa.”

Based on the historical data following Katrina, there’s potential that Texas will see similar increases in equipment sales.

Greg Peterson of Machinery Pete says there will certainly be an uptick in demand for used equipment, but he doesn’t anticipate pricing going up. One of the biggest differences between now and 2005, he says, is how prevalent the internet is today in moving used equipment.

With Hurricane Irma now one of the strongest Atlantic hurricanes in history, it’s likely that demand for used equipment for clean up and replacement will increase in Florida as well.

Finally, Gibson warns that dealers and customers alike should be weary of any equipment coming out of Texas as there will likely be people out there trying to sell equipment out of state without disclosing damage details.

Widespread availability of fully autonomous vehicles in agriculture may still be several years away. But in recent years, companies have publicly showcased self-driving innovations, advancing development to the cusp of commercial production.

A motivating factor for autonomy in ag is the desire by companies to develop smaller, more efficient, versatile vehicles to perform a variety of field operations for farmers.

This was a driving force behind the development of DOT, a new diesel powered autonomous platform, which debuted this summer. The brainchild of Norbert Beaujot, founder of DOT Technology Corp., and Saskatchewan-based equipment manufacturer SeedMaster, DOT is the result of a 3 year engineering effort to create scalable, flexible farm implement, while also removing the driver.

We caught up with Beaujot at this year’s Farm Progress Show to learn more about the timeline and target partners to deliver the technology to North American farms.

“It will happen. There’s so much interest. There’s a lot of steps we’re taking. We’re introducing it very aggressively to all shortline manufacturers so that they can develop their technology to be mounted onto to DOT. That will be, long-term, very important. SeedMaster started with those 4 implements, that I talked about because SeedMaster had the luxury of knowing about this device for the last 2 years. So we were able to quickly develop some units we knew we could manufacturer ready for DOT.”

Beaujot added that commercial production of DOT will certainly disrupt the traditional manufacturing model, but in his words, the today’s tractor is obsolete, too inefficient and there are better production paths to be pursued going forward.

AGCO announced on Sept. 5 that it has finalized the purchase of Precision Planting from The Climate Corp. Just a week before, we visited with Eric Hansotia, senior vice president with AGCO, during the Farm Progress Show in Decatur, Ill.

He says the impact on the dealer network is two-fold.

We also spoke with Jim Walker, vice president of North America ag for Case IH, during the show to get his take on the acquisition. He says they’re satisfied with outcome of the acquisition.

Despite sluggish sales during the second quarter of its fiscal 2018, Titan Machinery executives told analysts following release of its earnings report on Aug. 31 that its U.S. ag and construction equipment markets have begun to stabilize and improve. As a result, the dealership group says it believes its expense and efficiency initiatives will soon deliver profitable growth.

During the call, David Meyer, Titan’s chairman and CEO said, “We have early indications that many of our customers are approaching the point of new equipment replacement.”

“We’ve continued to market a broad range of price points with lease options, flexible financing and extending warranties to generate demand. We're also increasing our focus on the product support side of the business through our new operating structure and with expanded field service and parts drops and improved parts availability,” Meyer said. 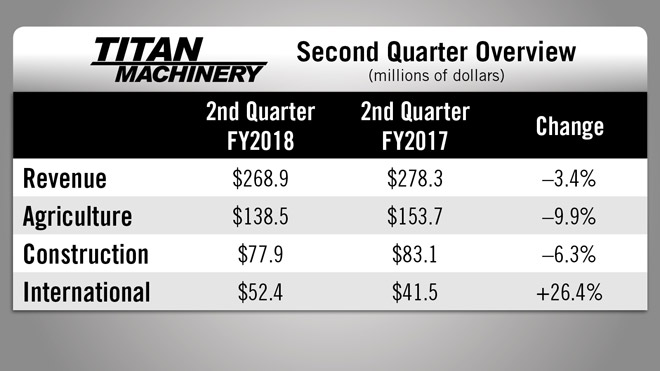 For the second quarter of fiscal 2018, Titan reported revenues of $269 million, down 3.4% from a year earlier. Its ag segment generated revenues of $138.5 million, which was down by nearly 10% year-over-year.

Sales of construction equipment declined by 6.3%, but its international business increased by more than 26% in the second quarter. Nonetheless, the dealership group, Case IH’s largest retailer of farm machinery, reported significant progress in reducing equipment inventories and improving margins during the period.

Deere & Co. announced late Wednesday that it had signed a definitive agreement to acquire Blue River Technology, a leader in applying machine learning to agriculture.

Blue River has designed and integrated computer vision and machine learning technology that will enable growers to reduce the use of herbicides by spraying only where weeds are present, optimizing the use of inputs in farming — a key objective of precision agriculture.

While there is some debate over how ready farmers are today for this type of intelligent technology, Beverly Flores, vice president of media relations for Deere, says the acquisition is an investment in the future of agriculture.

“I think that is part of the question in the industry and that is the speed at which anything moves through. And that’s why we’re making the investment today in Blue River because we do believe in the impact that this will have on the industry itself. If you look at what Blue River is currently doing in field testing with seeding and spraying technology, using machine learning to identify which plants are crops and which ones are weeds and apply that crop protection product exactly where it’s needed. So as you think about that and think about even the individual jobs beyond that in giving farmers and producers that capability to start to get more specific in their operations and start to answer questions like, ‘Hey I wonder could I take care of this portion of the field.’ But now they can start to answer could I take care of that specific plant. How do I make that one plant grow better and therefore make all the plants do better across the field.”

[Podcast] Equipment Needs for Hurricane Clean Up — Learning from Katrina