In today’s newscast, we look into how Deere & Co.’s recent acquisition in the construction market will help make the manufacturer less reliant on agriculture, tactics for branding a dealership’s precision business, whether or not the wet spring means much for the water wars in California and how producers, dealers and manufacturers are reacting to renegotiating the North American Free Trade Agreement.

Deere announced it is buying the privately held international manufacturer of road construction equipment for $5.2 billion in cash, including assumed debt. The Wirtgen Group had sales of €2.6 billion in the year ending Dec. 31, 2016.

In addition, Max Guinn, president of Deere's Worldwide Construction & Forestry Division, said, "Spending on road construction and transportation projects has grown at a faster rate than the overall construction industry and tends to be less cyclical.”

While expanding its construction equipment lineup, analysts say the acquisition will help reduce Deere’s exposure to the agriculture equipment business.

A Reuters report cites comments by William Blair analyst Lawrence De Maria, who said, “The acquisition will help Deere diversify its business which has been heavily reliant on agriculture while improving the distribution of its North American centric construction business. While there are growth opportunities, this allows for greater scale in construction markets and extends the equipment portfolio.”

According to a presentation to investors, Deere said its 2016 Ag and Turf operations accounted for 79% of net sales, while Construction and Forestry equipment brought in 21% of equipment revenues. The company is projecting net sales from construction and forestry will increase to 30%, while ag and turf’s share will fall to 70%. 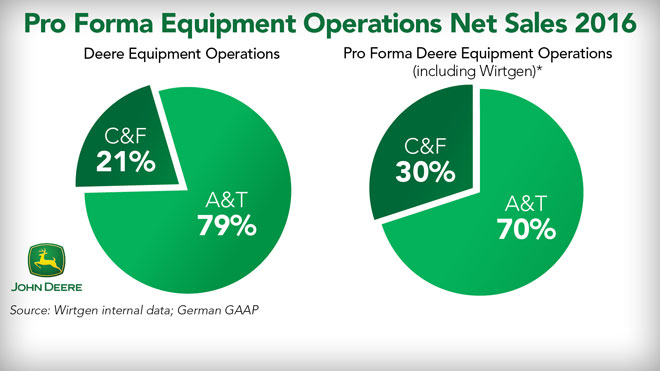 This week’s Dealer on the Move is Ag-Pro Companies. The John Deere dealership group has acquired Cole’s Equipment in Dalton, Ga. The group also recently opened a new store in Jacksonville, Fla., serving the rural lifestyle market. Ag-Pro now has a total of 49 stores and as of this year sits in the No. 2 spot on Ag Equipment Intelligence’s Big Dealer List. It is John Deere’s largest North American dealer group in terms of store locations.

Dealerships tend to adept at selling — whether it’s machinery, parts or service. But talking with precision farming managers, one area that is often an afterthought in their department is the need to sell themselves.

With an increasingly competitive precision market, savvy dealers are effectively marketing the performance of their precision team to positively impact the bottom line of the business.

Establishing a reputable and reliable brand for a precision business starts by defining the objectives of the department, says Kevin Depies, part of the management team at Ritchie Implement, based in Cobb, Wis.

Before establishing a marketing strategy, he says it’s worth answering a few pointed questions, including ‘What do we want to represent ourselves as?, ‘Where is that going to take us?,’ ‘What is the need of our marketplace?’ and then ‘Can we make money, is it profitable?’

For Ritchie, it was a matter of communicating a comprehensive marketing message, vs. taking too narrow of an approach.

“We looked in the mirror. Who do we want to be? Can we put this as a standalone business? No. We just couldn’t. It didn’t work with what we were. We sell Ritchie Implement. We don’t sell wholegoods. We don’t sell service. We don’t sell parts. We sell the whole dealership. So in order to put this together, we really wanted to sell our package — our team, our parts guys, our service guys, our sales guys as a whole to provide the best, first-pass quality.”

Depies adds that the overriding motivation of a branding initiative should be revenue. As he says, “a dealership can have the best marketing strategy in the world, but if it’s not making money, it doesn’t make sense.”

While there are no areas of California currently under Extreme Drought or Exceptional Drought conditions, the state isn’t out of the woods yet, despite heavy rains this spring. 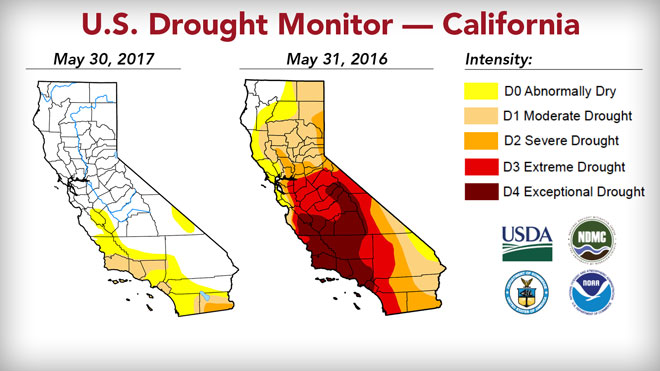 While farmers, dealers, manufacturers and consumers alike welcomed this winter’s precipitation, water continues to be a source of contention for California. We sat down with Andrew Cummings, owner of T.G. Schmeiser, while traveling in Northern California a few weeks ago. He says the water tables in the state had dropped significantly over the last 5 years and each year starts over in terms of how much water will be available.

While dealers have expressed that their customers have significant concern over how renegotiating the North American Free Trade Agreement and other trade agreements might impact U.S. ag exports, producers are more open to the changes. 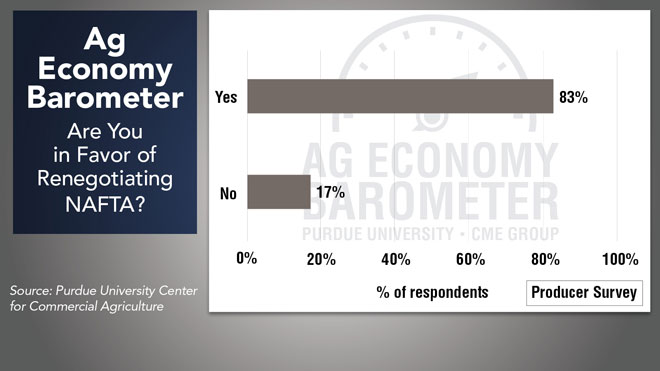 Purdue University’s Center for Commercial Agriculture’s latest Ag Economy Barometer survey asked producers whether or not they were in favor of renegotiating NAFTA. An overwhelming majority of 83% said yes, they favor renegotiating the terms of the agreement. That’s in contrast to dealers who responded to a Farm-Equipment.com poll back in January. According to that poll, 45.6% said they were “significantly concerned.”

According to the Ag Economy Barometer survey, 63% of respondents thought it was likely that renegotiating the trade agreement would benefit the U.S. economy as a whole and 61% felt it would specifically benefit U.S. farmers.

The Assn. of Equipment Manufacturers and the Equipment Dealers Assn. recently polled equipment dealers and manufacturers to gauge their perception of NAFTA and its potential impact on the ag industry. The results showed that 36% of dealers and 59% of manufacturers were largely satisfied with the existing terms of the trade agreement. 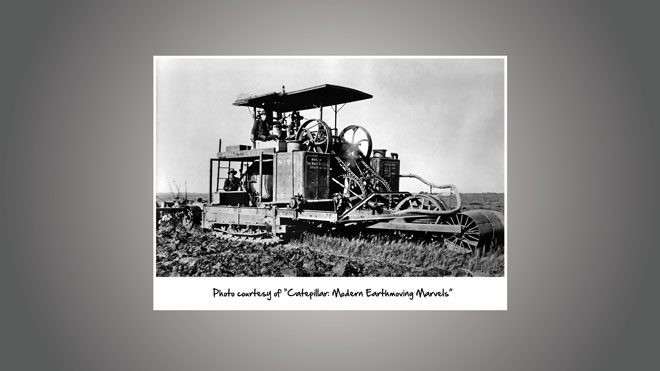 The first patent for a crawler track design was awarded to R. Hornsby & Sons of Grantham, England, in 1904. The following year, an invention called the Roberts “chain track” was put on an older model Hornsby oil tractor. By 1908, they were being promoted with the first film ever made for commercial purposes. But the idea didn’t catch on. Hornsby eventually sold the patent rights for its chain track to Benjamin Holt and Holt Manufacturing Co. for $8,000 in 1914, just as World War I was starting. The word “Caterpillar” was first applied to a Holt Machine in 1905 when the company’s photographer, Charles Clements, exclaimed, “If that don’t look like a monster caterpillar!” He labeled the negatives of the film “Caterpillar,” and Holt eventually took on the name as his trademark, registering it with the U.S. Patent Office in 1910.