What's Next for Precision Planting?

In today’s newscast, we speculate on why Monsanto and Deere’s Precision Planting deal fell apart and who the potential suitors may be. A number of manufactures and dealers released their quarterly earnings reports over the last couple weeks. This week we cover Rocky Mountain, Cervus Equipment, CNH Industrial, AGCO, Trimble, Titan International and Alamo Group.

On May 1, Monsanto announced it was terminating its agreement to sell Precision Planting to John Deere. The deal had been held up in a court battle based on a complaint the U.S. Department of Justice received from a competing manufacturer in August.

In addition to the Precision Planting deal, two other related agreements were also terminated, including the digital collaboration agreement between Deere and the Climate Corp., a division of Monsanto. Technology Editor Jack Zemlicka will have more details on the data side of the deal later in the program.

Also ending is an agreement that would have allowed Ag Leader to expand access to and distribution of certain Precision Planting products and technologies.

We reached out to attorney Todd Janzen of Janzen Agricultural Law to get his take on the news. He speculates there are 2 possible reasons the deal was terminated.

He says, “Perhaps it was the pressure from the Department of Justice that led Deere and Monsanto to conclude that trial was too risky, and too publicly messy, to go through. Trial is a long, expensive process, where much company time and energy is spent worrying about an uncertain outcome.”

Or, he adds, “perhaps Monsanto realized that it has enough worries currently with the pending merger to Bayer. If there is one thing that complicates a merger, it is having an uncertainty out there like a trial against the DOJ, followed by appeals. I am sure Monsanto is getting its house in order for the merger, and this was just one more thing.”

As for potential Precision Planting buyers, Janzen points to AGCO, CNH or Kinze as the most likely because they have established planting lines and distribution networks that could easily incorporate Precision Planting technologies. But, Kubota’s acquisition of Great Plains suggests that a foreign company could also be a suitor.

He says, “There are a number of foreign ag equipment manufacturers that would probably love this opportunity.”

This week’s Dealers on the Move include Wm. Nobbe & Co. and Simpson Farm Enterprises.

One of the more interesting elements of John Deere’s planned acquisition of Precision Planting from parent company Monsanto, involved the data collection capabilities provided by the hardware.

The cancellation of the deal included a digital collaboration agreement between Deere and the Climate Corp., which would have allowed for sharing of agronomic data between Deere’s Operations Center and Climate’s FieldView platform.

While Deere would have acquired the hardware side of Precision Planting, the data collection aspect would have remained with Monsanto. Had the equipment sale gone through, several precision dealers suggested the outcome could have given Monsanto access to the majority of planting data being collected in the market. Steve Cubbage, owner of Record Harvest, a Precision Planting dealer in Nevada, Mo., says he wasn’t surprised the acquisition fell apart, but he expects the data component will be a bargaining chip in negotiations with other potential buyers.

“Monsanto says they don’t want to be in the precision hardware business and in my opinion, they never did. They bought Precision (Planting) to gain access to the data and I think even with the Deere deal, that was a still a caveat as they said, ‘We’ll sell you the hardware business, but we retain the rights to whatever data flows through that technology.’ I think that is going to be the carrot and the stick in negotiations moving forward, because the last thing Monsanto will want to give up is access to that flow of data coming through that hardware.”

It remains to be seen how the termination of the sale will disrupt Monsanto’s long-term plans on the data collection side, but the company has stated it still intends to sell Precision Planting’s equipment business, valued at $190 million.

Ben Cherniavsky, analyst with Raymond James, says “Rocky has also shown positive trends in inventory management. The first quarter of 2017 is the sixth quarter of year-over-year inventories reductions. Management has indicated that the 2016 focus on inventory reduction, which negatively impacted margins, will now shift toward margin improvement.” 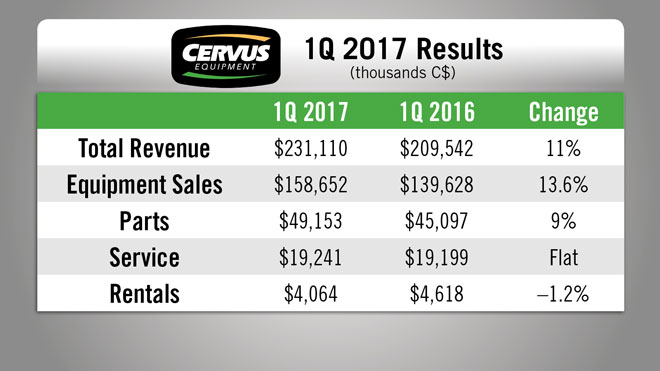 On May 11, Cervus Equipment, John Deere’s largest dealer group in Canada, reported first quarter revenues of $231.1 million, up 11% over the first quarter of 2016. 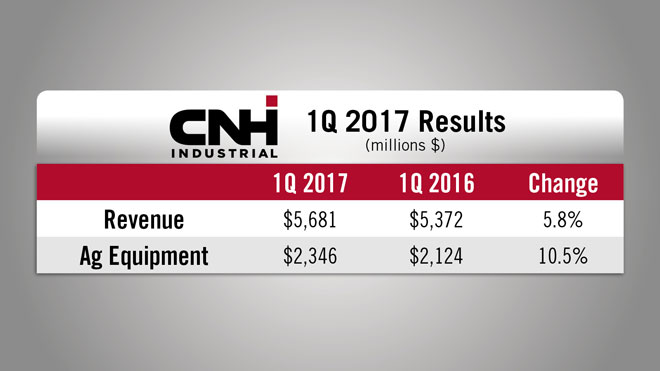 On April 27, CNH Industrial reported its first quarter revenues were up 5.8% year-over-year. Revenue from the sale of ag equipment for the quarter was $2.35 billion, up 10.5% vs. the first quarter last year. 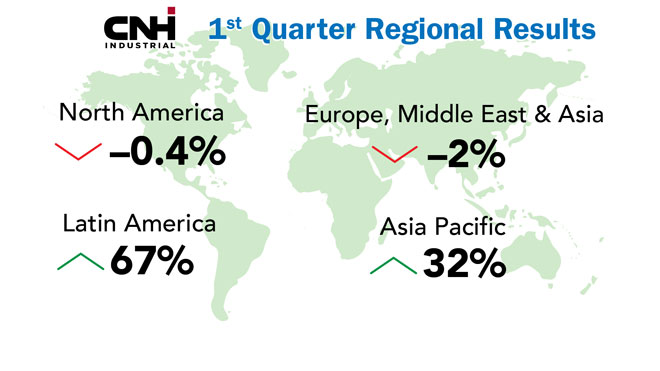 North American ag equipment sales were nearly flat at down 0.4%. Europe, Middle East and Asia also saw a slight decline in sales at down 2%. Latin America saw a big jump in sales during the first quarter at up 67% and Asia Pacific sales increased 32% in the quarter.

Commenting on the results, Seaport Global Michael Shlisky said, “We turned incrementally more positive following the call, as we got the sense that CNHI's results were skewing toward the higher end of the range; the company could take its outlook up next quarter depending on a few key items. These include: the status of government financing subsidies in Brazil, macro/political conditions in other key markets such as France and FX rates. We would add fundamental ag risks to this list, given the potential for continued oversupply of crops. CNHI also suggested that it might be the wrong time of year and point in the cycle to get bullish on ag in April.” 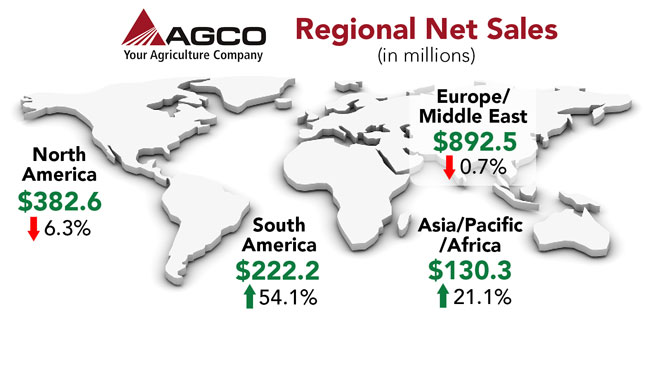 Commenting on AGCO’s South American sales, Ann Duignan, managing director at JP Morgan, said in a note, “Growth was driven by the improving political landscape in Brazil and more supportive government policy and crop production in Argentina. South American unit retail tractor sales are expected to be up 15% in 2017.”

This past week has been an “earnings week” with a number of ag equipment makers releasing their quarterly earnings reports. 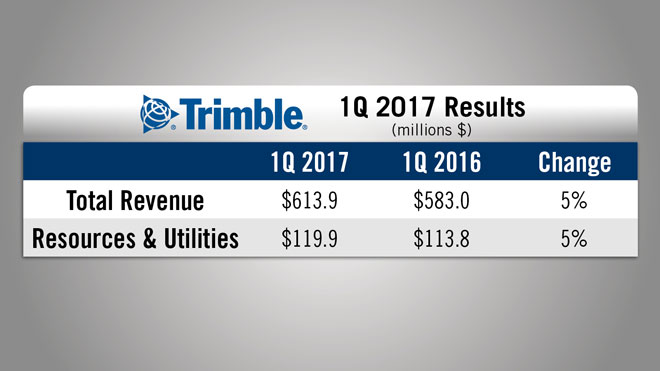 Trimble announced its first quarter revenue was $613.9 million, up 5% vs. the first quarter of 2016. Revenue for the Resources and Utilities division, which includes agriculture, was $119.9 million, also up 5%. 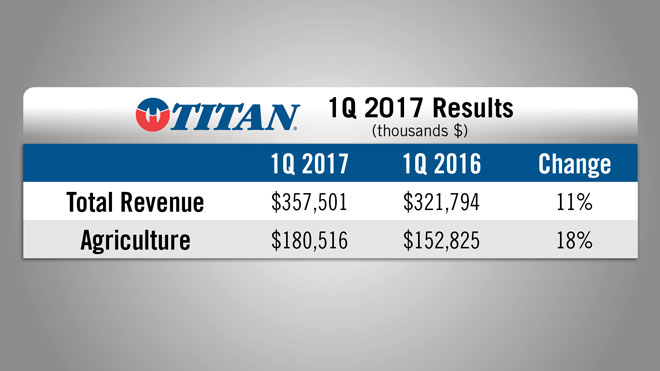 Ag tire maker Titan International reported its net sales for the first quarter were $357.5 million, an increase of 11% year-over-year. Overall sales volume was up 4% in the quarter, driven by higher volumes in both the ag and consumer segments. Ag segment revenue was $180.5 million, up 18% vs. the first quarter of 2016. 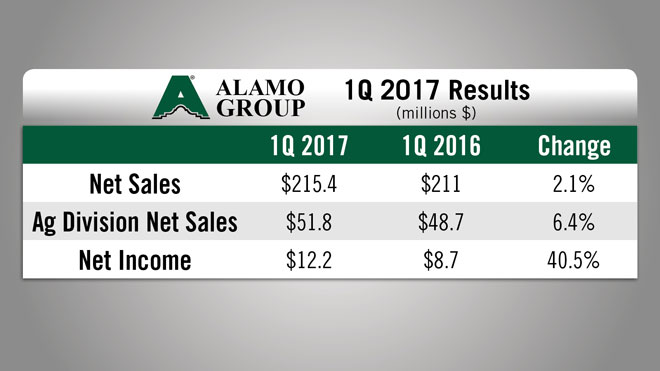 In 2009, a restored 1963 John Deere 4010 tractor was unveiled at Graceland. The tractor — a row-crop diesel — came with the property Elvis Presely purchased from Jack Adams in 1967. The tractor was sold by Planters Tractor, which today is known as Parker Tractor. The Deere wasn’t the only tractor Elvis had at Graceland. The first tractor he had was a mid-size International Harvester model 300, which the Davidson family caught him driving on film while driving from St. Louis to Florida. The video surfaced in 2007 when Bruce Marren posted it on YouTube.

As always, we welcome your feedback. You can send comments and story suggestions to kschmidt@lessitermedia.com. Until next time, thanks for joining us

[Podcast] What's Next for Precision Planting?