On March 16, North Dakota’s Gov. Doug Burgum signed into law a bill relating to “prohibited practices under farm equipment dealership contracts, dealership transfers and reimbursement for warranty repair.” The law goes into effect on Aug. 1 to allow manufacturers time to make the necessary internal adjustments to bring their processes into compliance.

We spoke with Matthew Larsgaard, president and CEO of the North Dakota Implement Dealers Assn., on how the new law will benefit dealers. He laid out two areas he believes are the most helpful provisions.

“I believe the most helpful provisions within our bill would include the following: 1. The bill establishes a fair process through which dealers may transfer or sell their dealership. 2. North Dakota state law currently requires manufacturers to reimburse dealers for warranty labor at the dealer’s non-warranty, customer pay rate. The bill enhances this law by requiring manufacturers to reimburse dealers for both parts and transportation at the respective dealer’s customer pay rate. One interesting dynamic to the warranty reimbursement concept, and our legislation, is that we have expanded the reimbursement provisions to apply to product improvement programs, factory maintenance plans, extended warranties and a number of others.”

He adds that the legislations was designed to add stability for North Dakota dealers by defining what would be considered an unfair business practice in respect to the requirements that may be placed on them. He notes that protections for the manufacturers were also built into the law, saying they wanted fairness for both parties.

This week’s Dealer on the Move is MirTech Harvest Center, which opened two new full-service Claas dealerships in Jonesboro, Ark. and Sikeston Mo. The facilities opened Dec. 1, 2016 and offer services for the full Claas equipment lineup. Class of America and MirTech’s partnership began in July 2016 to grow the business for Claas products in the western Delta region.

As dealer optimism continues to inch upward heading into the second quarter of 2017, no-till farmers are anticipating increased adoption of precision farming equipment this year.

Respondents to the 9th annual No-Till Farmer Operational Benchmark Study, forecast higher use of 10 different precision technologies in 2017, compared to the last 2 years. 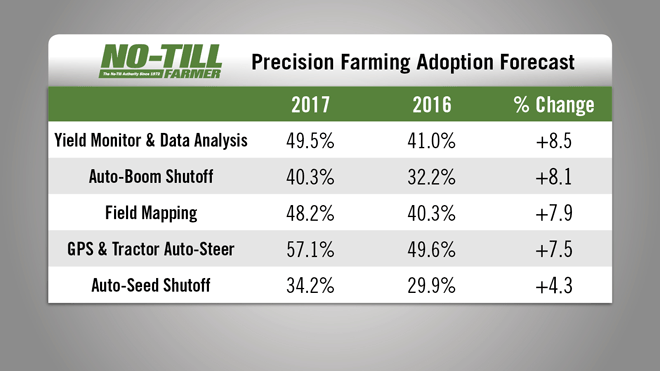 Topping the list is yield monitor data analysis, with about 49% of no-tillers planning to utilize the technology, a more than 8% increase over 2016 and 2015.

Also seeing a sizeable jump is planned adoption of auto-boom shutoff, from about 32% last year to more than 40% in 2017. Field mapping is on the rise as well with more than 48% of no-tillers planning to make use of the technology in 2017, compared to about 40% during the last 2 years.

While guidance and auto-steer systems may be considered standard precision technologies, 57% of survey respondents plan to use these precision platforms in their operation in 2017, up from just less than 50% the past 2 years.

It’s also worth noting that despite the forecasted increases in technology adoption, no-tillers only plan to spend about $200 more per farm on precision equipment than a year ago, according to the study.

In 2016, no-till farmers averaged about $2,400 per farm in precision farming expenditures. This year, they forecast spending an average of about $2,600 per farm. 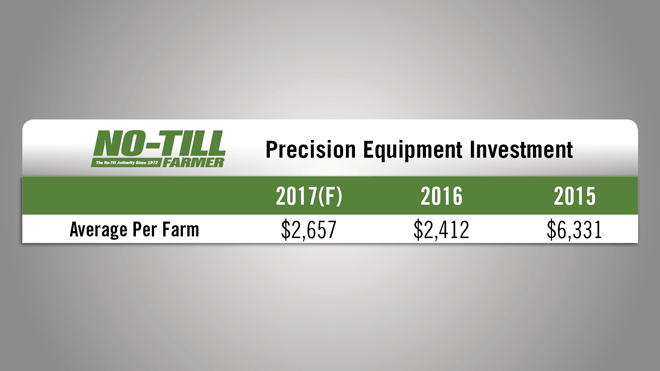 However, it’s worth noting that survey projections made at the start of the year, don’t always coincide with end of the year totals. In 2015, no-tillers exceeded their planned expenditures on precision farming products by more than double.

They initially forecast an average investment of about $2,600 per farm and reported spending more than $6,300 per farm on average.

Speaking at USDA’S 2017 Agricultural Outlook Forum last month, Luke Chandler, Deere’s deputy chief economist, said, “2016 was the third year in a row for declining sales for us, only the third time in our history this has happened. We’re hoping that 2017 does not create new history for us.”

According to Chandler, between 2013 and 2016, John Deere net sales from equipment operations declined in every major regional market.

In the U.S. and Canada, sales fell by 34%; in Latin America they’re down by 49%; in Western Europe net sales dropped by 27%; in Asia, Africa and the Middle East, they’re down by 29%; in Central Europe and CIS net sales are down by 19%; in Asia Pacific, Australia & New Zealand, they are flat for this 3 year period. 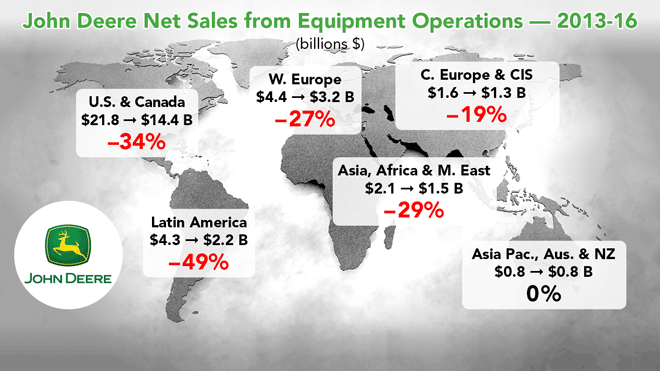 Rocky Mountain Dealerships, Case IH’s largest dealer in Canada, reported its fourth quarter and year-end results on March 14. For the full year, sales came in at $930.4 million, a drop of 4.6% vs. the previous year. Fourth quarter sales were in line with the same period in 2015 at $285.7 million.

The dealership group made strides in inventory reduction both for the quarter and the full year. Inventory declined by $2.9 million in the fourth quarter. During 2016, Rocky lowered its equipment inventory by $57.1 million to $403 million, surpassing the targeted reduction for the year. 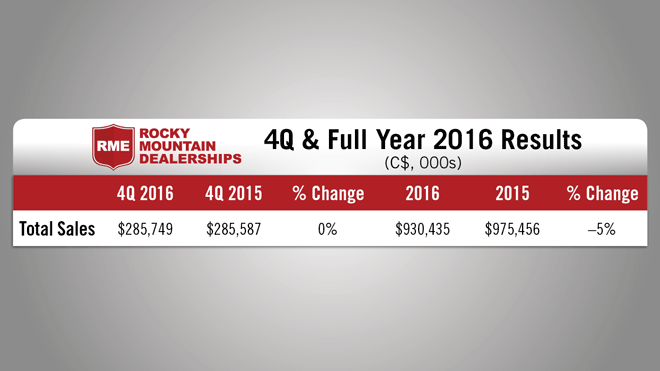 Commenting on Rocky’s results, Ben Cherniavsky, analyst with Raymond James, notes the company has been plagued by “self-inflicted” problems over the last few years. But, he adds, “We believe management has done a good job restructuring its challenged operations and making the proverbial ‘silk purse of a sow’s ear!’ Costs have been cut; inventories are down; and debt has been reduced. There is still more work to be done and demand has yet to rebound, but the market appears to be firming with more quoting activity and longer OEM lead times.” 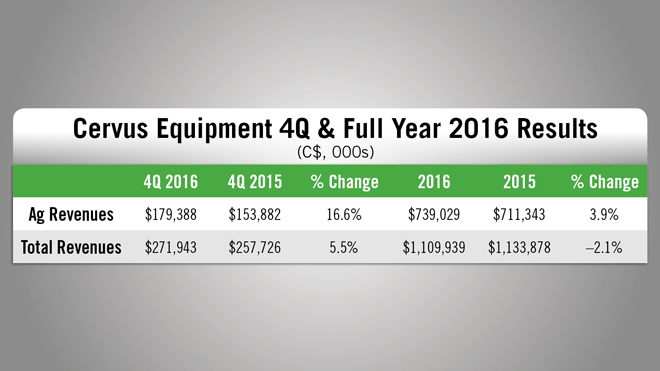 The dealership reduced inventories by $20 million from the previous quarter and by $63 million year-over-year.

Cherniavsky notes that end market demand appears to have bottomed, but he says he doesn't see “any evidence that significant revenue growth is poised to resume this year.” 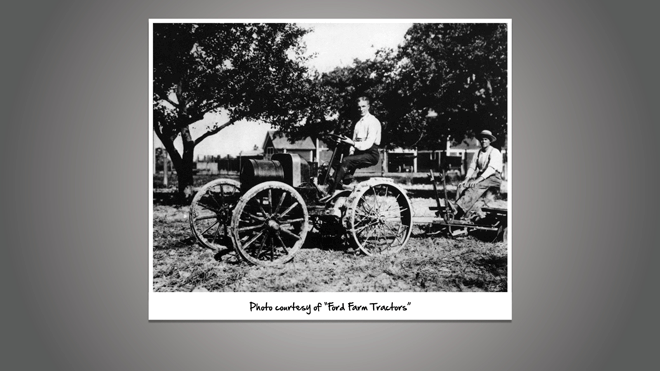 Henry Ford completed his Automobile Plow in 1905, using a Ford Model B automobile 4-cylinder engine and planetary transmission. His chief engineer, Joe Galamb, heavily modified a Dodge Brothers frame, bringing it to a point in front for maneuverability. The rear wheels came from a ground-powered corn binder. In 1907, Galamb improved the Automobile Plow by replacing the cylindrical convection radiator with one from Ford’s luxurious Model K auto. He relocated the fuel tank above the front axle to improve traction and installed a coil box.