In today’s newscast, we dive into some surprises in Machinery Pete’s fourth quarter Used Values Index, highlights from the Precision Farming Dealer Summit, why ag machinery stocks continue to rise despite the ag market and more improvement in producer sentiment.

Greg Peterson, better known as Machinery Pete, recently released his fourth quarter Used Values Index. There were some surprises during the fourth quarter and November and December saw very strong prices for used equipment, particularly for planters and combines.

We caught up with Greg during the Precision Farming Dealer Summit last week in St. Louis and talked with him about some the surprises he saw this quarter.

“We just released our Fourth Quarter Machinery Pete Used Values Index, our quarterly look at used values based on auction prices, and we did have a couple of very surprising sectors in fourth quarter 16. One was planters. November and December we started to see much stronger auction prices on large late model planters and frankly it surprised me a little bit. But again, that was interesting to see and one thing that matched up with that is the search traffic data we noticed at MachineryPete.com late in 2016. Big increases in the number of farmers looking for planters. We saw that in the third quarter and in the fourth quarter. Then again, auction prices went higher late in the year and we really saw the same thing with combines. Again, it surprised me the strength of these auction prices but again a lot of one and two year old combines selling for very strong auction prices. My index rating went up on combines and planters a little bit more than I thought it would.”

We’ll have more from Machinery Pete as it relates to the different trends he’s seeing in the used equipment market next time.

This week’s Dealers on the Move are Ag-Pro Companies, Pattison Agriculture and Bucklin Tractor & Implement.

The Jim Pattison Group has consolidated its John Deere dealerships in Saskatchewan and Manitoba under one name. Maple Farm Equipment and J ayDee AgTech have been rebranded as Pattison Agriculture. The group has 17 stores.

Having returned from the second Precision Farming Dealer Summit last week in St. Louis, I’ve had an opportunity to reflect on a few of the highlights.

The sold-out conference drew nearly 200 attendees including representatives from more than 50 dealerships throughout 27 states, along with Canada and Australia. With a theme of Proven Business Blueprints, the event featured discussions on tips for transitioning a precision business, improving staff accountability and the real ROI of service packages.

Here are 3 of the top takeaways from speaker sessions at this year’s Summit:

1. Find your HABU as a precision business owner to shape direction and focus on future goals.

2. To accurately measure margin on precision service plans, understanding and meeting the needs of different customers is required homework.

“On average, we realize an 8-10% margin on service plans. So is it a huge profit center? No, but as you look at your geography, you’ll find that the early adopters and the innovators are the ones who are going to call and you’re going to be doing reactive phone calls and running to put fires out when you’re trying to do something else and it turned out to be something rather simple.”

3. Consider the core purpose of your precision farming and how it can effectively integrate with other areas of the dealership.

“If you guys really want to know what our customers want when you are building these (service) packages, get your parts, your service and a salesperson together and go sit down with one of your key customers and have a 2 or 3 hour discussion about their pressures, their plans and their problems. You’ll find our real quick what you need to build a package around.”

A Bottom for Earnings in 2017, But Not Revenues

Despite the overall ag economy being down, ag machinery stocks outperformed the S&P Machinery Index and the S&P 500 in 2006, according to Seaport Global Securities. 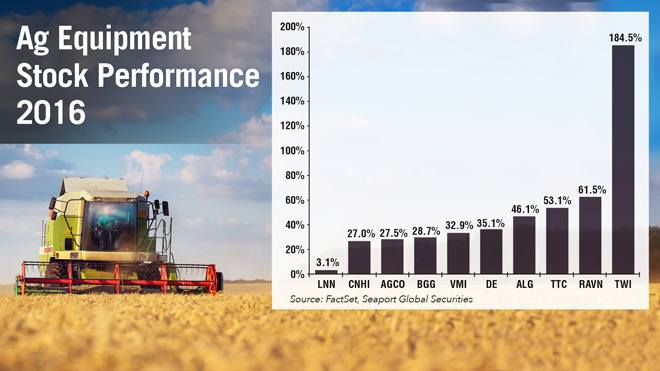 We spoke with Michael Shlisky, the machinery analyst with Seaport Global, to get his take on why stocks have continued to rise despite the market conditions. He says stocks have gone up because there’s been talk that this is the bottom so people start trading at high multiples. He adds that the substantial uptick in the stock market as a whole has resulted in people looking for anything that “hadn’t run even a little bit” at the end of 2015. Simply put, people were buying everything, which included ag stocks.

“The stocks in the agricultural equipment sector have certainly started to recover and have reached multiyear highs in the last month or two. To us it seems like you might see the prices in a trough for earnings if not a trough for the revenues. In our view, we think that most of the ag equipment OEMs forecasts for modest declines in ag revenues in 2017 can be offset by some of the cost cutting and restructuring plans that most of the companies have in place, so that would suggest an earnings trough at some point in 2017. We do think there is downside risk to crop prices, but for now we are seeing something of a trough in earnings, which could last over the next 12 to 18 months.”

While Shlisky sees a trough for earnings, he doesn’t think that’s the case for revenues.

“Most of the ag OEMs still see a decline in heavy North American tractor and combine sales. That’s due to the ongoing overhang of excess equipment in the channel as well as continuing pressures on crop prices and farm income this year. But once again it looks like some of the cost cuts these companies have in place should offset most of that.”

On Jan. 10, Purdue University’s Center for Commercial Agriculture released its December Ag Economy Barometer Reading. The latest reading of 132 marks the second month in a row that the index has increased, and is the highest reading since October 2015. 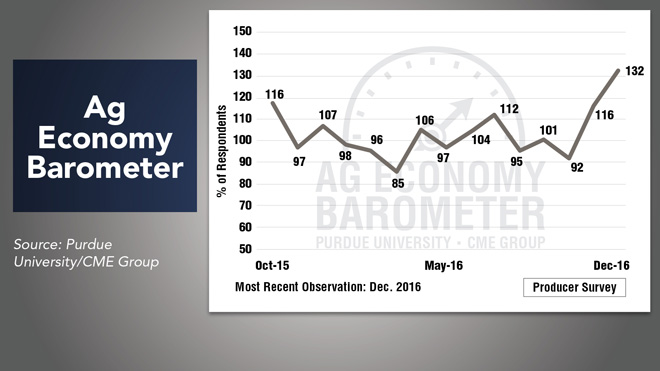 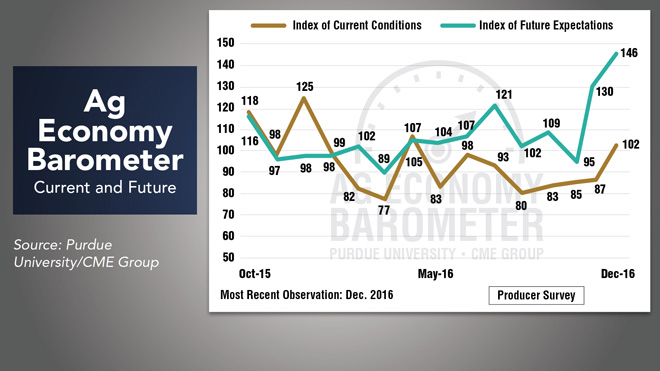 The Index of Current Conditions has been trending higher since September, but the improvements were quite modest until December. At a value of 102 in the latest reading, the measure of current economic conditions was 15 points above the November reading and 22 points above its August low of 80.

If sentiment continues to improve, dealers could start to see farmers who are looking to replace or upgrade their equipment. That’s still a big if as nearly two-thirds of the producers surveyed indicated the financial conditions of their farming operations were worse in December 2016 than a year earlier. 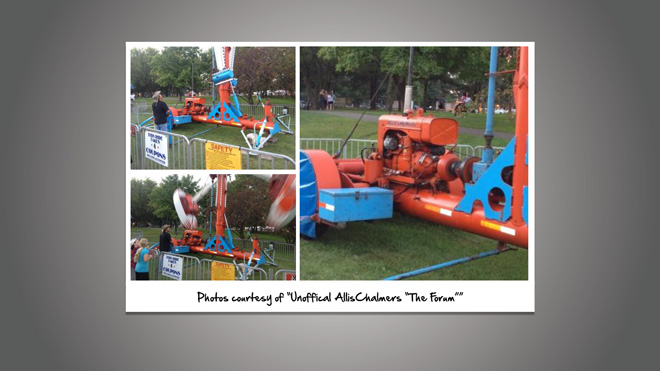 Allis Chalmers engines did not only power tractors and other agricultural machinery, but also carnival rides such as the Ferris wheel, carousel and Tilt-A-Whirl. Up to 90% of carnival goers may have been powered by AC engines, and for rides that have not switched to electric power, these motors still are making the carnivals come to life.