Ag Equipment Intelligence editors caught up with Versatile President Dmitry Lyubimov during the 2016 Versatile Dealer Meeting in Winnipeg on November 17.

During our conversation, Lyubimov put some rumors to rest, specifically those about acquisition on both sides of the equation. He says the Russian ownership is committed to the company and its dealer network.

During the meeting, Versatile officially announced the company’s new branding efforts. According to the company, “The return to the heritage Versatile colors had always been discussed but it wasn’t until the success of the Legendary Limited Edition that confirmation was received that the true Versatile colors are red, yellow and black, which will be incorporated into the 2017 models.”

This week’s Dealer on the Move is Vanderloop Equipment. In November, the AGCO dealership based in Brillion, Wis., opened up a third location that will sell Claas tractors and hay and forage equipment. The new 30,000 square foot facility is in Beaver Dam, Wis., and

GPS and guidance systems might be technology taken for granted in some precision farming circles, given they were some of the earliest innovations adopted on farms.

But the success of these systems is still rooted in signal reliability. Acquiring and maintaining a connection can be a challenge, even as cellular networks have become increasingly reliable.

One of the ongoing objectives for the Western Equipment Dealers Assn., is to improve the strength and speed of rural broadband. This was a point of emphasis at the association’s recent annual dealer meeting in Scottsdale, Ariz.

Current infrastructure to support wireless connectivity and advanced precision services such as remote support, is lacking in rural areas of North America, according to Eric Wareham, director of government affairs for the association.

A catalyst for seeking broadband improvements is concern among farmers over travel distances to dealerships and repair costs, Wareham says. A more reliable network would allow dealers to better provide remote services tools to farm customers.

“It’s no secret that we have consolidation within the industry. That’s been going on for a long time now. I think when you infuse the challenge of technology advancing, together with the consolidation, dealerships are just simply farther apart. And I think that we have an opportunity now to make that less of an issue. It’s been a concern for a while, but I think it’s something that technology — if we utilize it correctly — can cure that problem.”

Wareham added that the association is currently working with different stakeholders, including farmers, dealer members and legislators to better utilize available grant money for improving rural broadband, along with seeking new funding sources to expand connectivity. 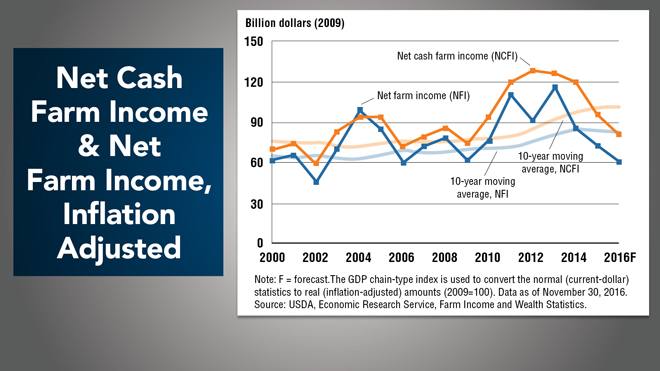 Both measures have been trending downward since 2013, and the latest forecast shows the decline continues in 2016. ERS forecasts net cash farm income and net farm income for this year to be $90.1 billion and $66.9 billion, respectively.

Cash receipts declined across a broad set of agricultural commodities in 2015, and are expected to fall further in 2016 — primarily for animal/animal products.

Production expenses are forecast to contract in 2016, but not enough to offset the commodity price declines. Both measures are below their 10-year averages, which include surging crop and animal/animal product cash receipts from 2010 to 2013.

Despite the forecast decline, Agriculture Secretary Tom Vilsack noted the forecast shows the health of the overall farm economy is strong in the face of challenging markets. After reaching record levels in 2012 through 2014, net farm income has been trending downward

He says: "As we saw in the August forecast, the estimates again show that debt to asset and debt to equity ratios — two key indicators of the farm economy's health — continue to be near all-time lows, and more than 90% of farm businesses are not highly leveraged. Median household income for farming families remains near historic highs and is expected to remain stable relative to 2015. In 2016, higher off-farm earnings are expected to help stabilize losses due to low commodity prices. 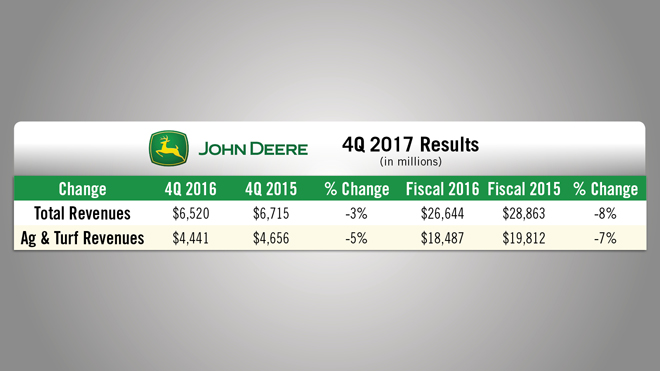 Net sales for the ag and turf division were down 5% compared to the same period last year, and were down 7% for the year.

Lower sales in the quarter were recorded in nearly all regions, most notably in the U.S. and Canada. However, South America did see higher sales, led by Brazil and Argentina.

On a positive note and looking ahead to 2017, Deere is forecasting worldwide sales of agriculture and turf equipment to be down by only about 1%. In the U.S. and Canada, sales are forecast to be down 5-10%. This suggests that the sales of production ag equipment are finally hitting bottom. It also confirms the results of our 2017 Dealer Outlook & Business Trends survey, which found that nearly half of dealers are forecast sales to be relatively flat in 2017. 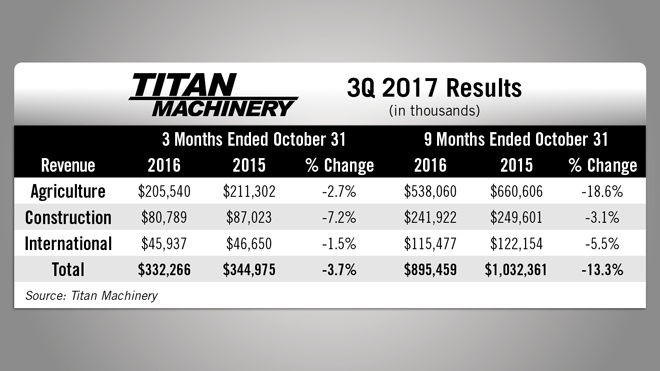 The dealership updated its Fiscal 2017 outlook and is now expecting agriculture same store sales for the year to be down 13-18%. 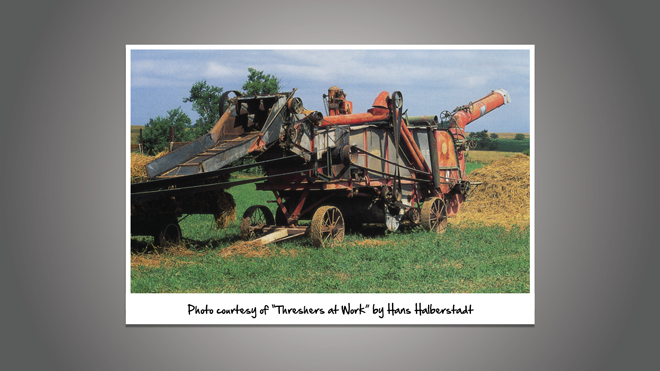 In 1842 Jerome Increase Case founded the Racine Threshing Machine Works, innovating the current thresher to separate the straw from the grain. Over the next two decades, the company worked to diversify the power sources for the thresher. Case would come to dominate the thresher market up until 1953 when the last one was built.

As always, we welcome your feedback. You can send comments and story suggestions to kschmidt@lessitermedia.com. Thanks for watching I’ll see you next time.