North American farm equipment dealers are somewhat more optimistic about the prospects for increasing revenues in 2017 than they were heading into 2016, according to Ag Equipment Intelligence’s Dealer Business Outlook & Trends survey. 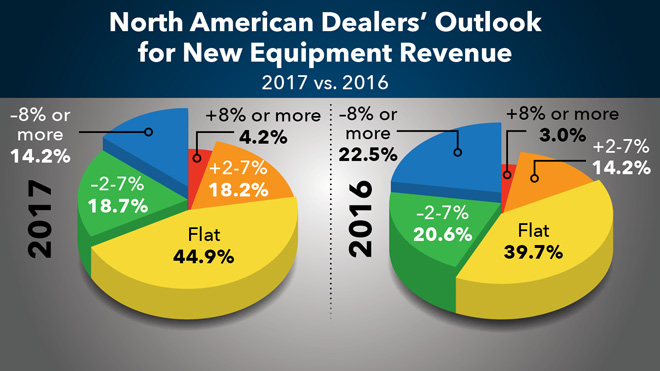 About one third of dealers responding to the survey are expecting new equipment sales revenues to decline compared to 43.1% who expected declining revenues in 2016.

Executive Editor Dave Kanicki notes that in all likelihood, the slightly more optimistic results from the 2017 survey vs. those of a year earlier shouldn’t be construed as a sign that dealers expect a near-term turnaround in the ongoing sales slump. On the other hand, it may be an indication they believe sales of production ag-type equipment are finally hitting bottom.

The complete Outlook & Trends report was sent to Ag Equipment Intelligence subscribers last week and is available at www.AgEquipmentIntelligence.com

This week’s Dealer on the Move is Rocky Mountain Equipment. The dealership announced it will be closing its Barrhead, Alta., location, which served as a parts and service center for New Holland equipment. The seven employees will be transitioned to the Westlock location. The store will close on Dec. 31.

Anticipation mixed with a little anxiety as to how soon autonomous vehicles will be roaming farm fields in North America continues to build. Some experts and manufacturers forecast that within the next 3 years, the autonomous industry will begin to take shape in agriculture.

But just how long will it take for this progressive technology to become a lucrative machinery market? In less than 10 years, the driverless tractor market will be a multi-billion dollar industry, according to a recent study of robotic opportunity in the ag market.

But driverless tractors will likely also be scalable, making them more adaptable and affordable, according to Dave Farb, founder of Farb Guidance Systems, which is developing its own autonomous technology.

“You ask yourself why did we get so big in the first place with the technology in tractors and the pretty simple answer was so one person could get a lot of work done in a short period of time. When that person isn’t on the platform, you can have as many of those machines out there as you want and actually they become quite cost effective when that’s the case and in some cases actually cheaper than the cost today, per foot, per machine running in the field. ”

While the Tractica report projects a robust market for driverless tractors in the near future, it will be interesting to see if revenues are driven by sales of large machinery, smaller-scale robotic technology or a combination of both.

Earlier this month at the corporate headquarters in Rocester, England the company unveiled a pair of high horsepower models of its Fastrac tractor line. Its new 8290 at 272 PTO horsepower and 8330 models extend JCB’s PTO horsepower to 310. The company feels the additional horsepower will open doors to row-crop applications where high speed planting, vertical tillage and grain cart transportation will fully utilize the tractor’s front and rear suspension and ABS braking. Fastracs are capable of road travel up to 43 mph, and greater field speeds than tractors with conventional suspensions, without operator discomfort, according to the company spokesperson.

Richard Fox-Marrs, president of JCB Agriculture, says the company has the products to gain market share and has set lofty goals to add dealers in North America, to increase their customer base:

While the product introduction was based around tractors, Fox-Marrs sees a large opportunity on the horizon to increase sales of material handling equipment. Livestock producers in Europe and the U.K. have largely converted to wheel loaders and telehandlers for handling tasks, while the North American market still uses conventional tractors with front end loaders. If the trend materializes, JCB could be poised to offer products that offer growth potential for agriculture dealers:

Fox-Marrs acknowledges that finding new distribution outlets is difficult with the current economic situation which is why the company is targeting existing dealers of the “big four” agricultural OEMs, with an existing customer base, to sign up for the JCB franchise. 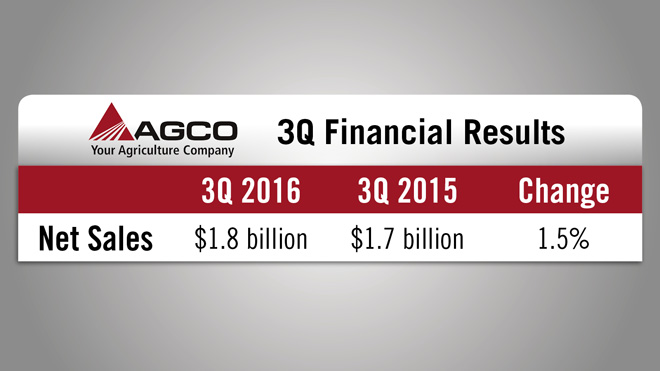 Looking at the company’s regional results, North American was the only region to see a drop at down 8.5%. Sales for Europe/Africa/Middle East were up 1.7%, South American sales were up 13.1% and Asia/Pacific sales increased by 18.6%. 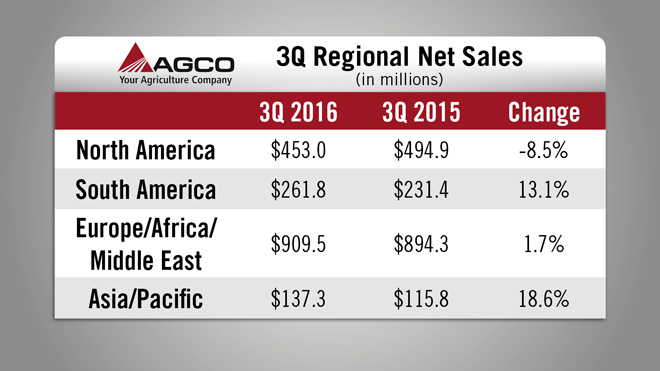 AGCO’s market outlook was unchanged for Europe at flat to down 5% and North America at down 10-15%. But, AGCO now expects South American to be down 10-15%, an improvement from their previous forecast of down 15-20%. The company did not offer any comments on their forecast for 2017.

This week, AGCO also rolled out a no interest, no payment offer on parts and service transactions. Now through the end of the year, AGCO Plus+ account holders can take advantage of the offer for 180 days on any AGCO parts and service purchase over $1,000.

And now from the Implement & Tractor archive… 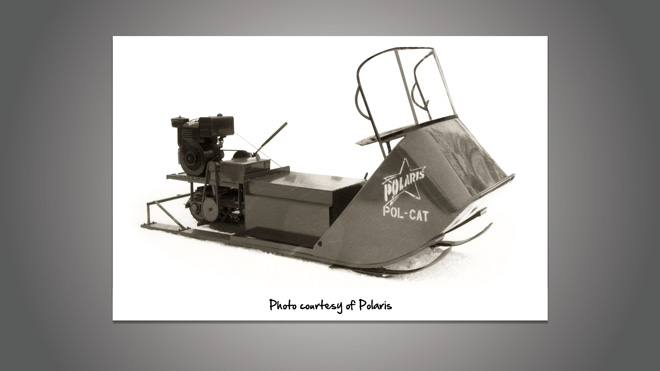 During the winter of 1956, David Johnson sliced a car bumper in half to make skis, used scrap lumber and a Briggs & Stratton engine designed for lawn mowers to create a machine that would let him zip through the snow in Northwestern Minnesota. His invention would come to be known as a “snow mobile.” He did all of this while his boss at Polaris Industries, Edgar Hetteen, was on vacation. Hetteen was mad to see his employee taking time away from making straw chopping machines, but soon after Polaris transitioned from farm equipment manufacturer to making recreational vehicles. Johnson died earlier this month at the age of 93.

As always we welcome your feedback. You can send comments and story suggestions to kschmidt@lessitermedia.com. Thanks for watching, I’ll see you next time.