In today’s newscast we discuss AGCO’s decision to introduce the 1000 Vario tractor as both a Fendt and a Challenger model, something the manufacturer has never done before, how one dealer has integrated crop insurance into its precision farming department, how the current ag economy is impacting farmers’ working capital and the attention agribusiness mergers, like that of Bayer and Monsanto, are getting on Capitol Hill. 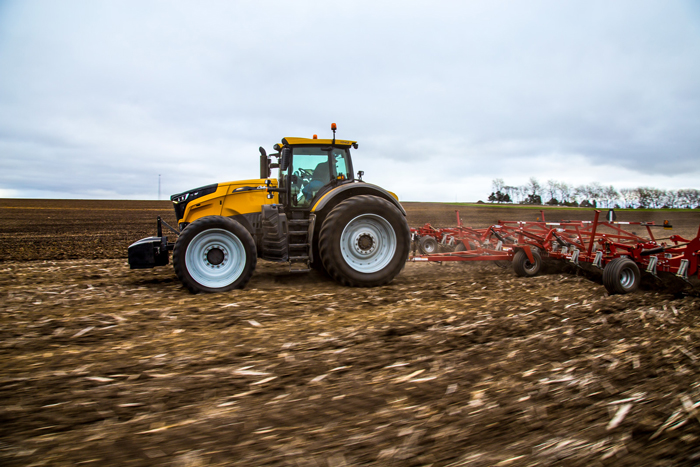 For the first time in Fendt’s 85 year history, the AGCO brand is introducing a tractor in a color other than it’s usual green. During the Farm Progress show earlier this month, AGCO introduced the 1000 Vario series row-crop tractor as both a Fendt model and a Challenger model.

The new tractor has been described as a “technology tour de force,” and introduces automatic torque distribution to the front and rear wheels to help maintain traction. It also has on-board tractor and implement tire inflation pressure management and a host of precision farming functions through the VarioTerminal touchscreen.

“The reason for AGCO to launch the Challenger 1000 series in North America was very simple. The fact that it came in and completed our product line in that high 300 to 500 horsepower wheel tractor market … Now this Challenger 1000 basically comes into play in that 400-500 horsepower market like I said and we believe this product will do a much better job than the current small frame articulated tractor that’s being offered to our North American customers. So by having also this Challenger brand with this product, we know with Challenger we’ve always been after the cash crop grower market and this is where our Challenger brand has a strong foothold and this will help our dealers to expand into that market.”

Kohnen says this introduction will give North American Challenger dealers a tractor to compete with small frame 4WD tractors. He also says it’s better for the farmer, who will get a better return on investment because it can be used for more functions around the farm vs. small frame articulated tractors.

Production on the 1000 series started this month with 170 units scheduled for the year total. Dealers will have them on their lots by the end of December.

This week’s Dealer on the Move is Robert’s Farm Equipment. The New Holland dealer opened its third store in Mount Forest, Ontario. It has two other locations in Chesney and Lucknow.

In the coming weeks, yield monitor data will begin being pulled from combine cabs as farmers and their advisors crunch the numbers on 2016 harvest totals. Talking with farm equipment dealers who have integrated agronomic services into their product-based precision farming business, it’s clear that many are still striving to carve out a profitable niche, especially in markets where farmers have multiple retailers or consultants soliciting these services.

One way dealers are beginning to bridge this gap is by tapping into a service intertwined with data collection and also one that farmers need — crop insurance. Agents are often first in line to validate yield data collected by farmers and I’ve visited a few dealers who collaborate or even office-share with a local crop insurance agent, primarily to create a two-way street for customer referrals.

Van Wall Equipment, a John Deere dealership group based in Perry, Iowa, began selling crop insurance in 2015, one year after it added agronomic services. The dealership has 4 in-house agronomists and 10 precision specialists spread throughout its 16 ag stores, with each of the specialists also a certified crop insurance agent.

Van Wall’s Integrated Solutions Manager, Scott Meldrum suggests that 40% of the crop insurance policies sold in Iowa last year were in error because the data used to create them wasn’t accurate. An advantage to offering crop insurance is that the dealership can leverage the service to strengthen customer relationships and confidence.

While still a rarity among farm equipment dealerships, selling crop insurance through the precision department would seem to be a natural affirmation of data management as a valuable service. Meldrum adds that once a customer realizes they haven’t put that data to work for them, the crop insurance is a very easy discussion to have.

Working capital on Illinois farms decreased in 2015, and given 2016 income prospects it is likely that additional decreases in working capital can be expected, according to Gary Schnitkey with the Department of Agricultural and Consumer Economics at the University of Illinois. 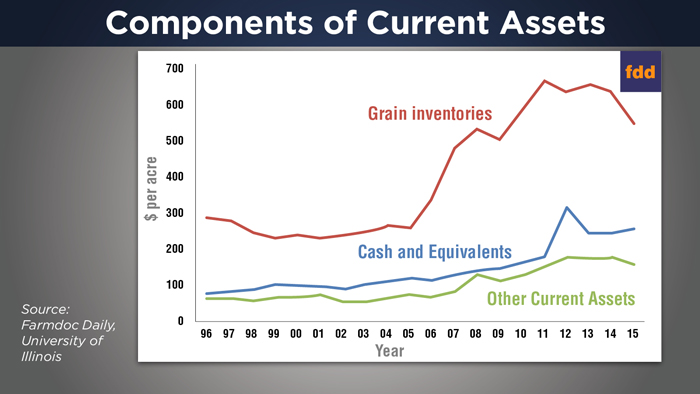 That said, reductions in working capital do not necessarily signal a time of financial stress in agriculture, according to Schnitkey. He says while incomes will once again be low in 2016, most farmers will have the financial reserves to handle shortfalls in cash. It could mean trouble in the future though.

Schnitkey says at the end of 2016, many farms won’t have large working capital reserves compared to historical levels. “If 2017 is a low income year, cash shortfalls will again occur. Working capital reserves may no longer be large enough to cover cash shortfalls. Farmers may have to use other methods of meeting cash shortfalls including 1) refinancing short-term debt into longer maturity debt and 2) liquidating assets. Lenders may seek FSA guarantees for operations that are becoming financially questionable.”

Commodity prices are the best gauge of whether or not we’ll continue to see low farm incomes. Schnitkey says as long as corn prices remain below $4.00, working capital and financial situation on grain farms in the Midwest can be expected to deteriorate. Large cash shortfalls will occur on most farms when corn prices are $3.50 per bushel or below.

The consolidation trend in agriculture continued in a big way when Bayer acquired Monsanto for $66 billion. Bayer and Monsanto had been in talks since the spring, and last week the deal became official.

The companies report that the merger will “realize a shared vision of integrated agricultural offerings, delivering enhanced solutions for growers and creates a leading innovation engine for the next generation of farming.” 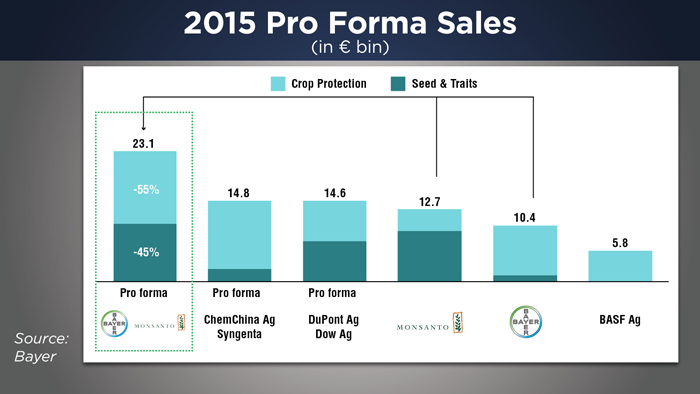 Bayer and Monsanto’s combined 2015 sales for crop protection and seeds & traits products would make them the industry leader, ahead of the two newly combined companies of ChemChina Ag and Syngenta and DuPont and Dow.

The continuing consolidation trend in ag hasn’t gone unnoticed, and is drawing a lot of scrutiny. Of the top six U.S. and European agribusiness companies, all but one are in talks for a merger or buy-out. Earlier this week executives from Monsanto, Bayer, DuPont, Dow Chemical and Syngenta met with the Senate Judiciary Committee.

While the executives argued the consolidation in the industry will create efficiencies and will bring new technologies to the market, critics aren’t so sure. Senator Amy Klobuchar of Minnesota noted that with all these mergers taking place only a few companies would be left at the top. She said:

“Our farmers and consumers face enough challenges without the additional benefit of an anti-competitive market. The three transactions before us are substantial. Taken together they reduce the six major agribusiness firms to four.”

Chip Bowling, a Maryland farmer and president of the National Corn Growers Assn. says his organization is concerned about what the merger could mean for crop input prices, especially given the current ag economy. Similar concerns were raised in mid-June over the Dow and DuPont merger, according No-Till Farmer editor Frank Lessiter.

If crop input prices go up as a result of the merger, that could spell continued bad news for farm equipment dealers and manufacturers who are already paying the price in the form of declining equipment sales. Equipment purchases continue to be one of the first items to go when farmers are looking to cut their production costs.

The two companies now face the challenge of getting the merger approved by regulators both in Europe and here in the U.S.

Deere & Co. has been making news — particularly as of late — for acquiring other manufacturers to expand its product portfolio. But this isn’t new territory for Deere. The farm equipment manufacturer explored a new market back in 1899 when it acquired the buggy business of Mansur & Tebbetts. By 1902, the buggy business had grown so much that Deere needed to build a new plant in St. Louis.